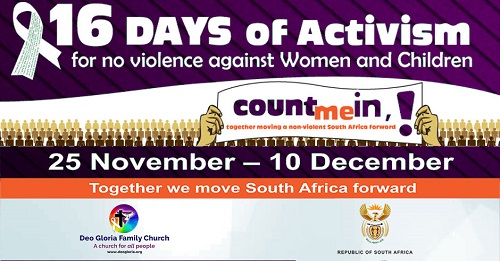 South Africa has some of the highest abuse, femicide and rape rates in the world, yet surprisingly did not make Reuter’s list titled: ’10 Most Dangerous Countries for Women.’ Every year, from November 25th to 10 December 10th, the 16 Days of Activism for No Violence against Women and Children campaign takes place in South Africa.

This campaign attempts to raise awareness regarding the different kinds of violence committed against women and children. This includes physical violence such as domestic abuse, rape, assault and murder; and emotional violence such as verbal abuse.

South Africa is a country rife with inequality, poverty, and unemployment. The degradation and humiliation created by these factors serve as a breeding ground for violence against women and children. Men, feeling inadequate in their roles as breadwinners, take their frustration out on their spouses and children, creating an endless cycle of violence.

During the 16 days, South Africa’s government officials and other activists convene across the country, discussing problems and solutions, as well as creating dialogues and platforms for victims to come forward.

The objectives of the 16 Days of Activism campaign are to raise awareness about violence perpetrated against women and children, create a sense of collective responsibility by involving various sectors and groups, and stress that together, a solution against this violence can be found.

During the 16 days, men, women, and children across the country wear white ribbons as a symbol of peace and condemnation of violence against women and children.

Many events occur during these 16 days in which the general public participates. These events encourage women and children who have been violently abused to come forward and report it to the police and emphasise how patriarchal cultural traditions assist in normalising violence and sexism.

The 16 Days of Activism campaign is not an isolated movement. It forms part of the #365DaysofActivism campaign, which encourages year-round activism for no violence against women and children, as well as the #CountMeIn campaign which attempts to raise awareness in all spheres.