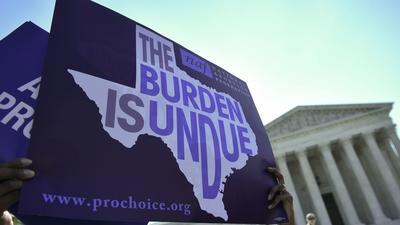 Photo Courtesy of the Chicago Tribune

Upon August 15th, 2017, Texas politicians, inclusive of Governor Greg Abbott, convoked to sanction House Bill 214, which, in accordance with Texas Legislature Online, is “Relating to health plan and health benefit plan coverage for elective abortion.”  In consequence of Texas Republicans’ unfavorable paradigm with regards to reproductive rights, the measure was, indeed, ratified.

In a statement disseminated by The Texas Tribune, Gov. Abbott decreed, “As a firm believer in Texas values, I am proud to sign legislation that ensures no Texan is ever required to pay for a procedure that ends the life of an unborn child[.]  I am grateful to the Texas Legislature for getting this bill to my desk, and working to protect innocent life this special session [sic].”

Howbeit, individuals encompassing reproductive rights advocates, medical specialists with the American College of Obstetricians and Gynecologists, legislators throughout the Senate and House of Representatives, and commoners attuned to the newscast sequence have vehemently vocalized their condemnation and intolerance of and for the policy.  In fact, abortion rights activists have coined its moniker “rape insurance.”

In summarization, HB214, with reference to Broadly – Vice,  “—mandates abortion coverage be removed from all private, state-offered, and Affordable Care Act insurance plans and sold as a separate — and unprecedentedly specific — policy.  What this means in theory is that people who want to be covered in the event that they need an abortion will have to purchase extra insurance for it.  In practice, it means insurance companies may simply stop covering the procedure altogether, the profitability of an ‘abortion-only’ add-on being questionable at best.”

Therefore, the apposite denomination “rape insurance” is as a result of the exclusion of sexual assault, incest, and fatal fetal abnormalities from already negligibly accessible insurance coverage.

Candice Russell, a self-proclaimed queer, Latina storytelling fellow with the National Network of Abortion Funds, deliberated the anti-choice tactic of inflating insurance premiums, thus diminishing convenience to the predominance of the population, “We talk about healthcare in broad terms as a right[,] and then we live in a society where your ability to access healthcare is based on your wage, and that’s asinine to me.

‘[…] Even if it just affects one person, one person is too many[.  HB 214] is a warning sign to maybe try harder instead of just feeling safe, to push for progressive things within your state and set that precedent so that we have something to really hold onto…because at this point, we have nothing.'”

Houston Sen. Sylvia Garcia, essayed to foreground its feasible detriment—chiefly to low-income households—whilst impelling her colleagues to indoctrinate an exception for products of rape and incest.  Nevertheless, Garcia was vanquished on a twenty-to-ten democratic vote.

Furthermore, “‘Over the past couple of sessions, the legislature has decided they don’t want to make exceptions for horrible fetal conditions,’ laments Dr. Sealy Massingill, the chief medical officer for Planned Parenthood of Greater Texas and a member of Physicians for Reproductive Health.  ‘Women who have these conditions and need to have a termination in the hospital, especially if they’re medically ill—these bans make it difficult to access care.  To further restrict women who are already in painful and difficult situations, give them one more thing to be stressed about… it’s unconscionable.'”

Elizabeth Graham, director of Texas Right to Life, disavows these sentiments as a proponent to the legislation and anti-abortion demonstrator.  In an assertion to a Texas Senate committee, Graham averred, “One of the talking points we’ve heard lately is abortion should be considered health care[.]  Really, the definition of health care is to make a person well and to encourage health.  The definition of a successful abortion is the complete death of the unborn child.”

Albeit abortion rates throughout The Lone Star State have plummeted from 82,000 within 2006 to 54,300 within 2015, this is fundamentally a culmination of the lion’s share of Texas’ abortion clinics being terminated.  To illustrate, Women in the World imparted upon pertinent and disheartening statistics: “In 2011, Texas cut family planning funding in the state by 66 percent in an effort to defund Planned Parenthood — a decision that led to the closing of 25 percent of the state’s family planning clinics.  In June, Abbott signed a bill that effectively banned all second-trimester abortions and allowed the state to prosecute anyone who helped a woman obtain a second-trimester abortion — whether they were the doctor performing the procedure, or just a friend driving an abortion-seeker to a clinic.

‘Medicaid in Texas is already banned from covering abortions, and of the estimated 60,000 people who undergo abortions in Texas each year only five percent use insurance to pay for it, according to Daniel Grossman, an abortion provider and researcher with the Texas Policy Evaluation Project.'”

The ripple effect of the crusade against reproductive rights from the Republican party is being devoured by an augmentation to maternal mortality rates, which, “—had been seeing modest increases in Texas between 2000 and 2010, researchers said that the increase in deaths between 2010 and 2012 due to complications of pregnancy and childbirth — from 72 to 148 — was ‘puzzling.'”

State Rep. Chris Turner, D-Grand Prairie, encapsulated the crux of the rebuttal against the reprehensible and impetuous legislation:

“Women don’t plan to be raped. Parents don’t plan for their children to be victims of incest[.]  Asking a woman or a parent to foresee something like that and buy supplemental insurance to cover that horrific possibility is not only ridiculous, it is cruel.”

Non-profit organizations comprised of NARAL Pro-Choice Texas are unwavering within their campaign to “defend reproductive freedom” locally and statewide.  To contribute and endorse these integral liberties, visit here and toil against the sociopolitical ideology of “rape insurance.”

Havin’ A Chai Tea Party In A Jack Daniels World

What Are You Again?