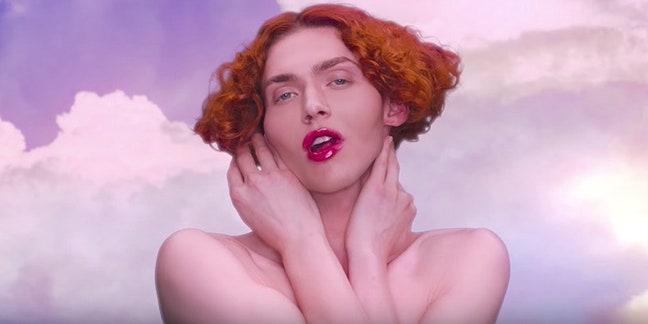 There are very few female producers in the music industry and even fewer transgender producers. However, despite their small numbers, the transgender women of music production are a fierce, impactful bunch. Four, in particular, have been making waves in alternative pop recently. Let’s take a look at these four women and at the forces that have led them to where they are today.

Growing up in Webster Groves, a suburb of St. Louis, Laura Les’s career in music started when she began playing guitar as a teenager. In college, she released many songs on Soundcloud under the artist name “osno1.” Some of these releases gained moderate popularity on the platform. She is now 25 years old and is one-half of the experimental hyper pop duo “100 Gecs” along with music producer Dylan Brady.

While 100 Gecs did spend a lot of time creating music for a very small yet appreciative audience, their lucky break began in 2019. Their sound caught the attention of popular band Brockhampton, who recruited 100 Gecs to open for them for the majority of their North American tour. For the remainder of the year and well into 2020, the band enjoyed increasing popularity and subsequent critical attention. Their first album, “1000 Gecs,” has been hailed as genius as well as denounced as the downfall of music. Since the rise of 100 Gecs, Les has also participated in solo projects, including a collaboration with producer Umru resulting in the song “popular”. She is well-loved by the alternative pop music community.

Scottish producer SOPHIE got into music at a very young age, when she would listen to her father’s cassette tapes and spend all her time tinkering around with a keyboard that was gifted to her. This love of music led her to DJ weddings and events even as she was still a child. In 2016, she worked alongside hyper pop royalty Charli XCX which earned her some fame in the alternative pop scene. Since then, she has worked for big names such as Madonna and Vince Staples, while also releasing her own singles. But the true trademark of her career is her Grammy-nominated 2018 studio album “Oil of Every Pearl’s Un-Insides.” Having been highly reviewed and acclaimed by major music critics and publications, this album is a marvel of modern music. SOPHIE’s work is distinctive in its daring, corrosive sound and bubblegum-and-chrome pop aesthetic.

While now primarily known by her stage name Arca, the Venezuelan music producer’s real name is Alejandra Ghersi. Piano lessons at age 9 piqued her interest in music, and this interest evolved into a passion, as she established a modest local following under the moniker “Nuuro” in Venezuela. Her success became international as she worked with Kanye West to produce five songs off of “Yeezus” as well as with Björk on multiple albums. However, aside from her collaborative work, Arca has also released four studio albums out of Barcelona, which she considers her home base. Similar to SOPHIE, Arca’s sonic presence is very eccentric, pulling elements from pop and electronic music to create a synthetic, glitchy vibe in the best way. Her recent album, “KiCk i,” has been well received and praised for its avant-garde pop sound.

Unlike the other three artists listed here, there is little known about Las Vegas producer Ayesha Erotica as she has had very limited commercial success. However, this is not due to lack of talent or visibility, but rather an excess of the latter. In fall 2018, Ayesha was doxxed, meaning hackers leaked personal information about her to the Internet. As a result, she removed her music from all streaming platforms and deleted her social media presence as well. Her 2015 EP “Big Juicy” can only be found in the form of mediocre-quality fan uploads on Soundcloud and Youtube. Despite her intentional fall into oblivion, Ayesha continues to produce for hyper pop artists such as Slayyyter and That Kid under the alias Ms. Cheeseburger. She has a very strong, dedicated fanbase who continue to support her work and hope for her return.

These four artists have two things in common: they are all transgender women, and they are all producers in the hyper pop genre. As the world becomes increasingly accepting of LGBT+ individuals, there are more and more transgender people in the spotlight. But there is notably a high proportion of transgender people, especially trans women, in the alternative pop/hyper pop scene. There are many reasons for this phenomenon, all of which point to the transgressive quality of hyper pop, as well as music production’s function as a unique avenue for expression.

One of the characteristics of hyper pop that make the genre identifiable and cohesive is the prominent use of autotune and vocal warping. Many artists pitch their voices lower or higher to create a synthetic feel and add to the bubblegum pop-ness of the sound. But there is a second function of this vocal pitching: it also allows for transgender women who may have dysphoria about their voices to curb this discomfort. For example, Laura Les stated in an interview with them, “It’s the only way that I can record, I can’t listen to my regular voice, usually” when asked about her use of voice-pitching.

While Les’s use of autotune is more significant than SOPHIE, Arca, and Ayesha Erotica, all four artists pitch their voices to some degree in many parts of their discographies. There are very few – if any – other genres that maintain the use of autotune as adding to the art, rather than as a cheap way to disguise poor singing.

Furthermore, hyper pop, as a genre, often contains very sexual lyrical content. While many other types of music do not encourage hypersexuality, it is a trademark of hyper pop to discuss sex and sexuality in songs. This aspect of hyper pop caters directly to the LGBT+ community, whose identities are rooted in sexuality and gender non-normativity. Therefore, when Ayesha Erotica sings “Shout the f*** out to the girls with the big a** d***s, stay up” in her song “Yummy,” it is interpreted as an empowering nod to transgender women, whereas other genres may interpret it as a cheap grab for shock value. Unlike any other genre, hyper pop facilitates hypersexuality, which is essential to the recognition and celebration of the LGBT+ community.

Yet it is not just hyper pop, but also music production that allows trans women to thrive especially well. In comparison to those performers who sing or dance, music producers can maintain anonymity during their careers. SOPHIE did not show her face to the industry at all until the debut of her music video for “It’s Okay To Cry.” In this way, she was able to exert complete control over the terms of her coming out. Similarly, Ayesha Erotica is able to continue producing for other artists even after hackers released her deadname and address to the world. She can remain safe and secure, no longer threatened by transphobic doxxing, while still able to do what she loves.

Transgender producers such as Laura Les, SOPHIE, Arca, and Ayesha Erotica contribute wonderful work to the world of music. But their contributions might not have ever been possible had it not been for the accepting world of hyper pop as well as the anonymity provided by music production. Unfortunately, music producers are often not credited nearly enough for the work that they do in the industry because of such anonymity. Therefore, it is important to recognize the mechanisms in place that allow visibility for some artists while preventing it from others. In this world, all consumption of art must be done consciously – it is worth reflecting upon the privilege, or lack thereof, of artists we support.

Read also:
TERFs, SWERFs, And Transphobia: Oh My!
Trans Discrimination In Healthcare Can Kill
Don’t Freak Out But Your Favs Are Problematic

8 Organizations Fighting Against Sexual Abuse In The Arab World