The double standards that we suffer as women are very twisted, but when it comes to our sexuality, they’re just pure ridiculous.

All of us, before we get blessed by feminism, have called other women a thousand different names just for doing as they please. In all honesty, now I realize “bitch” is straight out a synonym for “free woman.” But there was a time when I didn’t know this, and I called other women this because it was the worst thing I could call them, and I cried when they told me because it was the worst thing someone could call me. And I criticized women for wearing that revealing top, or for flirting with too many guys. I saw women on the media always wearing lingerie and sexy clothes, but when it was one of my friends who chose to do so, I was taught it was wrong.

We are harassed for being sexual, while at the same time, we are pushed to be sexual. This explains so many things, like the fact women can’t breastfeed in public (“tits are just for men’s entertainment, you can’t show them on the streets, THERE ARE CHILDREN WALKING AROUND!”), or rape culture in general (“okay, but what were you wearing?”).

It’s Carnival right now in Spain, and this is the time where double standards are more obvious, more easily seen on the streets. This time, a costume for girls aged 4 to 6 named “sexy nurse” has opened a debate. Feminists are outraged. 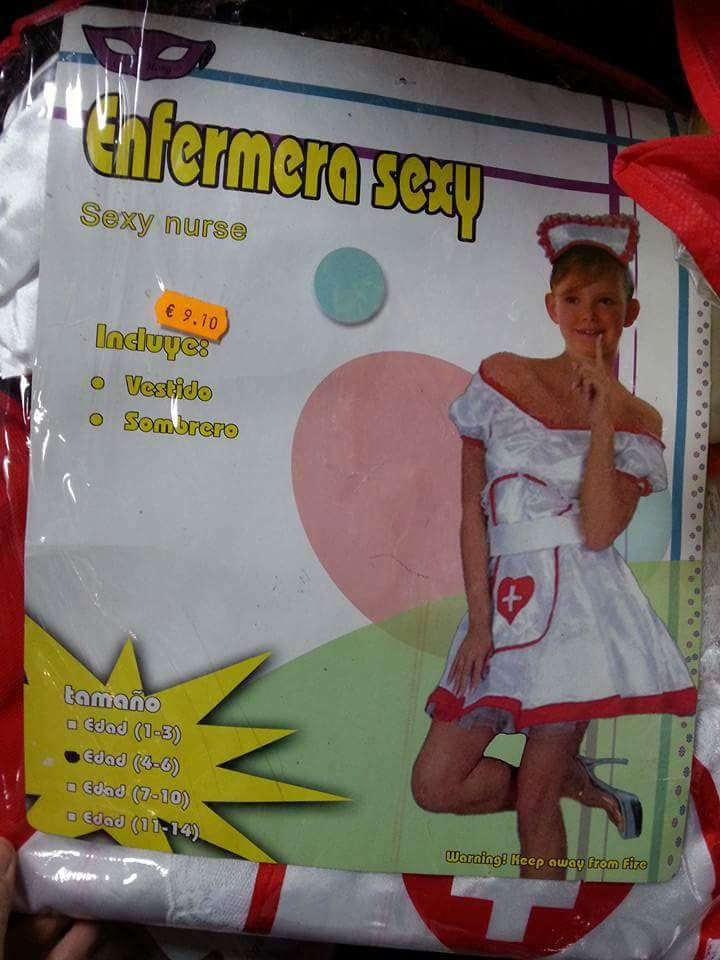 Can you even categorize a four-year-old as sexy? Isn’t this pedophilia at its finest? Obviously it starts when we are 4, but it never stops. A quick Google Search switching “men” for “women” gives us very graphic examples.

See a pattern here? It’s an easy task. WE. ARE. SEXUALIZED. No matter what profession we want to dress up this Carnival, or next Halloween, we have to wear a short skirt, a revealing neckline. But things can get way worse.

IS IT POSSIBLE TO SEXUALIZE A FREAKING CORN??? YES. IT. IS. POSSIBLE.

Dear society: if I must wear a sexy corn costume, you must allow me to speak about my sexuality openly. I refuse to live in a world where we are seen as sexual objects and, at the same time, are taught to be un-sexual beings. I will choose when and how to be sexual, and you will have to respect me.

Self Care – The Ugly Truth