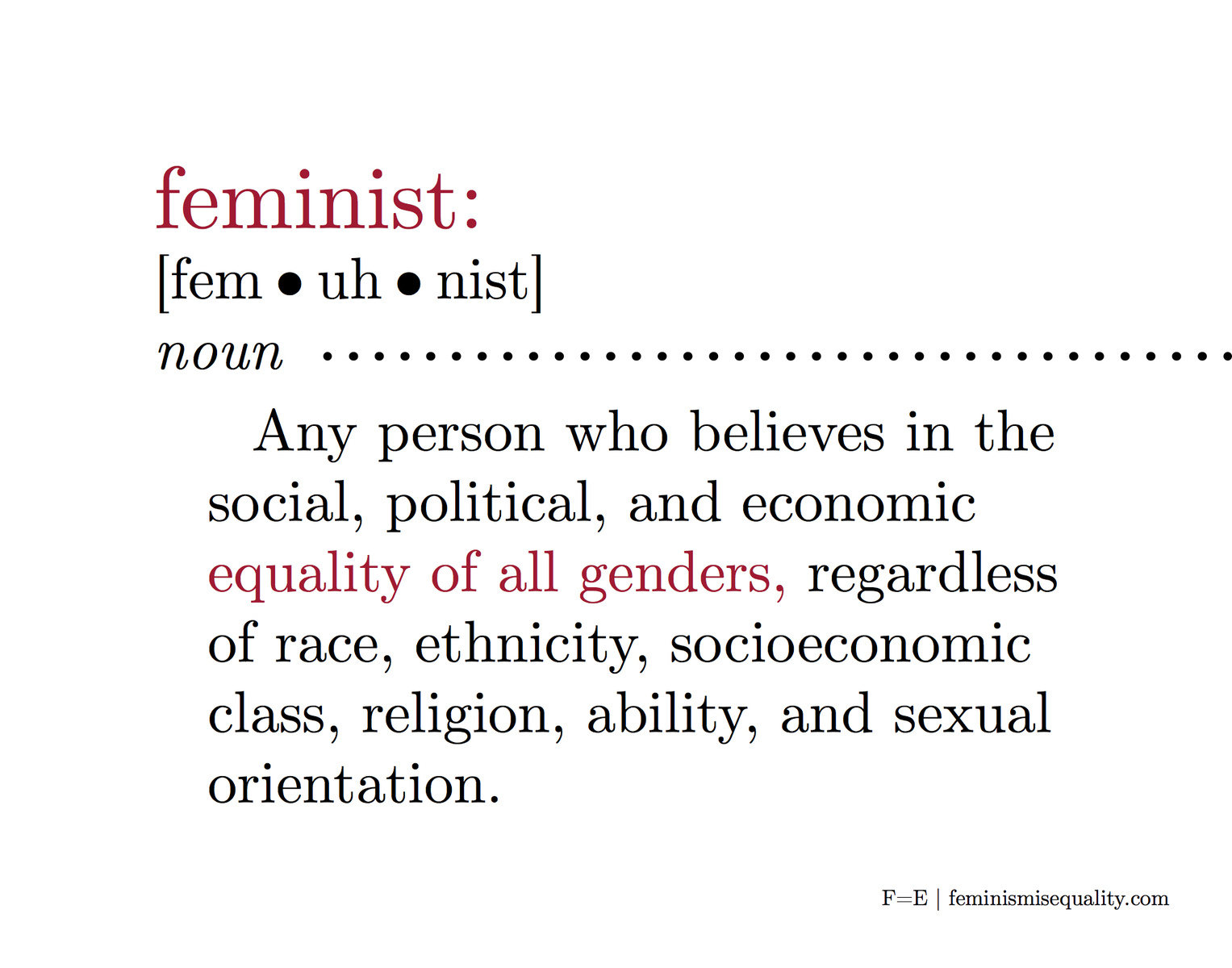 I’m a proud feminist, but every time I tell someone, I brace myself.

I’ve come to expect a negative reaction: I’m either labelled a man-hater or, because I’m white, someone might assume that I’m what’s derisively called a “white feminist” — a person who claims to advocate for equality between the sexes while leaving women of color (as well as transgender women and/or nonbinary folks) out of the equation. People like Tomi Lahren, Lena Dunham, and Ivanka Trump represent that category and serve as examples of what not to do if you call yourself a feminist: their actions have only added fuel to the growing fire of divisiveness swirling around feminist circles today.

The Tab’s Becca Tasker sums up what I — and many like me — see as an integral part of feminism from where we stand:

“As a white woman, I make a conscious effort every single day to make sure that my personal brand of feminism is more than what is colloquially known as ‘white feminism.’ I want to make sure that my voice in the struggle for equality is one that speaks to intersectional ideas, class politics, and acknowledges my own varied privileges.”

While I believe that true feminism should advocate for the equality of all genders of any race, I don’t want to devalue the many other layers of discrimination that WOC and queer women face by explaining them from my perspective. From my place of privilege, that’s not my perspective to give. I’m not here to give anyone a voice — what feminists like me need to do is simply pass the mic until it’s our turn to talk about what we have experienced. Too many of us think the only point of feminism is just to free the nipple, stop shaving, or wear t-shirts emblazoned with the female symbol. Sure, do those things — but while you’re at it, educate yourself on the issues that really matter. (And know that hairy armpits do not an activist make)

Internal division is not the only problem with today’s feminism. Many assume that, when I label myself a feminist, I’m saying that I believe women are superior to men. Unfortunately, this is what many so-called feminists have devolved to think, and that, too, stained our movement in a way that doesn’t reflect the views of the majority. It’s one thing to say “men are trash” or raise awareness about misogyny and sexist behavior from men, but it’s another thing entirely to genuinely believe that women should take men’s places in their unfounded higher statuses and social standings. The most radical voices are often the most vocal, but we can’t let them continue to cause people to take feminism less seriously.

After all, the point of feminism is not to advocate for the superiority of women over men, but to elevate us to their status in society.

If you are truly a feminist, then you should be not only intersectional but also in opposition to the idea of toxic masculinity just as much as you are to the idea that women must be delicate and submissive. You should want to destroy society’s expectation that men must be tall and have six-packs to be worth something just as much as you want to dismantle the idea that women must be skinny, big-breasted, and light-skinned to deserve respect and acceptance. Your blood should boil when people argue that men can’t get raped or assert that they shouldn’t complain about sexual assault or domestic abuse just as much as it does when someone asks a female rape victim what she was wearing or how much she had to drink when someone took advantage of her. You should know that society — men and women alike — expect men to be emotionless and “strong,” leading them to internalize their emotions and compromise their mental health to the point where men are two to four times more likely to commit suicide than women.

Asserting that these problems only apply to females makes us just as bad as the male sexists we oppose. However, that does not mean that we shouldn’t have programs and ideas that cater specifically to women, and it doesn’t mean we need to pretend as though men’s issues are as prevalent as women’s. That’s not sexist — it’s part of feminism’s goal to raise females to the same level as males. For example:

We need movements to bring more women into our government, such as She Should Run and the Women’s Campaign Fund because women make up only 20 percent of the Senate, 19.3 percent of the House, and 19 percent of mayoral positions. While there are currently only four women serving as a governor, just one is a woman of color. Only 7.1 percent of the total members of Congress are women of color.

We need campaigns for education that target women and girls specifically, like the American Association of University Women (AAUW) in the U.S. and Educate Girls in India. Girl Up and Girl Rising are other examples of global programs seeking to help reduce the number of girls worldwide who aren’t receiving an education — currently 62 million. We need these organizations and others like them because, on average, girls are 1.5 times more likely to be kept out of school than boys.

We need more programs like the AAUW, Girls Who Code and the Center for STEM Education for Girls to engage females in STEM (Science, Technology, Engineering, and Math), because we still experience significant stigma and discrimination in these fields.

We need to support female survivors of domestic violence because more than 80 percent of victims of domestic violence are women. We need to protect female survivors of rape and work to make college campuses safer because 1 out of 6 American women have survived an attempted or completed rape, and nearly 1 in 4 girls will report it during college. We need Planned Parenthood to fight for the health and reproductive rights of anyone with a uterus. We need women and girls to be represented in music, art, literature, sports, and every aspect of life in which men traditionally dominate.

What we don’t need are female-centric movements that perpetuate the falsehood that women are the only ones affected by rape or beauty standards — or anything along those lines — as many of the injustices I have mentioned can affect anyone of any gender, race, age, sexual orientation, or socioeconomic background. We need to focus on positive social change, starting with women because these things disproportionately affect us and have throughout history.

We need the organizations above and more like them to promote equality and parity, not to reverse today’s gender roles as some sort of ‘payback.’ If sexism is wrong in an advanced society, it is wrong both ways. In short, a self-proclaimed ‘feminist’ who believes that women are better than men is not a feminist — they’re a sexist.

It’s time we step up and continue the fight for real equality rather than putting down men in a misguided attempt to dominate at the top of the social ladder.

Eyeshadow Palettes: Is It Worth It?