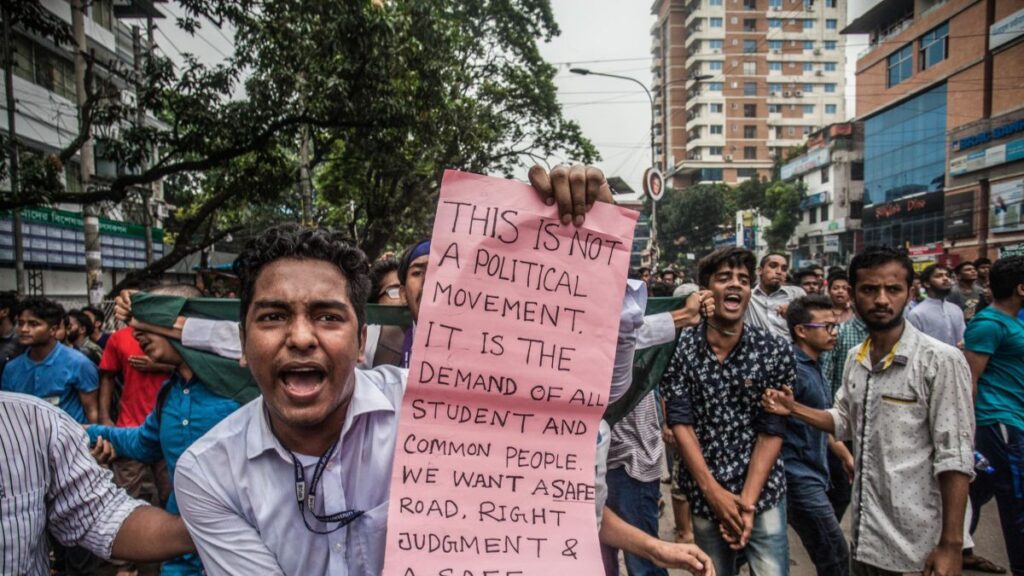 On July 29th, two students were killed by a speeding bus in Dhaka, Bangladesh. A little earlier the same week, another student was run over by a speeding bus. The bus driver stepped out, and instead of taking the severely injured pedestrian straight to the hospital, the driver smashed the young boy’s head with a brick and carelessly tossed him over a bridge. As a result, anger erupted over the capital city’s poor infrastructure and fear over dangerous conditions sparked protests that would go down in history.

Last year around 4,200 pedestrians died as a result of poor road conditions in Bangladesh.  High school and college students took to the streets to show their outrage by blocking roads, intersections, and checkpoints. They’ve made history by efficiently clearing congestion and enacting better road manners in Dhaka. Students were also stopping vehicles without proper and legal reason to drive, controlling traffic patterns in the heat, and ensuring anybody who was operating a vehicle had a valid license to drive it. They even managed to create a special lane for emergency vehicles to pass through.

Unfortunately, after just four days the protests became deadly. The government began to attack these peaceful demonstrators using tear gas and fear in an attempt to disperse the protesters. Adults were chasing students with knives, beating them with bats, and molesting young girls. The violence towards women, in particular, became so atrocious that the male students had to form a human shield around female students in hopes of protecting them from the perpetrators.

Reports began to surface that the authorities had also shut down the internet to make sure news didn’t get out. Additionally, at the time these incidents were not being properly recognized by the media; only a handful of publications in Bangladesh was posting updates on the condition of the student protestors. Shahidul Alam, a human rights activist, and notable journalist was arrested shortly after his interview to Al Jazeera. According to him, road safety isn’t the only thing driving these students to speak out. Bank robberies, law enforcement corruption, excess control of the media, and extrajudicial executions are just some of the factors pushing students to take the streets.

On August 16th, more than 100 students were injured by the police and later arrested. The United Nations has also expressed unease as the protests and backlash continue to escalate. Bangladesh’s’ government has tried to mitigate the growing public concern by stating that it’s nothing more than a few teenagers with idle time and has even urged protestors to return home. Prime Minister Sheikh Hasina has stated that she believes the protests are a political strategy that is being manipulated in a way to undermine the general election this coming December. The opposing party has yet to comment.