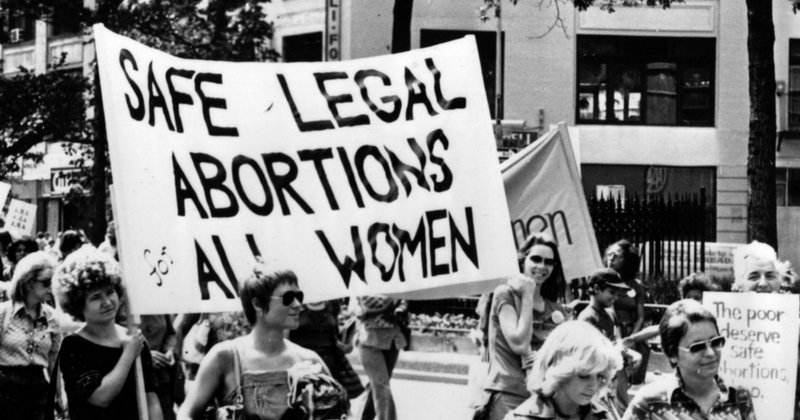 On May 14th, the Alabama state-legislature passed a measure, House Bill 314, that would ban abortion in all circumstances — with the only exception being when the abortion is necessary to prevent a serious health risk to the woman. It criminalizes the procedure by reclassifying abortion as a Class A penalty, punishable by up to 99 years in prison for doctors.

This legislation makes no exemptions for minors, victims of rape, or incest. It also means that women seeking abortions will be more heavily punished in this country than rapists. A 99-year sentence for those complicit in abortion, yet only a 10-year sentence (even less in the case of rich, privileged white men like Brock Turner) for those found guilty of rape.

Kay Ivey, the state’s Republican governor, signed the bill this week. In a statement, she wrote, “This legislation stands as a powerful testament to Alabamians’ deeply held belief that every life is precious and that every life is a sacred gift from God.”

So much for separation of church and state.

Alabama is now the state with the most restrictive abortion law since Roe v. Wade. The bill’s sponsor, State Representative Terri Collins, a Republican, admitted that the point of the bill is to directly attack past Supreme Court precedent. He anticipates the bill will be contested by abortion rights activist organizations, like the ACLU, making it very likely that the bill finds its way to the high court.

The reason why this result is so predictable is that the bill is clearly unconstitutional. Unlike past anti-abortion measures such as the “fetal heartbeat” bill, this measure makes almost no exemptions and most definitely violates a constitutionally protected right to abortion that was established under Roe v. Wade. But Alabama’s Republican state representatives know that already. Alabama hopes that someone will challenge their unconstitutional abortion ban because it is evidently unconstitutional. By challenging it, there is a high probability that this measure will be appealed and brought up to the Supreme Court.

While this may not have been concerning in the past, Trump’s second nomination for the Supreme Court, Justice Brett Kavanaugh, places the future of Roe v. Wade at stake. Kavanaugh is a former aide to President George W. Bush and a former clerk for Justice Kennedy, and his nomination was confirmed by a Republican-controlled Senate. Kennedy was historically the swing vote when it came to abortion matters, so his retirement means that the court now faces a 5-4 conservative majority.

After Kavanaugh’s confirmation, experts on Constitutional Law began to predict the implications that a conservative majority could have on past Supreme Court precedent. Professor Elizabeth Joh, Professor of Law at U.C. Davis, predicted the process by which Roe v. Wade would be overturned. She said that there would most likely be a law passed to get rid of all abortions in one particular state, and some organization would bring a lawsuit forward asking a judge to find that measure unconstitutional. The state with the restrictive abortion law, in this case being Alabama, would ask the Supreme Court to decide that Roe v. Wade was a mistake, overturning precedent and deciding that there is no constitutionally protected right to an abortion.

The current five-member conservative majority means that two things could happen to Roe v. Wade. The first is that the Supreme Court could uphold many kinds of restrictions on abortion such as waiting periods, requirements for counseling, or requiring that abortion providers be doctors. Several states passed laws that severely limit the right to abortion, such as the fetal heartbeat bill — a measure passed by Georgia that makes abortion illegal once a fetal heartbeat has been detected. This can be as early as up to six weeks into a person’s pregnancy.

In the past, the Supreme Court has found these laws to be unconstitutional and in violation of federal precedent. However, the current conservative majority means that once these bills are appealed to the Supreme Court, they will likely be upheld.

The second and more dramatic outcome is that Roe v. Wade could be overturned entirely with a simple majority decision. What does this mean for the future of reproductive justice? There would no longer be a constitutionally protected right to an abortion. This would not necessarily mark the end of all legal abortions, but it would rather be up to each state to decide whether they want to allow legal abortions or ban them altogether. In states with conservative legislatures such as Alabama and Georgia, the most likely scenario would be the latter.

The fate of the constitutionality of abortion is not simply a question of individual rights, but also one of access for the poor. In a world where Roe v. Wade was to be overturned, if you live in a state where abortion is illegal but you have the financial means to travel to another state, you could still obtain a legal abortion. The same cannot be said for low-income people.

This also isn’t a question of not having enough women in office. The legislator who drafted the bill is a white woman and the governor of Alabama who signed it into law is also a white woman. 53% of white women voted for Donald Trump in the 2016 presidential election. Rather than focusing on the increased representation of women in politics (which always turns out to be overwhelmingly white), we should focus on racial and classist disparities that limit the potential for truly achieving reproductive justice.

One thing is clear: criminalizing abortion will not end abortion practices, it will only end access to safe abortion by putting the lives of pregnant people at risk. If conservative lawmakers were truly pro-life, they would be working towards reforming a broken foster care system or abolishing ICE, an agency that is ripping children out of their mother’s arms.

Conservative lawmakers are not pro-life. They are pro-control.