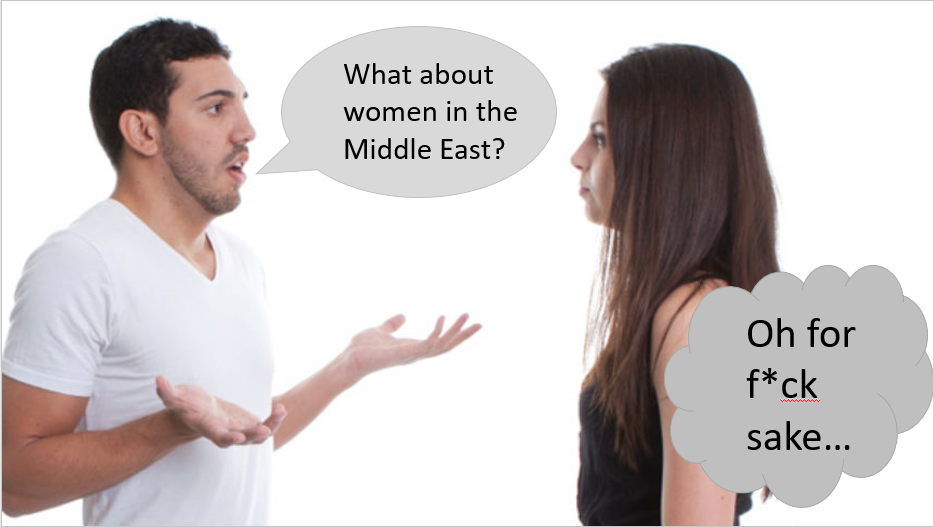 “What about women in the Middle East?”
If I had a penny for every time a guy said that to me…

The field of Western anthropology largely began with a focus on the ‘other.’ With colonialism and imperialism driving the intentions of western white men, they set their sights on ‘primitive’ societies to study and inflate the European ego. They even brought some ‘uncivilised’ subjects home as exhibitions in human zoos. Ultimately, it was felt that the duty of white men was to be responsible for their colonial possessions. This came to be known colloquially as white man’s burden.

That chapter in the history books has thankfully closed, but the repercussions undoubtedly persist today. Even the attitude rears its ugly head; constructing an ‘other’ out of an outsider, stereotyping and using them as a scapegoat. Such is the case with Muslim women. Approach a western guy, bring up women’s rights and 9/10 it’ll swing back round to: “What about women in the Middle East?” or similarly, “What about Muslim women?”

This isn’t so much genuine concern as derailing the conversation. Worryingly, many go on to develop their point, claiming us feminists aren’t doing enough for women in the Middle East. This used to make me feel uncomfortable because I knew somewhere, the reasoning in that assertion was flawed, but I couldn’t place it. I had no rebuttal.

After all, women do face injustices in the Middle East and there’s no mistaking it as a women’s utopia. But as a young western woman, with little knowledge of their culture and little means to do anything… I felt powerless. Then I steadily came to realise that that very argument, us feminists not doing enough for women thousands of miles away, made Muslim women appear powerless too. It completely stripped away their agency, treated them as victims to be saved and demeaned them. Worse yet, it painted me as a hero, a potential hero and a failed hero. Why?

Because I’m white-western and therefore it’s my duty to go and ‘save’ Middle Eastern women. Of course, I am a woman though, so I haven’t figured that out yet but luckily white guys have it sussed. “Onwards, fellow missionaries!” – feels very crusades-y. This is known as the ‘white saviour complex.’ When applied to feminists and our supposed duty for Muslim women: white women’s burden. Unsurprisingly, some strains of white feminism have eagerly taken up the ’cause,’ a prime example being Femen, a Ukrainian radical feminist activist group founded in 2008.

But this is not our cause nor our burden. Muslim women don’t need us to save them and to suggest they do gently reinforce white supremacy, euro-centrism, and even Islamophobia. Because if we swoop in and supposedly liberate women from their ‘Islamic oppressors,’ where are they supposed to go and what shall we do with them? Assimilate them into white-western society? As soon as you follow this logic through, it’s clear there are some worrying assumptions behind it.

Truth is, Muslim women are more than capable of affecting change, raising their voices and taking charge of their own liberation. Does this mean western feminists should have nothing to do it and otherwise shut our ears to the happenings in other parts of the world? No. But the struggle of Middle Eastern women is not OUR struggle. We can and should offer support and solidarity, asking, “how can we help?” rather than, “I know what’s best for you.” Again, the latter is a patronising and overly toxic-male assumption that no woman needs in her life.

Certainly, this shouldn’t come as a revelation and even a quick Google search can put the troubled white male at ease. For example, Muslim women scholars are questioning the gender-biased interpretations of the Qur’an, the Prophet’s traditions and the early history of Islam, with writers such as Fatima Mernissi, Laila Ahmad, Azizah al-Hibri and many more. Similarly, Musawah (meaning ‘equality’ in Arabic) was set up in 2009 to promote equality in the Muslim family and is women-led. And of course, there is much debate going on in Iran concerning personal freedoms, as women remove their headscarves in acts of protest against a law that makes wearing them compulsory.

And that’s just the tip-of-the-iceberg answer to: “what about women in the Middle East?”

I Used A Dating App To Figure Out My Sexuality