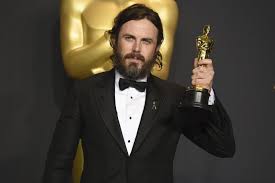 On February 26th, 2017, the 89th Academy Awards aired. I always enjoy watching the Oscars, it’s fun to live tweet and talk about the winners with my friends. I was having a great time until the winner for Best Actor was announced. It was Casey Affleck.

I was appalled at the fact the Academy had let this man win. I was even more disgusted at the fact that there were people still supporting him. If you are unfamiliar with what Casey Affleck has done, here’s the deal.

In 2010, producer Amanda White and cinematographer Magdalena Gorka, both of whom worked with Affleck in the 2010 mockumentary film I’m Still Here, filed sexual harassment suits against the actor.

White herself claimed that Affleck repeatedly called women “cows” while on set, discussed his sexual encounters, and even ordered a crew member to show her his penis after she objected. On top of that, White has stated that Affleck has physically threatened her multiple times. She even said that after denying his request to stay in a hotel room with him that night, he grabbed her in “a hostile manner” to get her to submit to his demands. Her complaint can be read in full here.

The other woman involved in the suits, Magdalena Gorka, described her time working with Affleck as “the most traumatizing of her career.” In December 2008, she traveled to New York to shoot scenes with Affleck’s ex-brother-in-law, actor Joaquin Phoenix. Affleck and Phoenix decided not to put the crew up in a hotel and instead, the crew stayed at Phoenix and Affleck’s apartment. After a night of shooting, Phoenix told Gorka to sleep in his bedroom, whereas he would sleep on the couch. Gorka had believed the bedroom would be private, so she slept in a camisole and pajama pants. Unbeknownst to Gorka, Affleck had crawled into the same bed as her while she was sleeping and curled up next to her, wearing only a t-shirt and underwear. An appalled Gorka awoke with Affleck’s arm around her, caressing her back. His face was merely inches away from hers and his breath reeked of alcohol. She woke up, feeling repulsed at the fact that she had no idea where Affleck could have touched her. She then jumped up, and told Affleck to get out of the bed. He responded by asking “why?” Gorka said, “because you are married and because you are my boss.” Affleck responded by slamming the door angrily as he left. Her complaint can be read in full here.

Both of those instances make me ask to myself, “why are people still supporting this man?” Sadly, supporting celebrities who have displayed abusive behavior is still relevant in today’s day and age. Chris Brown still has a loyal fan-base even after what he did to Rihanna, and more recently Karrueche Tran. Johnny Depp still has supporters even after allegations of abuse against Amber Heard came to light. Oh, and not to mention, Donald Trump is currently President of the United States. Need I say more?

Supporting these individuals means you are normalizing their actions, and it’s not okay. You are helping abusers thrive, instead of condemning them for what they’ve done. Imagine being a victim of abuse and seeing the very person who abused you idolized by many, it’s sickening. You may be thinking “well just because I like them doesn’t mean I agree with or support their actions!”, but it does. You are inadvertently supporting abusive individuals just because you “like their music” or you “like their movies”. I mean, who cares that they are abusive as long as they create content that you enjoy, right? Wrong. We as a society need to be better at holding celebrities accountable for their actions. We need to stand by victims of abuse and let them know that they are not alone, that we are here for them. Don’t let being a “loyal fan” of someone get in the way of your morality.