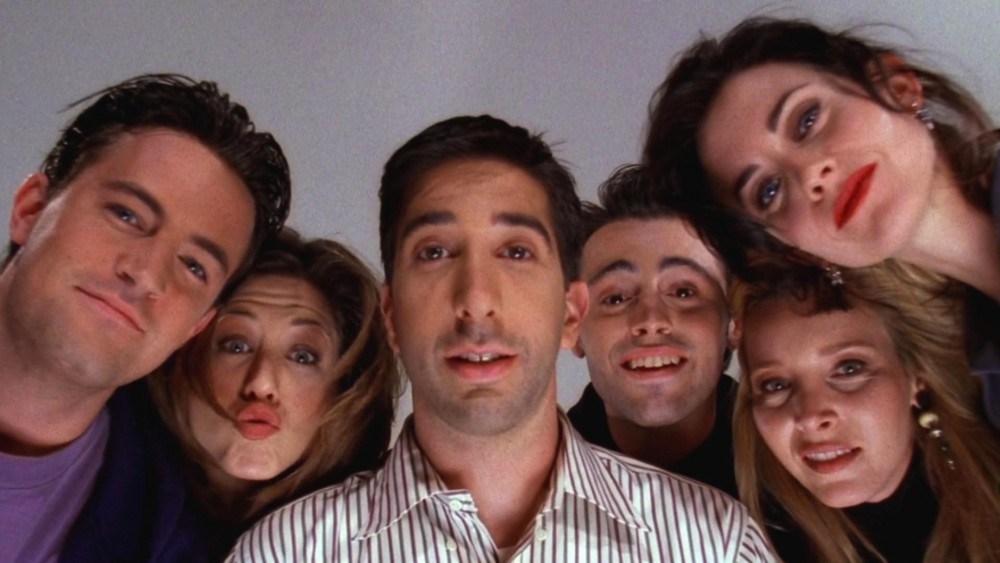 Since Friends made its way onto Netflix (finally!) there have been numerous think pieces about the outrage surrounding certain storylines.  Now, I love Friends.  ‘Got the keeeeEEEEYS?’ was screamed almost every time I and my real-life friends left the house we shared for two years.  Every now and then, I’ll message my bestie just saying ‘Potatoes are ruined, potatoes are ruined, potatoes ruined’ and we both giggle.  As a young teenager, when Friends was only available on T4 on a Sunday and seemed to be shown in no real order, I borrowed the DVD’s from a mate every summer (or maybe it was videos back then?), starting at the beginning and watching till the end of the latest season.  I still cry at multiple episodes (the prom video, when Ross begs Rachel not to leave him, Chandler and Monica’s engagement, Phoebe’s wedding and, of course, Rachel’s goodbyes).  Friends formed a large part of my learning about friendships, relationships and, most importantly, comedy.  One of the reasons I think it has aged well is that the jokes weren’t solely reliant on pop culture references, many of which I didn’t get at the time anyway as they were American based, but also on the casts comedic chops and perfect timing.  But not all of it has dated well.

There are plenty of criticisms thrown at Friends now that many people are either watching or rewatching it for the first time and, frankly, most of them are true.  As much as I love the show I’m not going to attempt to defend that fact that many of its jokes rely on the men’s homophobia, the fact that the cast was embarrassingly white right up until the end and I won’t even start on the hot mess that was the way they treated Chandler’s dad, the trans character who was never referred to as trans.  Like many, I recognised these problems after becoming more aware of the world around me and the myriad of different identities and experiences that the show either ignored or mocked.  No show can be perfect and, by 2018 standards, Friends definitely missed the mark.  And where did many of those problems come from?  Well, there is one character who must bear the brunt of the critique.

Ross Gellar.  One half of the shows central on-again-off-again relationship that played out over all ten seasons, from Ross almost asking Rachel out in the first episode to the ‘I got off the plane’ line in the final episode, their relationship weaves through the lives of the Friends and very much holds them (and the show) together.  However, Ross is literally the worst.  Before we even really had a widespread concept of toxic masculinity, Ross was portraying it to the world.

Ross is jealous.  When his relationship with Rachel breaks down for the second time he tries to claim it took both of them to ruin the relationship but really all it took was Ross and his jealousy.  He is jealous not just of a man who Rachel shows absolutely zero interest in but of the fact she has a job and becomes a success without his help.  She is longer just the slightly younger, airheaded, drifting creature he knew and he can’t handle that because he is insecure.  He is not only the man but he is the smart one, the successful one, the grown-up one (by his own standards at least).  They don’t break up because he is jealous of Mark, they break up because he is jealous of her.  I mean, he complains that she has to work a lot when he took her into his work on their very first date?  Talk about a double standard!

Ross is homophobic.  Any hint at a bit of man on man action and he freaks out.  This is also true of Chandler, who grew up in a painfully broken home he blamed on his dad leaving to be with the houseboy.  Ross, who prides himself on being a good friend, won’t kiss his best mate to help him practice for an audition.  Ross, who is a bit of a coward, throws himself off a building rather than risk seeing Joeys bare crotch.  This isn’t a problem with just Ross, many men are like this, which is why it played so well at the time, but that doesn’t make it right.

Ross is terrified of feminine men.  This comes to a head in ‘The One With The Male Nanny’ when he insists they fire a fantastically qualified and super talented nanny because he is a man and that makes Ross uncomfortable.  In this episode, we are given, for the first time, a reason why Ross is the way he is.  When he was a boy, his father berated him for not being more tough and sporty.  This obviously stuck with Ross, leaving him to believe that the only way to be a real man was to be tough, to be in control, to be smart, to be, in short, all things masculine.

And this is the great paradox for Ross.  Because, despite his best efforts, he is not traditionally masculine.  He takes great care of his appearance, he likes ballet and art, he is emotional and needy.  When Rachel accidentally gives him a bag of her shopping he happily wears a pink silk top out on a date.  He is all of the things he doesn’t think he should be and that manifests as treating other people, mostly Rachel, unfairly.

Ross is the worst because he is a jealous, insecure dick, but he is all of those things because of the prevalence of toxic masculinity in the world.  And back in the 90s when Ross was devised we didn’t have the language to show that this was a bad thing, the show doesn’t poke fun at Ross for being dreadful, or at the forces that created this paradox within him, we just laugh at the consequences of his actions.  I would say we shouldn’t blame him, that this damage is what the world (and bad parenting) can do to people.

But we watched him for ten years and he, the most damaged and damaging of the characters, barely changed.

Rachel went from being innocent, vulnerable and spoiled to being capable, powerful and…OK, still spoiled.  Joey went from an unsuccessful womanizer to a soap star who seeks meaningful relationships.  Pheobe finally got the good life she deserved after the mess of her youth.  Monica got over a lot of her insecurities and mother issues and Chandler finally learned to be vulnerable and deal with his feelings.

Ross…spent ten years being possessive of Rachel, despite only being with her for two of those years and one ill-advised shag that ended in a baby.  Ross was as insecure, needy, jealous, angry and big headed at the end of the ten seasons as he was at the start.  While I can somewhat forgive Ross the damage his parents and toxic masculinity did when he was young (I mean, we’ve all been there) I cannot forgive him never making an effort to change.  We are all capable of change.