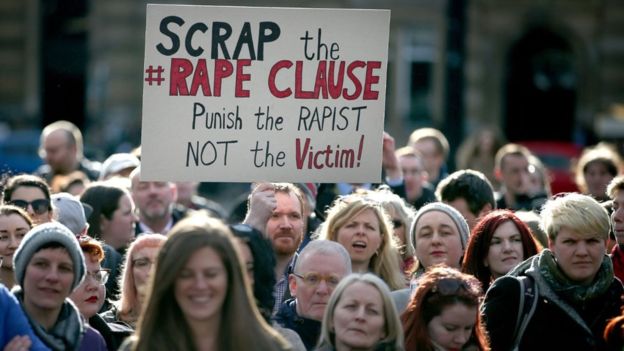 Photograph taken at a recent ‘Scrap The Rape Clause’ rally in Glasgow, Scotland.

Recently the Conservative government in the UK passed a bill known as ‘the rape clause.’ This bill was passed without a parliamentary vote, and therefore has become law. The rape clause is a part of welfare cuts by the Conservative party who have now introduced a two-child policy in regards to receiving tax credit, this means a third child will not be eligible (note that is around £13 a week in benefits). The rape clause means that women who have a third child conceived non-consensually will be excluded from these cuts, in order to do this, they must essentially prove it. It states specifically that a woman can claim for a third child if it was conceived “as a result of a sexual act which you didn’t or couldn’t consent to” or “at a time when you were in an abusive relationship, under ongoing control or coercion by the other parent of the child”; but to apply for this women must relive their trauma while filling out an 8 page document to prove that this is what their circumstances were. This form creates a wealth of issues out with the ordeal that this is sure to be for the woman. Some of these include:

The main reason why I have been alerted to this unjust law is that as a Scot I recently watched Ruth Davidson, the leader of the Scottish Conservatives defend the rape clause as “the most sensitive way” and announce her and her parties full support for it, while also suggesting that those in opposition to it are making it seem worse than it is. A campaign has been launched within the Scottish Parliament by MSP Alison Thewliss called ‘Scrap The Rape Clause.’

Her reasons for starting this campaign being,

“I believe that women having to prove that they had been raped to DWP (Department For Work And Pensions) employees in order to receive social security payments is morally wrong and would cause needless additional trauma, as well as being completely unworkable in practice.” 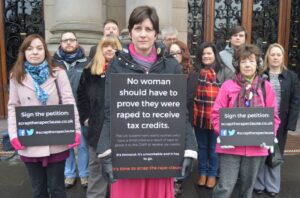 A petition was also started which gained over 10,000 signatures and many women’s aid charities in Scotland and throughout the UK have expressed their opposition and a large group of psychologists signed a joint letter warning that “the way in which this rape clause is to be administered will cause significant psychological harm”. In my opinion, the introduction of the rape clause is just more evidence of society’s attitudes to women in general and that the whole concept of this horrendous law is rife with victim-blaming and patriarchalism. It also expresses even more so the lack of compassion held towards victims of rape and abuse.

10 Songs To Listen To When You Want To Feel Empowered