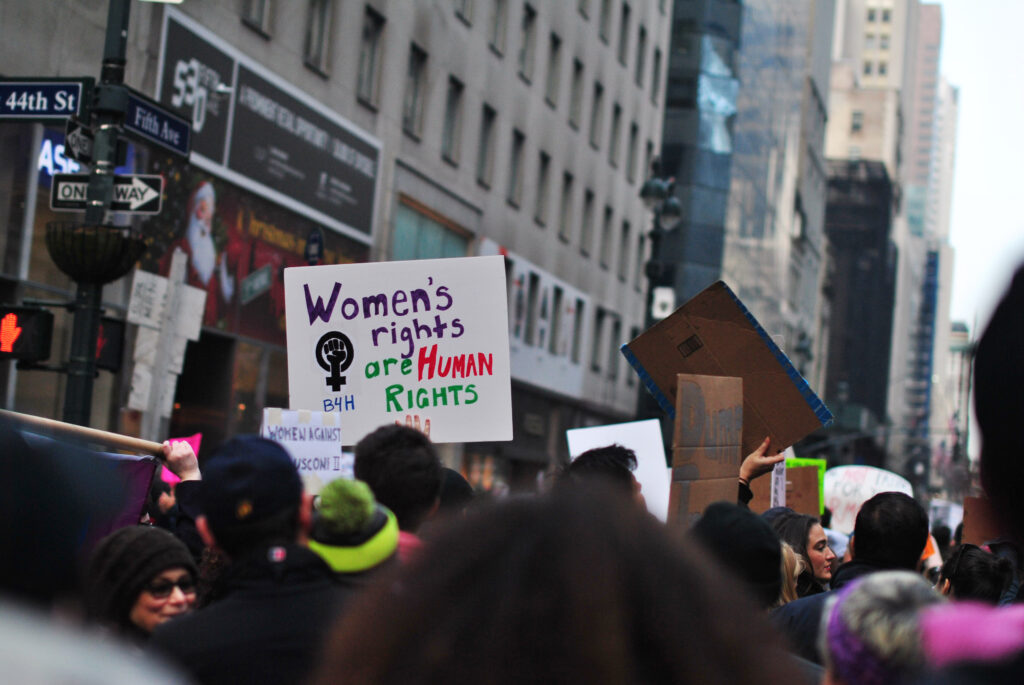 The United Nations Declaration of Human Rights calls for an elimination of discrimination upon the bases of sex. However, for long, the question of whether human rights are gender equal or whether the concept of human rights is gender-biased and/or gender-blind has been the subject of debate in feminist and other women rights movements and theories’ discourse[1]. The universal declaration of human rights was in fact drafted by men at a time when was considered the head and protector of the family. The declaration of human rights protects individuals in a society of which men are the protectorate. All developments in human rights come from acts of violations occurred first, thus the fundamental rights incorporate protection against violations against men, and do not take into account other forms of violations limited to women[2].

One argument is the assumption, as in several cultures, that if men exist as the protectors and providers of women, why must they require separate rights?

While more comprehensive treaties have followed the universal declaration of human rights, they are all based on the same shared flaw: “they are built on typically male life experiences and in their current form do not respond to the most pressing risks women face”[3]. The laws and policies, in an attempt to be gender neutral, show blindness when they fail to cater to the distinctive rights of women being violated.

For example the issue of reservation and CEDAW: Algeria made reservations on article 16 of CEDAW on equal marriage rights, that they should not contradict Algerian family code. Jessica Neuwirth, pointed out that “[i]n effect, Algeria stated its willingness to implement CEDAW so long as nothing needed to be done to implement CEDAW”[4]

Similarly, the case of Savita Halappanavar[5] in the Republic of Ireland that ratified CEDAW in 1985 with no reservations; however when Savita was told by doctors that the fetus would not survive several times, she was still denied an abortion because a foetal heartbeat could be detected. She was denied abortion because of the strong influence of the Irish Catholic Church, as a result, she died. Several protests followed that questioned the commitment of the Irish Government towards actually implementing CEDAW.

The United Nations General Assembly declared , ‘The human rights of women and of the girl-child are an inalienable, integral and indivisible part of universal human rights’[6] and further advocates for the full participation of women in political, civil, social and cultural lives at all levels national and international and for the eradication of all forms of discrimination. However, it is important to note that it took the UNGA to point this out only in 1993, 48 years after its conception, which indicates that the realization of and struggle for women’s rights as human rights is still very, very young. Where rights of man have had centuries of thought, philosophy and renaissance’s revolutionary understanding poured into it, women have only recently been given space in that debate.

Furthermore, there is a fundamental flaw in pursuing women rights through the same philosophy and philosophers who never perceived women to be on the same level of reasoning ability as men. The structure that most human rights organizations working to create a better world for women today are based on ideals and declarations drafted by men who saw the world from the perspective of their gender only. And while progress has been made, vast differences exist in conditions of women rights globally because of socio-economic and cultural gaps.

Efforts trying to make space for women rights debates in societies that depend on arguments like the economic benefits of allowing greater women in the labor force will only make progress on a surface level. The problem with this argument is that it fails to challenge the perceptions of nearly half the population of the world towards the other half: it leaves the question, of why men or even women would not want for women the same place and opportunities in society that men hold, unanswered. Approaching any human rights concern at the surface level leaves behind room for discord, and perhaps that can explain the immense backlash the feminist movement faces despite the progress it has made. The backlash is serious and the pent up anger and resentment and frustration towards an entire gender that is not being addressed.

There is most certainly progress in the field of women’s rights as human rights and the result of this progress has created a world that rapidly wants to measure more of this. However, whether it is going in the right direction is a question that must be asked repeatedly. Because the struggle for women’s rights began with demands for more political and civil rights, the debate around the social foundations of women rights as human rights has long been lacking a systemic approach that is afforded to the universal human rights discourse and its direction.

[4] Neuwirth, Jessica (2005), “Inequality Before the Law: Holding States Accountable for Sex Discriminatory Laws Under the Convention on the Elimination of All Forms of Discrimination Against Women and Through the Beijing Platform for Action”, Harvard Human Rights Journal, 18, pp. 19-54

Tweet
feminismWomensRights
Previous ArticleWomen: Destroying Stereotypes In TelevisionNext ArticleBreakfast: Worth The Time Or Not?

The Type of Sexual Assault We Don’t Talk About: Coercion 18232

5 Reasons Why You SHOULD Date Indian Girls 14733

Colorism And Anti-Blackness In The Asian Community 10964