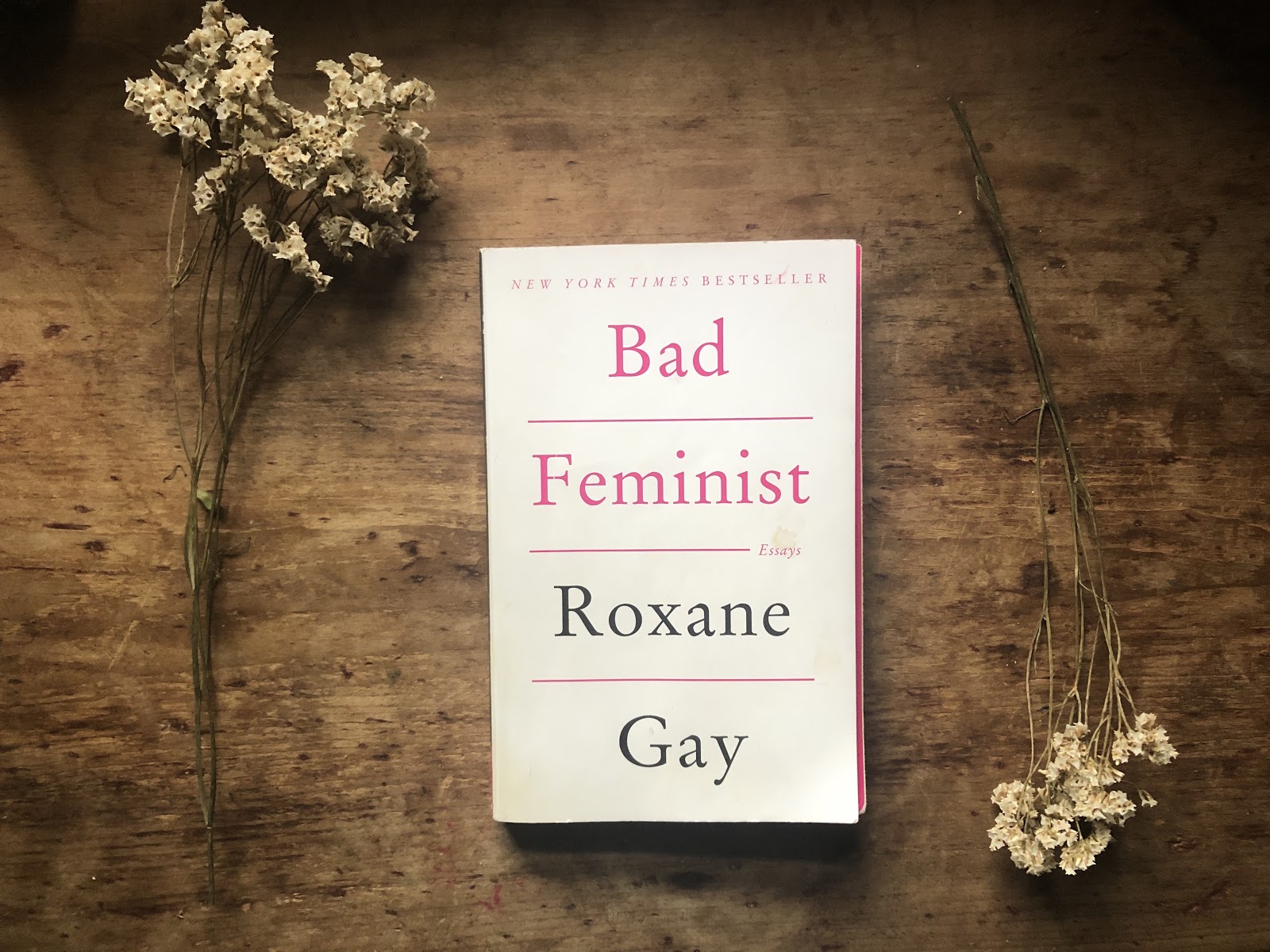 The first time I read Roxane Gay’s Bad Feminist, I was still in high school. As I tread the waters of my conservative school, I desperately clung to my feminist identity. It wasn’t until Bad Feminist that I began to analyze the inclusivity of my beliefs.

Roxane Gay’s Bad Feminist an essay collection that discusses how race, gender, sexuality, politics, and entertainment intersect with feminism. Her essays explore how to strive to be better while living in an imperfect society while also analyzing the current culture. Although it was written in 2014, its commentary still rings true today.

A bad feminist is someone who supports feminism but still fails to model the movement. They may watch shows that stereotype women. They may listen to Chris Brown. But at the end of the day, they are simply imperfect people who recognize the fight for gender equality is not over.

In her introduction, Roxane Gay writes, “Feminism is flawed, but it offers, at its best, a way to navigate this shifting cultural climate.” She explains the movement is flawed because the people who participate in the movement are flawed. But an imperfect movement doesn’t mean we’re not working toward something important. Gay classifies herself as a bad feminist because she recognizes her own shortcomings and rejects the idea of being viewed as the standard for feminism.

The first part of Gay’s book, titled “ME,” gives readers insight into her life growing up as the daughter of Haitian immigrants and her life in graduate school.

She humorously describes her obsession with scrabble and expresses the fear she felt during her first year as a college professor. It’s through these first essays where readers begin to connect with Gay and root for her. You tear up as she recounts the time graduate students whispered about her being an affirmative action student because you know how hard she worked to get there. And you get to cheer for her when she becomes a successful professor who encourages her students to work harder.

Her personal writing style made me feel like I was catching up with an old friend. Gay’s power is that she knows how to relate to her readers, while also educating them.

Some words of wisdom

One of my favorite chapters is a bullet-pointed list of advice about female friendships. I find this chapter to have some of the best advice as she explains it’s okay to have conflicting feelings about your friends, but that’s for you to work out alone.

“If you’re having a rough go of it and a friend is having the best year ever, and you need to think some dark thoughts about that, do it alone, with your therapist, or in your diary so what when you actually see your friend, you can avoid the myth [that female friendships must be bitchy, toxic, or competitive]” (48).

Gay also encourages her female readers to think critically about how they perceive other women. The question of ‘are you being constructive, or are you acting cruelly?’ is one most women need to have in mind when talking about other women. Society trains us to tear women down and judge them by an impossible standard. However, by questioning our thoughts, we can escape this trap and learn to raise other women up.

In a moment of pure vulnerability, Roxane Gay reveals to her readers that her boyfriend and his friend raped her. She hauntingly describes the moment and how afterward she couldn’t return to who she was. The good girl everyone knew was gone.

Through her tragedy, she looks at the ways in which we write stories for kids. Certain people believe that Young Adult fiction is too dark and depraved for children today. They feel it emphasizes pain and suffering over the good in the world.

In response to these criticisms, many authors, including Gay, have come out to defend this genre. They argue it’s ignorant to think children do not face terrible situations and trying to water down these situations only makes these readers feel more alone.

Gay puts it eloquently when she writes: “You lose your name because another one is forced on you. You think you are alone until you find books about girls like you” (145).

Trigger warnings have become more and more common. Not only are people on social media creating their own warnings as they talk about personal experiences, but big platforms like Netflix have taken to providing warnings before shows that discuss difficult topics.

Roxane Gay argues that while they provide order on the internet, there is no way to identify every trigger for everyone: “This is the uncomfortable truth: everything is a trigger for someone. There are things you cannot tell just by looking at someone” (150).

The debates around this issue are frequent. Some believe trigger warnings unnecessarily coddle people while others feel it’s necessary for creating a safe space. However, Gay claims that it’s both. It may provide some sense of security, but people cannot anticipate what may trigger others.

Gay brings up an important point when she states that trigger warnings may be a way for people to ignore their trauma. People may use these warnings instead of learning how to deal with triggers and getting actual help. Nevertheless, she does affirm that it is a privilege to get help.

Other problems with trigger warnings are that they may come across as belittling or censorship. For some, it may seem as if other people are putting up boundaries for them. For others, it may feel like people are saying certain perspectives or situations are too much for the public.

She ends her essay by saying that she understands the need for trigger warnings, but in her experiences, people cannot be protected.

In her essay titled “Dear Young Ladies Who Love Chris Brown So Much They Would Let Him Beat Them” she acknowledges the way society pardons abusers and disregards the women who were victimized.

How are women supposed to feel valued when they confess to being abused and their abuser gets off with a slap on the wrist? So many men in Hollywood are still praised for their accomplishments and talent regardless of their past abuse to women. This tells women that their pain is worth less than their abuser’s talent.

Gay ends her essay by apologizing to women and their willingness to suffer without consent. She apologizes for the way society rewards men who commit violent acts while pushing aside their victim’s feelings.

Back in 2011, The Help seemed like the movie of the year. Millions of people flocked to the theaters to see this fictional movie about a white journalist interviewing Black women in 1960s Mississippi. It detailed the struggles of Black women as they worked in white homes and faced racism.

What was supposed to be an uplifting story about fighting against prejudice failed to escape the white savior trope. It portrays white people as heroes helping Black people who are afraid to speak out. On top of that, it paints a sympathetic story of the white women who employ Black maids.

Furthermore, the writer of The Help misuse African American Vernacular English (AAVE). Like any other way of speaking, AAVE has rules. Yet, they disregarded the grammatical and vocabulary features in the script.

However, the worst part was reading Gay’s experiences watching the movie in theaters. She states “Every transgression, injustice, and tragedy was exploited so that by the end of the movie it was like the director had ripped into my chest, torn my heart out, and jumped up and down on it until it became a flattened piece of worn-out muscle–cardiac jerky, if you will” (214).

Gay believes writers should be able to challenge themselves. They shouldn’t be held back by their race, sexuality, or gender. But when your writing is based on caricatures of marginalized groups, then it’s time to put the pen down and get back to writing what you know.

For as long as racism has been around, so has advice on how to stop racism. This includes tips for people of color on how to act. A key example of this is when Don Lemon gifted the Black community with the advice to stay in school and stop having kids out of wedlock.

Gay states “it’s dangerous to suggest that the targets of oppression are wholly responsible for ending that oppression” (259). She highlights the ways in which Black people are advised to become model citizens as if that is even possible.

Gay goes back to Don Lemon and his beliefs about respectability politics. He believes in it because, as a Black man, he made it to the top. Therefore, he thinks anyone can do it as long as they act properly. However, it erases the reality of institutionalized racism.

During my most recent time reading Bad Feminist, I felt both empowered and challenged. Gay’s writing validates my experiences as a woman. However, she also pushes me to reconsider the ways I interact with the world.

As someone who has tried so hard to fit the perfect mold of what a “feminist” looks like, I now don the label of “bad feminist.” I accept the ways in which I fail and I try to do better.

Read also:
Feminist Books To Read When You’re Self-Isolating
Why The “Not All Men” Argument Makes No Sense
The Pendulum Swings Both Ways: How We Feminists Need To Rebrand Our Movement

How Fighting Racism Benefits Everyone

100 Years On: The Shortcomings Of The 19th Amendment

Hanna Sytsma is working toward her degree in English with a minor in Gender, Sexuality, and Women's Studies as well as Communication Studies at Montclair State University. She aspires to work in publishing where she can publish Young Adult Literature novels for the next generation. For the time being, she is excited to write for the Women's Republic and bring to light topics important to women.