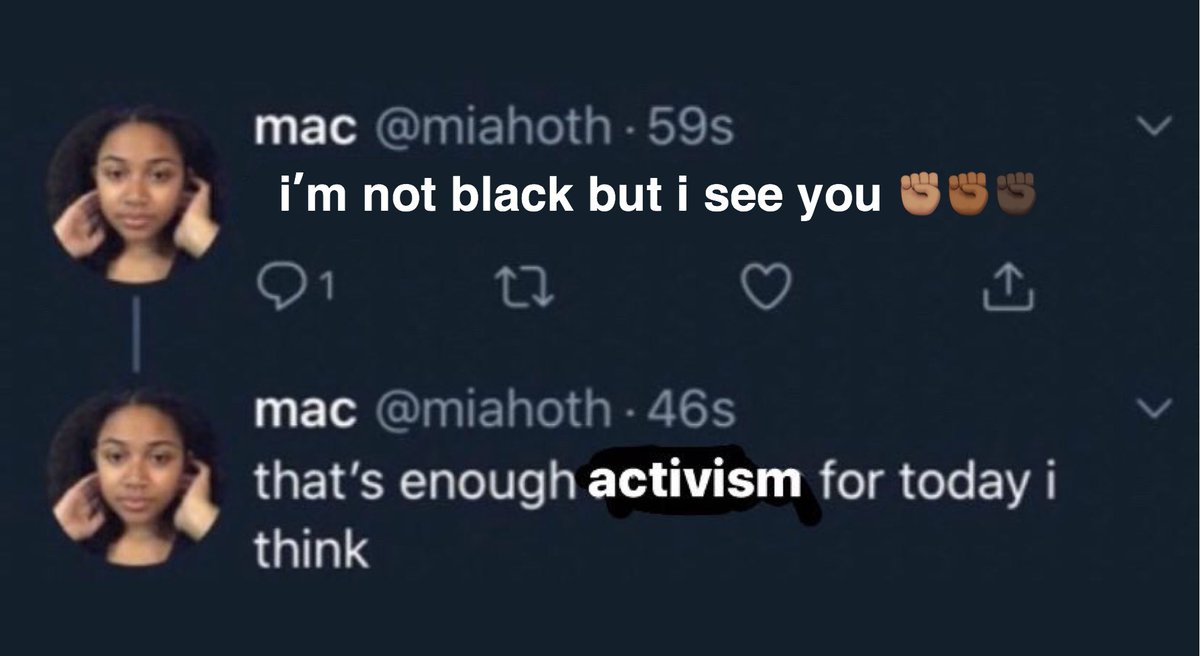 The idea of allyship as a fashion statement is horrid, but unfortunately true. “Performative activism” as a term is deeply contentious. Some believe that it’s an apt way to describe activism which stops at lip service alone, such as multimillion-dollar corporations which tweet about labour rights while underpaying their workers or media outlets which preach self-love but marginalise those of a different skin colour, gender identity or body type than their idea of loveable. Others think it’s a term created to gatekeep activism and provide its users with a sense of moral superiority.

So, what is the truth? While not every instance of a previously misinformed person posting on their Instagram story about gay rights or the #BLM movement is performative activism, the phenomenon most certainly does exist in the world today.

A hashtag is worth a thousand words

In his opinion peace for Al Jazeera, John Metta discussed performative activism in the context of Black Lives Matter. Why is it?, he asks, that given that Black people have been subject to systemic discrimination for centuries, the ones yelling loudest about their own guilt now are white? The term performative activism implies that the “activist” in question is seeking attention, perhaps even praise for their performance. The amplification of white guilt has one purpose: to draw the line between the “good” and the “bad”. Performative activists are not like the other oppressors; they’re socially and politically engaged; they would have voted for Obama three times if they could. (Sound familiar?)

Performative activists can be the loudest in any movement. Yet, this activism is superficial. Like a costume in a play, it can be slipped on and off whenever convenient. Metta mentions a business that put Black Lives Matter in its storefront only to take it down immediately after a scare about rioting ended. The same is true for many other instances of hollow activism. As soon as the movement has gone out of fashion, it is discarded from the thoughts and prayers pile; the “activist” moves on with their life despite not having actually, measurably, contributed to the cause.

Reading posts made by white influencers on #BLM, Holiday Phillips wondered this: “You’re here now, but where are you the other 364 days a year when anti-racism isn’t trending? When racism isn’t tucked safely behind the screen in your hand, but right there in front of your face?” Because fair-weather allies lose their nerve when not in front of a camera. Because hashtags cannot protect a community from state-sanctioned murder. And finally, because there is much more to being an actual ally than posting a black square for one day, then hoping your timeline “returns to normal” by the next. We romanticize the fight for justice without realizing the body count it has, without recognizing that some of the dead never enlisted themselves in the first place.

But all exposure is good exposure…right?

Some ask, “Is performative activism really all that bad?” After all, it does attract more attention to a cause. It is true that public activism can inspire more people to action and raise awareness about political and social movements. Most performative activists truly intend no harm. But as Holiday Phillips notes, it isn’t that performative allyship in itself damages, but that it excuses. It gives us the illusion that we’ve done our part, and nothing else is required of us. If awareness is where we set the benchmark, then what do we do with all these people who know that the elephant is in the room, but are content just to sit and watch us try to shove it out?

Even worse, some performative activists say one thing in public and another thing entirely in private. Corporations make grand statements about racial equality but fail to take that into account in their own hiring practices. People describe themselves as allies but use slurs in confidence, in the heat of the moment. Some performative activists don’t do anything at all on the side, and that’s the problem. Say something! There is no point to your waxing poetic about punching Nazis online if you won’t tell your real-life grandfather off when he spouts the same rhetoric.

In her article for Women’s Republic, Leah Dacosta talked about a racist roommate who was never disavowed by her anti-racist peers. As a lesbian, it troubles me deeply that I have mutual friends with people who loudly announce their bigotry. Cutting social ties is never easy. But who said allyship was supposed to be easy? What right do we have to demand that our ascension into the role of perfect activists be perfectly smooth, when the ones we’re fighting for fought an uphill battle just to get on their feet?

So, then, what should we do?

What should we do then? Everything we can. Show up, sit down, and stick your neck out. If you identify as an ally, recognize that the movement is not about you; you are merely participating in it as we all should have been from the very beginning. We have to talk the talk and walk the walk if we want to see real change, leaving performative activism behind for those chasing social capital. There is nothing wrong with posting an infographic on your Instagram story. But consider: is there more you could be doing? Could you be calling your representatives, making a donation, having a difficult conversation with a friend or family member? Getting the word out is not enough if no action accompanies it. The pen may be mightier than the sword, but it’s the sword that will see immediate change.

Read also:
A True Leader Does Exist
How To Reframe Self-Love: Skin Positivity Edition
The BLM Movement Isn’t Truly Over