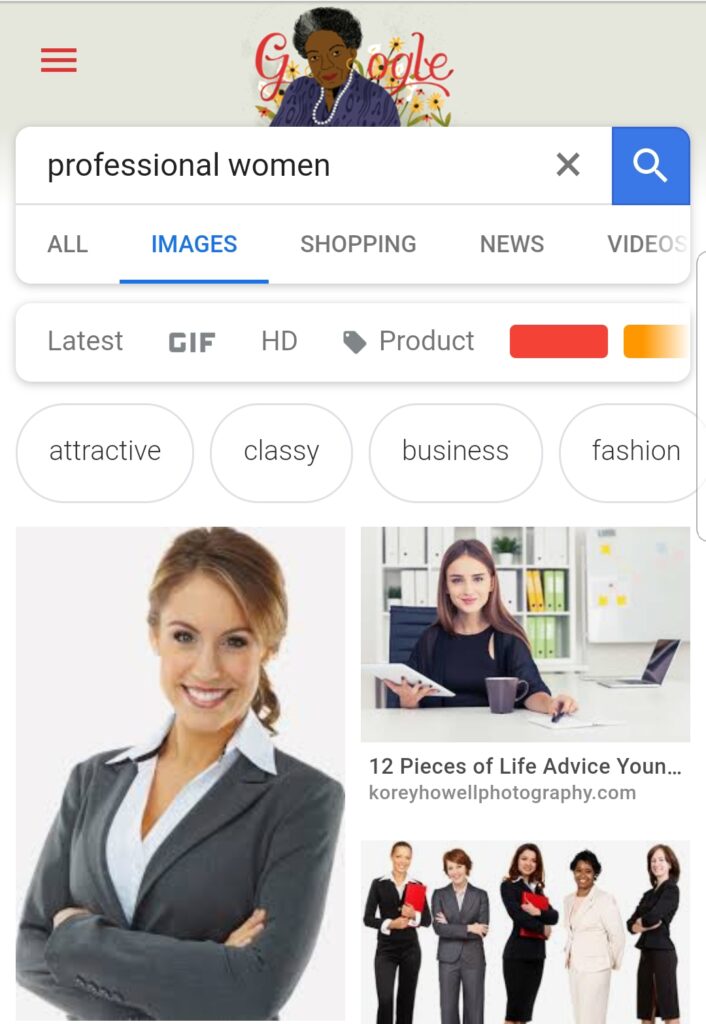 What you get when you google 'professional women'
Tweet

I have been accused of being many things in my life.  Crazy, queer, weird, a drug addict, a liar, a sexist, too nerdy, too fat, too high maintenance.  Some of them are true (I have a playlist that is all the Doctor Who themes since 1963 in chronological order), some are flat out lies (I am so bad at lying, it is kind of embarrassing) and some are true but were meant as insults (I am a fat queer, get over it).  There is one thing though that I will never really be accused of; being ‘professional’.

Now, to be clear, my day job is in customer services and while I am not the greatest sales person or the best team player you’ll ever meet I am good with customers, they often comment on my friendly, professional conduct.  What they mean is that I did what they wanted me to do quickly but also took five minutes to chat about the weather (which is basically a national pastime here in Britain).  It is never something my bosses would say about me.

Here is the problem; I do not look or sound the part.  If you google image search ‘professional women’ nearly all the photos are of thin women wearing suits, shirts, heels, shift dresses, blazers and neat silver earrings with their long hair in ponytails or neatly crafted straight lines over their shoulders. Look as well at those related searches; ‘attractive’ and ‘classy’ rate higher than ‘business.’

What you do not get are images of fat women with shaved heads, tattoos, mermaid necklaces, visible disabilities or who occasionally go to work dressed as Superman just because they felt like it.  In other words, you do not get me.  As for sounding professional, I do not have the broadest Yorkshire accent and my phone voice is pretty sweet but when I’m not being recorded I swear, shout, grumble and chat about butt sex at 8.30 am (in my defense of the last one, there was context).

You could easily say these are almost all things I could change.  I can grow out my hair, buy a blazer that covers my arms, try and find a shirt that can accommodate my absolutely gigantic tits (40GG, if you were wondering), try and find something that doesn’t boot to wear on my dino feet and dip into my limited collection of sensible jewelry.  Not much I can do about the crutches, which ruin most neat aesthetics, but I hope most employers would forgive that.  For that matter I can replace every ‘fuck’ with ‘gosh’, pretend I’m not annoyed by people getting crumbs on my desk and not read Guardian op-ed pieces about the prostate with my deskfast (breakfast at your desk…deskfast).  But my question is…why?

Why should I modify myself to fit into a mould that actually has nothing to do with how good at my job I am?  Try to think back to being at school and that one teacher that changed you and your life.  Tell me, was that teacher the one who was a stickler for rules and structures or was it the one who low key rebelled?  The teacher that changed me was my English teacher, who recognised I was way ahead of the class (it was a mixed ability class) and let me do my own thing as long as nobody else noticed.  He encouraged me to use the time to write freely and from that, a poet, storyteller, and blogger was born.  According to the rules, he should have made me read along with the class no matter if I had already read the book twice and done the coursework.  Was he unprofessional?  No.  He did exactly what a teacher should do, he took a young mind that was struggling to find something to fill it and gave it purpose.  He recognised I was wired a little differently and steered into the curve rather than trying to straighten me out (there’s a queer joke in there if anyone wants to make it).  Had he been a ‘professional’ I would have fallen spectacularly out of love with reading and writing, rather than spectacularly in love.

Why is this a feminist issue?  Allow me to demonstrate with an example I once faced at a job.  A boss asked me to put a cardigan on to cover my tattoos, as per company policy.  The man sat next to me had a tattoo of the same size in the exact same place on his arm that was as similarly inoffensive as mine.  He was not asked to put on a jacket to cover up.  When challenged the boss had no reasonable response, even admitted I had a point, but said that on women it was seen as less professional and the Big Bosses would have an issue with it.  I refused and sat there freezing cold the rest of the day because I am a stubborn bitch like that.  Had we both been asked to cover up I would not have objected but the basic fact of the matter is that women are held to higher standards for professional appearance and behaviour than men.  Deborah Frances White discusses in ‘What’s The Deal With Men?’, how men who have deliberately ‘manshevelled’ (made themselves look scruffy because they think it makes them look like a genius) can get a top level job before learning how to smarten up, a woman could never become a CEO without a basic understanding of hygiene, even if they are an actual genius.

There is also a prevailing opinion that ‘feminine’ things, such as the colour pink, are unprofessional.  Look again at that google image search.  The women are all wearing black, grey, blue.  I took me 23 pictures to find one wearing anything pink and that was just a very subtle jumper under the traditional black blazer.  Anyone turning up to work in a pink or purple suit, regardless of gender identity, would not be deemed professional looking.  Can you picture anyone rocking up to a board meeting with CEO’s and CFO’s and all those other acronym people in a bright pink blazer?  Or sitting down to write on a pink pad with one of those pink fluffy pens?  No, they’d be laughed out of there.  And probably fired.  But why?  Can a fluffy pen not write as well a boring old biro?  Can a pink notepad not contain great ideas?  Is a person wearing pink incapable of being useful?  As a good friend of mine once asked, what’s so unprofessional about pink? *

Here is the basic answer; the standard for professional image and behaviour was set by men.  For a depressingly long time, the only professional people were men so in order to be taken seriously as professionals women are expected to be like their male counterparts.  Actually, no, we are expected to be better.  To be smarter, harder, more dedicated workers.  Masculinity is the standard to which we are expected to conform, from our clothes to our attitudes.  The paradoxical thing about that is that when we do conform when we take on ‘masculine’ traits and gain success we are deemed too bossy, too bitchy, too ballsy.  Is there some magic Goldilocks middle ground for us?  Somehow, I doubt it.  We are screwed from all sides.  And not in a fun way.

The fact my current employers allow me to be myself means that I am more comfortable and therefore more productive at work, but what happens when I want to move on?  What happens when I finally finish my studies and go into a different field?  How many jobs will I be turned down for because of the way I look?  I mean, I got turned down for a job in a high street fashion shop because they had a policy of not employing people with dyed hair and that was when my hair was longer, I had no tattoos and I was less…let’s go with ‘rebellious.’  Despite extensive experience in retail and knowledge of the brand, I was deemed not the right fit as they preferred staff who looked ‘natural’.  It wasn’t even my brightest hair colour, in fact by my standards it was downright subtle.

These sartorial choices we make are not arbitrary, they express our personalities and by policing what people should look like we are policing what they should be like.  By keeping out people who look a certain way – feminine people, unconventional people, creative people – we also keep those traits out of the jobs, narrowing both the talent pool drawn from and the output of ideas coming out of ‘professional’ industries.  If we keep employing the same type of person for the same type of jobs those fields will not evolve and society needs to constantly evolve.  It’s all very well saying that equality is getting closer due to things like the #metoo and #blacklivesmatter movements but unless this leads to a wider range of people being accepted, employed and equally paid in fields like law, medicine, politics, education and more then we are still narrowing the group of people that decide what direction our society takes.  We are still narrowing our choices, narrowing our ideology and narrowing our world.