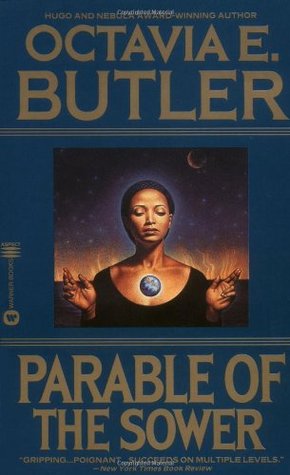 In Octavia E. Butler’s 1993 dystopian fiction, Parable of the Sower, the United States is loosely bound chaos. I was uncomfortable reading Parable of the Sower because it feels prophetic in many disturbing ways. The book begins in Los Angeles in the year 2024 with Lauren Olamina, a young woman living in a community trying to insulate themselves from the destruction of the world outside their gates. The people in this community depend on each other, growing and trading food, educating children, burying their dead, patrolling for invaders, and literally putting out each other’s fires.

This novel made me squirm because of how near 2024 feels and because the characters mistrust the police and battle wildfires and worry about the rising cost of water. The blurb on the back of my 2019 copy reads, “When global climate change and economic crises lead to social chaos in the early 2020s, California becomes full of dangers…” And here I am in 2020, in California, reading about events that mirror the speculative conversations I used to overhear the elders in my family speak in hushed tones after dinner, events that take place in counties I’ve visited and cities I’ve lived in.

The adults in Lauren’s community still cling to and hope to revive the security of the past (our present, or near to it). Though Lauren is young and perhaps a bit stubborn, she has foresight enough to understand that change is inevitable and that the only way to survive is to embrace change. Lauren is bold in ways I can only dream of. At the start of the novel the fifteen-year-old is writing her own religion, equipped with its own esoteric verses:

Laurens’s religion places emphasis on action; not only is change inevitable, but it is our duty to shape it. Her philosophy speaks so poetically to our current moment, to the danger of complicity and the danger of denial.

In a world of extremes, Butler’s characters must often barter empathy and morality for self-preservation. Lauren lives with hyper empathy syndrome, which means when she witnesses someone else in pain, she shares that pain. Lauren pays double for such bartering, as she feels the death of the person she must kill to save herself. For much of the novel, she hides this fact about herself, afraid that others could take advantage of her condition. In fact, when Lauren meets formerly enslaved people, she learns that slave owners value “sharers” like herself because their empathy makes them more vulnerable to manipulation.

Butler makes the reader understand that it takes a conscious decision to bear someone else’s burden, knowing that sharing their hurts will hurt you. Empathy begins as a weakness in Lauren, a sickness that, in some cases, physically debilitates her, but morphs into something Lauren can use to build a community. The characters find strength in unity, not only because more people provide more labor or protection, but also because living and cooperating alongside other people demands trust and respect. Through empathy, the community becomes a valued, sacred element that keeps hope alive. Empathy, therefore, serves as more than just mere emotion; it is a catalyst for change.

Like many people currently having (or dodging) difficult conversations with friends, family, coworkers, and strangers online about politics and issues that go beyond a political party, Lauren butts heads with her father on how to lead a community. Lauren’s father wants to equip the community with the tools to defend itself while Lauren wants to mobilize. For Lauren’s father, it is “best to begin by teaching.” This is a piece of advice Lauren seems to take to heart as she begins to construct her own community, trying to find a balance between individual freedom, the reality of danger, and collective comfort.

Butler seems to imbue the entire novel with this sentiment, using dystopian fiction as an instructive device to show us what we could become if we do not change, and thus what we are now. Unlike many other authors that speculate on the future, Butler did not ignore or erase the realities of race, gender, and class in our society. She did not pretend that although her fictive world descended into chaos on all other levels, racism or sexism magically faded with time. Many authors in the speculative fiction genre center on the white and male perspectives, so if racism and sexism persist in the future, the reader does not see it because the lens is so narrow. Butler’s take on the future, however, makes the assumption that the disintegration of society actually exacerbates the social issues we have left unhealed.

In Parable of the Sower, violence often has racial undertones, so mixed-race couples or groups traveling together must exercise greater caution in how they interact with the outside world. Similarly, traveling women must move in groups, with a male companion, or even present as the opposite sex in order to escape the constant threat of sexual violence. Economic desperation and lax labor laws allow slavery to rear its ugly head in a familiar way–companies can buy out entire cities and implement a sort of debt labor that entraps workers in a spiraling system. Butler did not shy away from these themes because she knew that the image of the future would lack clarity or accuracy without them.

Reading Parable of the Sower, we might feel justified in our comparative comfort; we have progressed too far to believe these injustices will continue to infiltrate society in the future. But for the children without parents at the border or for victims of police brutality, this is a living dystopia. Much of our history reads like a dystopia. The power of dystopian fiction lies in its nearness to reality, giving us the crystal ball warning of what is to come so that we might turn back with clear eyes on the present, armed with empathy and a will to shape change and begin the process of rewriting the present.

Read also:
5 Reasons To Pick A Major You Love
Don’t Freak Out But Your Favs Are Problematic
Willful Ignorance

Indian Cinema In 2020: Impact On Society

The U.S. Death Penalty: A Harmful And Racist Practice

A student of the environment. I believe in empathy, community, and uplifting womxn. 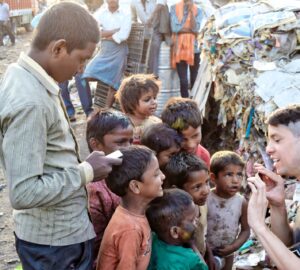