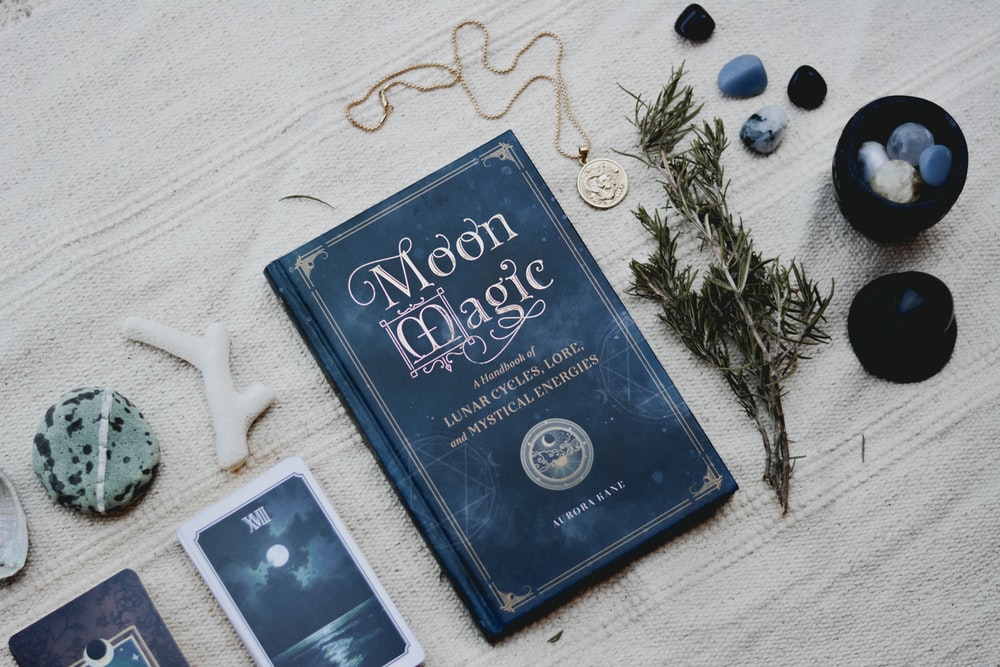 The image shows a blue “Moon Magic” book with other witch materials such as, herbs, stones, and tarot cards.

Witchcraft: what we think it is

When we think of a witch or witchcraft, the mind generally reels back to hooked noses, black cauldrons, a broomstick, and an impressive cackle exulted by the Wicked Witch of The West in “The Wizard of Oz.” The media has given us spooky stories and childlike wonderment around witches, including fantastical spells and poisoned apples. The topic of witches normally appears only as a Halloween trope, and rarely as a mainstream identity.

It’s something prevalent in our favorite movies and books including,  the magical children’s book series, “Harry Potter,” the 90’s film, The craft, complete with brown lip liner and black chokers, or Disney Classic, Sleeping Beauty with the feared Maleficent. These pop culture references bring forth images of potions and draughts and spells and the devil. It is a wondrous fantasy that sparks joy and a creative outlet.

The witch in its traditional form according to the witch trials of the fifteenth century in America and even earlier for Europe. “The Malleus Maleficarum” was published in 1486 and was a text written to describe the witch as an unjustifiable wicked creature with baby-killing tendencies and a personal relationship with the devil. Most “witches” were disenfranchised women living on the literal and metaphorical margins of society. They were outsiders of their village and community, often living off the beaten path in seclusion.

Accused witches were poor beggars and ostracized from their peers. Some were young women wanting for power as their only place in the patriarchal society was to obey their fathers or husbands. They could not yet “provide” the community with children as they were not at childbearing age, as most were around twelve or thirteen. Women so far on separate sides of the spectrum had no power and were outside of the childbearing years.

This distinction is important as at this time, and for some time after, a woman’s greatest contribution to society was procreation. Even then, this sense of contribution was often controlled by their husbands. Puritanical and patriarchal standards condemned witches. Other witches are depicted as sexually explicit women, unwillingly seducing men, making them sin.

These women were damned due to their expression of sexuality and power. The Salem witch trials are the most well known for Americans. In addition to sexual expression, women who were experienced in healthcare and specifically women’s reproductive health were called witches and persecuted. Midwives were seen as heretics. The trials were then embellished and expounded upon by Arthur Miller’s “The Crucible.” This was often required reading for most students and was an introduction and, perhaps, the final literary piece on witchcraft in their education.

Using a witch as an identity is becoming more prevalent today. While most of us think of witches or witchcraft has been buried centuries in the past, it’s very much a part of our current culture. The exact definition of witchcraft is elusive. It’s essentially a spiritual or emotional connection. Its largely symbolic, like practicing any other faith or religion. It encompasses feminism, inclusivity, healing, love, spirituality, and identity. People of all backgrounds can find a community of welcoming individuals.

Many individuals who were not accepted by their church turned to witchcraft as a sense of self-expression and freedom. It provides them with a sense of purpose and spirituality that they could not get from their “traditional” religious upbringing. The beauty of witchcraft is that it champions love and diversity, acceptance, and difference. Witchcraft includes transgender witches, biologically female witches, Black witches, Native American Witches, Asian Witches, Herbalists, Brujas, and more.

Witchcraft in activism and politics

A new age of witchcraft is among us with crystals and tarot cards and moon rituals. While these elements are incredibly important, it is the cause, the roots, and the resistance that is turning political tides. At the first Women’s March in Washington D.C in 2017, dozens of signs read, “we are the granddaughters of the witches you could not burn.”

One of the most famous witches, Amanda Yates Garcia, resides in Los Angeles and goes by the name, The Oracle of Los Angeles. She is the daughter of a self-proclaimed witch, and she specializes in healing practices, tarot card reading, spells, and divination. She famously discussed witchcraft with Fox News’s host, Tucker Carlson. Jex Blackmore is a columnist and a performer. She is based in Detroit, Michigan, and uses poignant performances to advocate for women’s reproductive rights. She is a self-proclaimed Satanist. Contrary to popular belief, she does not worship the devil. Instead, she identifies with Satan’s rebellion in the eyes of the church.

In biblical times and mainstream religion, Satan was a free thinker, independent of authority, and capable of independent thought. The current president of the United States, Donald Trump, is a big proponent of the phrase “witch hunt” to describe attacks on his character and policies, revealing his utter ignorance of the power that witch hunts once held. Witch hunts prosecuted and executed hundreds of women for seeking education, basic human rights, and individual liberties.

Several witch covens and activists cast spells on prominent political leaders. In February of 2017, hundreds of witches in the United States cast a spell on Donald Trump to protect people and the nation from Trump’s insidious policies and actions.

Congresswoman Alexandria Ocasio Cortez, better known as AOC, is a champion defender of women’s reproductive rights, the environment, the working class, and basic human rights.  She has been accused of witchcraft from her opposition on the right. Hilary Clinton, another incredibly powerful woman, was called a witch throughout her presidential bid in 2016.

In 1968, a group called W.I.T.C.H cursed Wall Street. They went out in movie-style large pointy black hats and the famous financial district. They were protesting the vast wealth inequalities and the negative effects of capitalism. Today, people who identify as witches are supporting the feminist movement. Witches are largely a symbol of representation for the silenced, marginalized, the unseen. They represent all races, ethnicities, and creeds.

Classes on witchcraft can be found on many Universities’ class rosters, including on my college campus. Witches can be found at protests, in your classroom, the workplace, or as business owners. They have taken the word “witch” and its negative connotation to mean something of action and desire for an accepting community. They are staunch defenders and advocates for self-expression, self-worth, and humanity. The resurgence of the witch is powerful, prevalent, and tenacious.

Read also:
Why Witches In TV And Film Aren’t As Feminist As We Think
My Mother’s Style In Photographs
The Divided Struggles Of Interlocking Systems Of Oppression In Reproductive Justice

How To Survive Your Online Semester: 6 Tips From A Homeschooler

Content Contributor
Hello, I'm Celeste and am currently a rising junior at Michigan State University. I major in Public Policy and am a huge advocate for Women's rights and finding solutions for our struggling social situations in the United States political and economic systems. I have a twin brother and am an avid reader, kayaker, hiker, beach lover, beauty fanatic, and beach enthusiast.