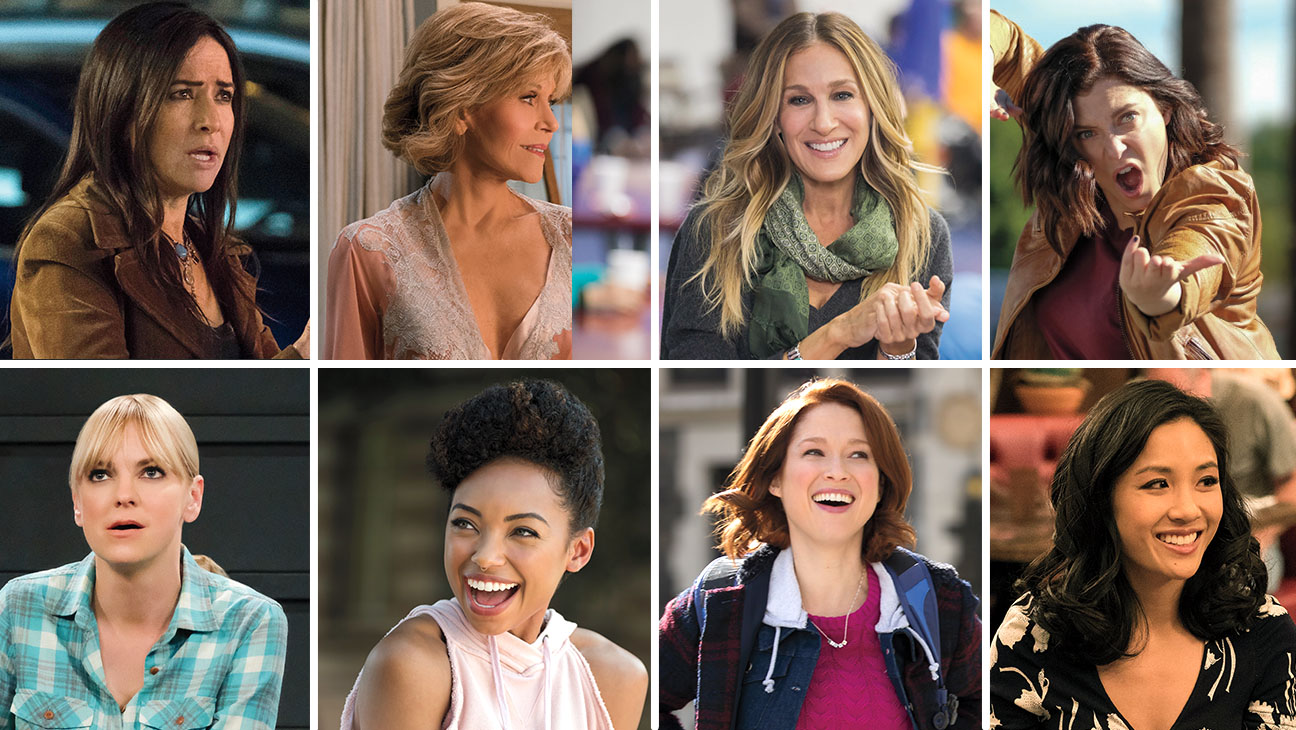 It wasn’t the lack of female lead characters that struck me about family films…It was the dearth of female characters in the worlds of the stories — the fact that the fictitious villages and jungles and kingdoms and interplanetary civilizations were nearly bereft of female population…This being the case, we are in effect enculturating kids from the very beginning to see women and girls as not taking up half of the space

Even three years after the largest single-day of protest in U.S. history, feminism remains a sensitive and controversial topic. Despite social media influencers, some people do not know what feminism really means. And who can blame them? The average American teen spends one-third of their leisure time watching television. This leaves only so much room for news and educational programs. With so many hours spent on entertainment, it leaves the question of what exactly movies and TV series want us to believe. Hollywood has a history of not allowing women into male spaces. And with girls rarely being seen or heard, children begin to learn who is “valuable” to society.

For those who could afford it, seventeenth-century dwellers looked towards theatre as a means for entertainment. While technology was not available, gender roles thrived in live theater. Dating back to ancient Greece, men played all parts, often dressing up in “drag” for female characters. The same could be said for Shakespearean plays, as the role of “Juliet” was intended for a young boy.

Women were left out, as their place was not the theatre. With their subservient role to men and the belief that respectable women should not act, a person sees why entertainment industries are the way they are now: male-dominated.

Technological advances and the “dumb blonde”

In 1927, something magical happened. A man named Philo Taylor Farnsworth invented the television. While an impressive invention, this did not stop sexism. Women played generic roles, such as the “damsel in distress,” the “love interest,” the “erratic woman,” or the “bitch.” One film that comes to mind is the old monster movie, King Kong. The 1933 movie presents an enormous gorilla who kidnaps Fay Wray’s character, Ann — making her his bride. Ann does little to defend herself from Kong and spends most of the movie screaming in his hands.

Another actress typecasted as the “blonde bombshell” was Marilyn Monroe, as she often played the dumb golddigger in movies, such as Some Like It Hot (1959) and Gentlemen Prefer Blondes (1953). In these movies, Monroe’s character asserts the fact that she “isn’t very bright” and that she needs a rich, respectable man to take care of her. Despite featuring her singing abilities, “Diamonds are a Girl’s Best Friend” makes its message clear: women want money.

Even less room for the Black woman

White women often ruled these genres, but black women were far worse off. Stereotypical roles for black women included the “Mammy,” the “Sapphire,” and the “Jezebel.” The “Mammy” is a racist portrayal of a larger, happy-go-lucky black woman who is a nurse or servant to the white family. One famous “Mammy,” and the first black person to win an Oscar, was Hattie McDaniel in Gone With the Wind (1939). She doesn’t mind taking care of the O’Hara girls, and her intimate relationship with them undermines the slave experience.

The “Sapphire” caricature is also a racist archetype. Yet, their attitudes lie on the other end of the spectrum to the “Mammy.” Instead of being happy-go-lucky, they fall under the “angry black woman” stereotype that often shows them being rude, violent, and irrational. One example (that started it all) would be Sapphire from the radio show Amos ‘n’ Andy (1928-1960). Her behavior was used as a form of situational comedy.

The “Jezebel” is yet another one of the few roles black women were allowed into. In television, they were often portrayed as being promiscuous and hyper-sexual. The belief that black women had “animal-like sexuality” stood in contrast to the “pureness” of white women. This also allowed white men to sexually assault their slaves because the Jezebel “wants it all the time.” The silent film The Birth of a Nation (1915), where a mulatto character named Lydia Brown seduces “good” white men, even glorified the Ku Klux Klan.

The strong and “sexy” female hero

Later on, the twentieth-century saw the heights of the Civil Rights Movement (1954-1968), The Sexual Revolution (1960-1980), and the Stonewall Riots (1969). White women, men of color and women, and the LGBTQ+ community took to the streets, formed radical movements, and demanded to be treated as equals.

The film industry seemed to respond and appeared to treat women with more fairness than before.

Lynda Carter played everyone’s favorite Amazon, Wonder Woman, in 1975. Finally, a woman could beat up the bad guys, in this case, the Nazis, and get away with it. Many movies and TV shows would soon follow in its lead. The Bionic Woman (1976), starring Lindsay Wagner, told the story of a woman who received bionic implants after a skydiving accident. Using the powers of her implants, she goes on secret missions for the Office of Scientific Intelligence. The same year would release the original Charlie’s Angels, where Jacklyn Smith, Farrah Fawcett, and Kate Jackson often used their feminine wiles to save the day.

The closing of the century would also bring Xena: Warrior Princess (1995), Buffy the Vampire Slayer (1997), and Charmed (1998). These shows gave young girls hope. Women could have their own battle sequences and stories just for themselves…as long as they were sexy while doing it.

Shows like Charmed took the lead from Charlie’s Angels and became an excuse for “dressing up” the actresses. Its Halloween episode “All Halliwell’s Eve” showed the three sisters dressed up as sexy witches. Xena: Warrior Princess was not much different. The Amazon warrior wore a short leather dress most of the time until episodes like “Cradle of Hope” and “Who’s Gurkhan?” required Xena and her sidekick, Gabrielle, to belly dance.

Intersectionality is defined by American Civil Rights Advocate Kimberlé Crenshaw as “a metaphor for understanding the ways that multiple forms of inequality or disadvantage sometimes compounds themselves.”

For example, in the 1990s, a study of the NBC network’s news division revealed that out of 270 jobs, white women encompassed 121 positions while black women only had two.

Thus, women of color had to work harder than white women to make themselves present.

Some movies like The Joy Luck Club (1993) and Eat Drink Man Woman (1994) featured female Asian-American actresses. Yet, they often succeded through stereotypes. The Asian woman could either break away from her family’s tradition or be depicted as a prostitute. These Asian-American roles, whether it involved karate or the sex industry, attracted people to the movie theaters.

The film industry and modern-day feminism

Arriving here in the twenty-first century, issues of the past remain, in subtle or not so subtle ways. Gender pay gaps still exist, as was the case for Jennifer Lawrence and Amy Adams being paid less than their male counterparts. Sexual violence is business as usual for Hollywood. Before the “Me Too” movement was started by Tarana Burke, women were expected to cater to men’s sexual desires and stay silent. Yet, several accused men have kept their acting careers and have paid victims into silence.

Even so, in 2016, we witnessed a miracle called Hidden Figures.

Taking place in 1961, the movie depicts real women of color who worked as “Human Computers” and aspiring engineers for NASA. In their race against the Soviet Union, Katherine Johnson, Mary Jackson, and Dorothy Vaughn, continuously help John Glenn’s first American orbital spaceflight off the ground, without receiving much credit for it. Audiences around the world believed this movie changed everything. Finally, women of color had been shown as smart, capable, and irreplaceable.

Only a year later, would the next Wonder Woman adaption come to theaters? Becoming the highest-grossing superhero movie and female-directed live-action film of all time (later beaten by Captain Marvel in 2019).

To some, this may not seem like a big deal. However, evidence shows Hollywood’s gender disparity with directors.

No stranger to criticism, the FX network was called out in 2016 for not hiring more diverse TV directors. In response, the FX CEO John Landgraf wrote to all of the showrunners to fix this problem. From this overhaul came shows like Feud (2017-) and Rel (2018-2019). However, one that stands out the most is Pose (2018-) for its historical portrayal of New York City’s LGBTQ+ and ballroom community in the 1980s. The show, in particular, features transgender women of color, who experience daily stigma for being who they are. Despite having the largest transgendered cast of series regulars, Pose received criticism for its colorism problem in 2019. No TV show is perfect, but Pose holds as one of the most groundbreaking series of the decade.

One article cannot cover the decades of cinematography and all of the groundbreaking, or not-so-groundbreaking, films that came with it. Nevertheless, sexism in Hollywood still exists, and it takes more than one or two “diverse” movies to bring change.

So how can the average person help?

If people don’t demand diversity, then everything will stay the same. Never stop fighting for what you believe in.

Because the battle isn’t over yet.

Read also:
Film Review — The Half Of It
Disney Needs an LGBTQ Princess Next
No, The Good Place’s Jason Mendoza Does Not Defy Asian Stereotypes

Lash Me Up: A Creative Memoir On The First Time I Tried Eyelash Extensions

Jamie is a graduate student at Sacramento State who is pursuing a career in Creative Writing. She is also a sociology minor who loves to study gender and race relations. Her favorite things to do include reading, writing, and yoga. Currently, she is reading American classics next to her chihuahua mix, Willa.