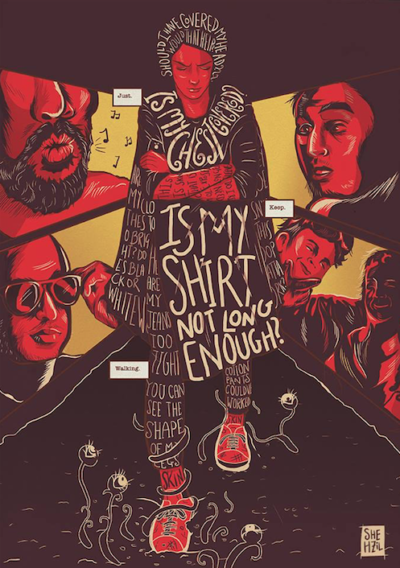 The Global #MeToo hashtag has inspired women and men around the world to talk about their experiences and in many cases identify their abusers. But it has failed to produce any significant consequences for the accused in most of the cases. While Harvey Weinstein and Bill Cosby may have faced grave consequences for their crimes, yet the continuous support given to sexual abusers like Chris Brown and late Michael Jackson sheds light on how eager are we to dismiss this issue as being a petty one.

In Pakistan too, Meesha Shafi’s accusation of sexual harassment against Ali Zafar has hardly impacted his career. His movie Teefa in Trouble has collected 22.31 crores in total globally despite the fact that there were 7 other women who have also made statements of sexual harassment against him. Not only this, but he continues to be interviewed without a single mention of this issue as if it was just a fleeting scandal against him. The popular opinion in Pakistan regarding this issue is that Meesha has used a cheap tactic to defame Ali and his movie. The media and news all seem to be fully promoting Ali and his movie’s success. Above all, the governor of Punjab recently dismissed Meesha’s appeal (under ‘Protection Against harassment Of Women at the Workplace Act 2010’) for not fulfilling conditions of a ‘workplace’ where harassment against Meesha took place.

The big question is if this case does not fall under the above-mentioned act, which act does it fall under according to the law? NONE! Which means every type of harassment women face on the streets or in their private spheres can be and most probably will be easily dismissed. While Meesha may decide to appeal to higher court, the trend of dismissing such cases may unfortunately continue and Ali may end up being a socially proclaimed genuine person. A party which openly stood against ‘Women’s Protection Bill’ is now in power and one cannot simply hope against hope that it will address issues like harassment against women let alone violence.

So what other options the current social and legal structure leave us with? We can gain inspiration from Marie Laguerre, a woman who was slapped by a harasser publicly in Paris. Despite approval of bill which outlaws gender-based harassment in public in France, she says that law is not enough to address issues like these because for it to be functional, every street needs to have a police officer and those police officers have to have a clear idea what is sexist behavior and these two expectations are pretty non-realistic. She calls for investment in better education and changing mentalities and she also has developed a website for women to share their stories.

The current sexual harassment scenario in Pakistan is certainly worse than in France. The legal system does not even recognize harassment on the street as an issue and the female political representation is very minimal and weak. Maybe in these conditions, we need a grass root movement which facilitates women to come out and share their experiences of sexual harassment on streets and identify the perpetrators. Maybe in this way, enough victims and enough perpetrators can be identified to make people realize the gravity of the situation and once it becomes realized as a national issue, people may actively work to address it through education and awareness. For silence won’t change anything, nor will working within a system which is sexist and dismissive! It’s time we fight for our rights just like we fought against Hudood Ordinances during the Zia-ul-Haq era!