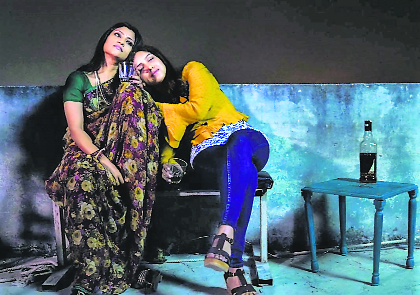 Some revolutions come packed in stories and characters, that end up feeling quite personal and relatable. One ends up associating the characters to someone they know or to themselves. Those characters and stories might be small, yet they end up giving one the reminders that we unceremoniously bury. I picked a similar revolution packed in 120 minutes some days ago.

We all sit in isolation with scary times holding us hostage, and we consume endlessly to feel less alone, one scroll at a time, one episode at a time. Well, if you’re looking for recommendations for a new consumption, I’d suggest you watch the Bollywood movie called “Dolly Kitty aur Woh Chamakte Sitaare” (Dolly Kitty and those sparkling stars), which is streaming on Netflix.

The movie’s very existence is interesting to note as it is written, directed and produced by women. While watching this movie, one is naturally reminded of the earlier work of the director-writer Alankrita Srivastav, “Lipstick under my burkha”, which dealt around the topics of female pleasure and sexuality.

It was refreshing to see the actresses in “Dolly Kitty aur Woh Chamakte Sitaare” to have a character of their own. They brought a story with themselves on the screen and not just a body carefully placed to appease the male gaze. To watch this movie was a good break from seeing the constant representation of actresses as yet another love interest of the “hero” or worse, wrapped as a manic pixie dream girl, sold in a so-called progressive storyline.

In this movie, Bhumi Padenekar plays the role of Kaajal, who is the younger cousin of Dolly, aka Radha Yadav, played by Konkona Sen Sharma. She comes from a village in Bihar to Greater Noida to stay with her sister Dolly and brother in law, Amit, played by Aamir Bashir. The story is based in a middle-class household.

The movie starts with Dolly and Kaajal at an amusement park, laughing and enjoying amongst themselves. It essentially opens with a glimpse of sisterhood and women’s friendship. Soon after the first scene, Kaajal and Dolly are found in a haunted house where Kaajal reveals to her sister how her husband has been hovering around her, making unsolicited sexual advances. This claim is denied and laughed off by Dolly, who tries to justify her husband’s actions.

Kaajal shifts to a hostel to avoid the sexual advances of Amit. Soon after, she is employed by an app called the Red Rose Romance app, which is used by men to get telephonic sexual and romantic pleasure. The name allotted to her in the dating app is Kitty. The job disgusts Kaajal initially, but soon after, it gives her a sense of purpose, security and allows her to exercise her choice. When Dolly discovers about her sister’s job and shames her for it, Kaajal mentions how she is not ashamed of it. She says her sister should take pride in the fact that a woman such as herself from a lower class and caste family and a backward village is working in a city.

Dolly is positioned as the typical “Indian housewife” who’s trying to do it all. She works at an office as well as manages the household work and her kids. Her character develops as the story proceeds. She is often found questioning herself because of the lack of sexual life shared with her husband and her. She assumes that something is wrong with her vagina because she often finds difficulty in having sex with Amit.

The film packs a lot of progressive themes under one screen and is abundant with metaphors. Starting with the title itself, as Dolly and Kaajal learn to dream of the twinkling stars, they also realise that not all that shines is gold, or in this case, stars. These hints and nuances of deeper themes are carefully placed throughout the movie.

For instance, in one of the initial scenes, Kaajal is shown as a factory worker who leaves her job because of the mistreatment of workers. While quitting the job she tells her boss, “Hum factory worker hain, aapke gulaam nahi” (“I am a factory worker, not your slave”). There is another small scene where a healthy woman working with Kaajal casually responds to Kaajal‘s banter by saying, “Body shaming ka zamana gaya” (“The days of body shaming are bygone”).

As the film proceeds, it is seen that Dolly’s son does not conform to masculine stereotypes. He prefers to play with dolls, casually uses girls washroom, tries out his mother’s bra and likes to wear frocks.  Within the movie, the camera also captures an extremist religious gang, which is seen passing comments about people of the minority community, heckling an event by claiming that it is against the cultural ethos of the country and beating up lovers at public places. There are glimpses of the city of Noida and a very closer to the home reality of the way middle-class people rejoice in smallest and simplest of events, such as a promotional event at a mall, open DJ by local artists, etc.

Through the character of Dolly, we trace the journey of a woman who’s from a conservative household and had a tough childhood gain liberation through things that might seem small but give her extreme happiness and most importantly, an agency. This involves acts of wearing jeans as against the suit and saree every day, going out for a drive at night to Delhi, not making the tea for her supervisors in the office but making it for herself, etc.

Another interesting character is that of Dolly’s friend Shazia, played beautifully by Kubbra Sait, who lives with her at the same women’s hostel. She is a sex-worker and belongs to a minority community. She exercises each of her choices fearlessly and fiercely. Not even in one scene is she shown to have any remorse, guilt or shame for what she does (as she shouldn’t). She is even quick to call out Dolly when she uses the slur “Randi” (slut) at her sister.

This whole review would be incomplete without mentioning the stellar performances of Amol Parashar as Osman Ansari, a college student and a delivery boy and Vikrant Massey as Pradeep, one of the clients of the Red Rose companion app. Their characters induce the same emotions in the audience as is expected by the director.

There is also a small role of DJ Johnny, played by Karan Kundra, who is also Shazia’s boyfriend and Dolly’s mother, played by Neelima Azami. The role of these characters remains minimal, however, their dynamic with other characters helps in placing emotions of frustration, freedom, ambition and desire just right on the spot to carry the story forward. The choice of all the actors in the movie and their positioning is brilliant. It’s an absolute treat to watch so many talented artists together.

There is a multiplicity of topics and themes represented by the director, but no one theme is explored in depth. This leaves a sense of ambiguity. But sometimes, it’s the representation that counts. To give screen time to issues considered a taboo and shushed in our country, is an act of revolution itself. The movie is a mirror of the middle-class North Indian household placed in an extended part of the capital region. We don’t live our lives exercising one identity or role. In our everyday lives, we play diverse roles and become parts of a lot of stories, sometimes we’re part of those stories and other times, we just stand as a witness.

Dolly Kitty aur Woh Chamakte Sitaare starts with the sisters’ choices being dictated in one way or another by others. But towards the end, they reach a step closer to their journey of emancipation. The choices they make becomes their own and the agency of their choices, positioned back to themselves.

Read also:
Feminism In Olden Tamil Cinema
What Will People Say: A Personalized Review
What Does Hollywood Have Against Women?

Constantly dwindle between humour and poetry, to pave my way through life. Food, art and music truly make the everyday monotony beautiful. Academically, I'm pursuing Masters in International Studies from Symbiosis School of International Studies. I dream for my words to impact, my actions to positively change and my kindness to heal the lives around me.