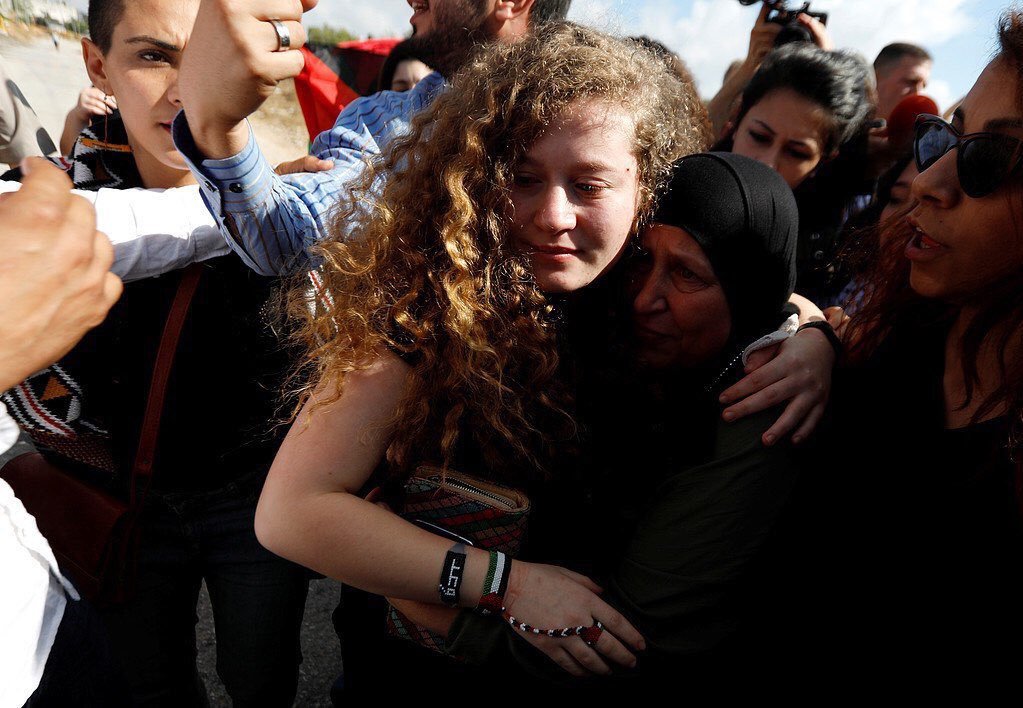 Ahed Tamimi is a 17-year old Palestinian activist from Nabi Salih who was imprisoned for eight months for slapping an Israeli soldier. She was freed and greeted by her people with a warm and heroic welcome. For those who are unaware, the Israeli Defense Forces (IDF) have been unjustly occupying and terrorizing Palestinian land and massacring the Palestinian people. Ahed Tamimi gained a lot of recognition worldwide when videos surfaced showing her fearless character and resilience in the face of adversity- a true feminist icon. Many are silenced and frightened by the Israeli Defense Forces, but she has made it a clear point that she will not stop standing up to the IDF and injustices that occur to her people.

This isn’t the first time Ahed Tamimi has courageously stood up to the IDF, and videos have surfaced showing her fighting back and standing up for her family and people from a young age (11). The IDF has tried continuously to misconstrue the facts, and silence Tamimi’s family for speaking publicly regarding the horrible living conditions and treatment Palestinians endure every day. Unfortunately, the family is constantly targeted for merely speaking out and resisting, and many of her family members have also seen jail time including her mother for filming events (now released), and brother, who is currently is serving time.

Upon Ahed Tamimi’s release, she explained in an interview that she used her time in prison to study, and will use her time to focus on her education and study international law to be able to fight the corruption and injustices from a legal position.

(Video clip below VIA @MuhammadSmiry) 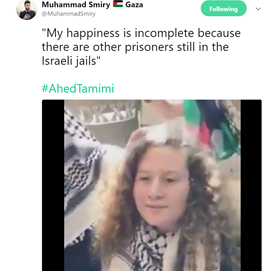 Though Ahed Tamimi is released from prison, she is sadly not completely “free.” There are a lot of restrictions a to how she may live her life, and she could be sent back to prison at any time. This shows the world that the fight is not over and the occupation still exists as Palestinians are still being killed, and many like Ahed Tamimi are still trapped in the Israeli prison systems for protesting for basic human rights.

Many of us can’t imagine being a teenager or child and having to live life under occupation, but this is a reality for Palestinians, as they suffer constantly at the hands of the IDF. On top of the reoccurring bombings that injure and kill many, the IDF is cutting electricity for ridiculous periods of time, and preventing water, food, and basic necessities to reach Palestinians forcing Palestinians to live under harsh and almost unlivable conditions.

Videos and evidence that The IDF is attempting to silence and eradicate the Palestinian people are existent and spiralling. The words of activists such as Ahed Tamimi are present to remind us that this is a reality and that Palestinians are suffering. She is a hero because she is constantly reminding the armed forces terrorizing her land, and the rest of the world that she will not be silenced or stop until her people see justice.

Below is a short clip from her press conference:
VIA Arab News: https://www.youtube.com/watch?v=6mEEK9FRelg

When Trauma Sabotages Your Relationship

How Growing Up Southern Baptist Led Me to Astrology