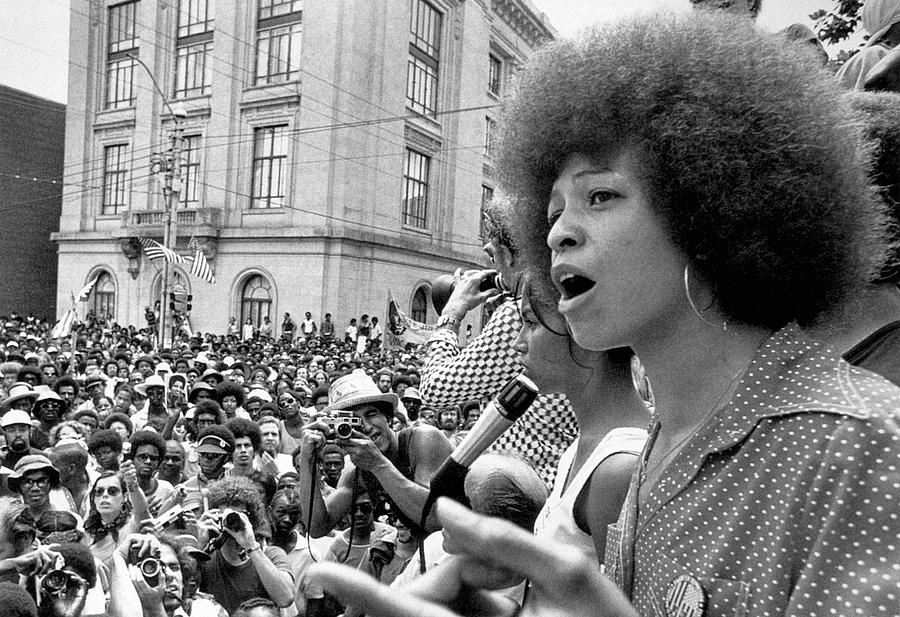 Angela Davis Speaking to Crowd. Image From For Harriet's Say It Loud: 9 Black Women in the Black Power Movement Everyone Should Know

Something that I have found comforting in the days following an incident of racial violence such as this latest act of domestic terrorism in Charlottesville, Virginia, is speaking with fellow radicals and engrossing myself in the words and writings of black, revolutionary women and femmes.

Each time I see content, whether it be print or digital, that poses such a pervasive and violent attack on my existence and the existence of my community, there are a handful of quotes from black revolutionaries that rush to the forefront of my mind.

“Nobody in the world, nobody in history, has ever gotten their freedom by appealing to the moral sense of the people who were oppressing them.”

If we as people have come to recognize that whiteness as it exists in our society is both morally bankrupt and a destructive, pervasive political identity, why would we ever look to liberate ourselves through the means of appealing to the moral sense of those who have repressed us socially, politically, and economically? Black people’s freedom will not come through appealing to the oppressor’s moral compass, as it is evident that the oppressor has none.

As activists, it is our responsibility to make materials relating to social consciousness accessible to all, to make the means of survival accessible to all, and to ensure that the torch we have been passed remains lit. In pursuit of fulfilling those responsibilities, it is not uncommon to come across people like those referenced by Harriet Tubman, those who are unaware of the fact that they are slaves. It’s usually black cishet men who argue on behalf of Kylie Jenner when she appropriates black culture or folx like those pictured below. As frustrating and saddening as it is to encounter internalized racism, it is important to make our work accessible for them as well whenever they are ready for it.

Is this guy a Nazi? He likes the Confederate flag. He has to be a white supremacist. #Charlottesville pic.twitter.com/DinRZsceN5

After the 2016 election, Van Jones, who has since then retracted his statement and been a complete disappointment, stated that the election of Donald Trump was “whitelash.” He said, “This was a whitelash against a changing country…It was whitelash against a black president in part.”

The anger of white people post-slavery, well “post-slavery,” comes from a place of resentment because of our success in this country and our resilience. We were never expected to make it across the Atlantic, never mind out of the cotton fields, to voting booths, to desegregated schools, and into 1400 Pennsylvania Avenue.

“Caring for myself is not self-indulgence, it is self-preservation, and that is an act of political warfare.”

The black womxn is taught from a very young age to be ashamed of her sexuality, to envy Eurocentric features, to view her sister as her competitor, and to become a walking doormat for others so that their shoes don’t get dirty. After Charlottesville and after the next bold move by white supremacists, it is more important than ever that we are all checking on the black womxn and femmes in our lives and that we as the backbone of this movement are taking care of ourselves. Without the black womxn, there is no revolution.

Heather Heyer: The Hero Who Perished Because We Were Ignorant

The Future Is Black & Brown. Gender Is A Social Construct. The Fall Of Capitalism Will Be Swift And Without Mercy. Hit My Pay Pal Before You Hit The Comment Section: http://PAYPAL.ME/LITERARYZEALOT. Oh, and I 100% support punching-nazis.