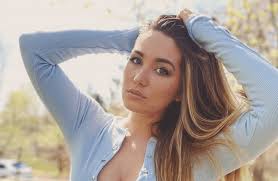 Stephanie Matto and Erika Owens were the first same-sex couple to appear on TLC’s popular television series, 90 Day Fiancé: Before the 90 Days. One would assume that Steph, Erika, and the show would receive praise. Finally, some representation! However, this didn’t occur. Viewers and participants created and engaged in a harmful narrative. This narrative focused on Stephanie and her sexuality.

There’s a lot to unpack here! *takes a deep breath* here we go!

Viewers meet Stephanie first. She describes herself as a YouTuber and influencer. Clips of videos from her YouTube channel flash across the screen. Steph also talks about suffering from a rare disease that almost killed her: aplastic anemia. She strives to raise awareness about this disease. Overall, Stephanie Matto is funny, outgoing, fun, confident, determined, strong, and beautiful. She certainly made quite an impression on many viewers.

After Steph introduces herself, viewers discover that she is in love with a woman, Erika Owens. Steph is vocal about her sexuality. She is bisexual. Stephanie makes it clear that while she dated men, she felt an attraction to women as well. She also discusses her worries and fears of coming out to her mother, a conservative, traditional woman from the Czech Republic.

Erika is bisexual, too. So, at the beginning of 90 Day Fiancé, viewers received a cute, pure bisexual love story. However, Steph resides in New York, and Erika is in Australia. The narrative began once Steph arrived in Port Augusta.

Although Steph suffers from aplastic anemia, she carefully travels to Port Augusta to be with Erika. Viewers witness their slightly awkward first meeting (aren’t they all awkward?) and their adorable hugs, giggles, and smiles toward one another. Perhaps we stan!

Okay, maybe I spoke too soon. While the meeting was awkwardly cute, things begin to shift once Stephanie and Erika are truly face to face (and alone). If only they could just hang up the phone! But this wasn’t a FaceTime call anymore.

Viewers observe some of the topics Steph and Erika discussed with one another at the beginning of their long-distance relationship. One of them being intimacy. Steph has been celibate for a few years, and therefore, takes intimacy seriously and slowly. Erika apparently knew this from many previous conversations, but the lack of intimacy becomes an issue very quickly. This was also when the harmful narrative began.

Many viewers took to social media to voice their opinions:

These viewers did not hold back with their opinions! 90 Day Fiancé viewers accuse Stephanie of being a “fake” queer woman, who creates arguments to avoid “lesbian sex.” Additionally, this all stems from Steph, a bisexual woman, having sex with men, but not with Erika, a woman.

This narrative is extremely harmful to those who identify as bisexual, because it perpetuates the belief that bisexuals aren’t real. How can bisexuals be real if they are intimate with those of the opposite sex, but not those of the same sex? Stephanie must be fake!

Erika has many friends. Her friend group is interesting, to say the least. Erika has hooked up with multiple friends, and many of them continue to hook up. However, this somewhat odd dynamic isn’t where the harmful narrative exists.

In addition, Erika’s friends are very standoffish while meeting Steph.

Steph is proof of this. She likes women more than men. However, her serious relationships were only with men. Steph discusses this more here.

So, when Erika’s friend states that Steph isn’t “that into girls,” she invalidates and erases bisexuals.

You can read more about bisexuality invalidation and erasure here.

Since Steph is a YouTuber and influencer, many fans were quick to argue that she is pretending to be bisexual for her career. Basically, her relationship with Erika only exists so she can gain more fans, popularity, and notoriety. It’s not real, and neither is her attraction to women.

This narrative is again very harmful to those in the LGBTQ+ community, particularly those who identify as bisexual. It’s harmful because it perpetuates the widespread belief that bisexuality is not an actual sexuality. It also creates a stigma for those who are bisexual.

How many times have bisexuals heard, “just choose one! You’re either gay or you’re straight!”

You can read more about Stephanie’s career and her sexuality here.

The conclusion: an end to a love story

The relationship between Stephanie Matto and Erika Owens did not last. While they are better off apart, people should have never created a harmful narrative for bisexuals.

This narrative must end for all bisexuals so they can live their truth in peace.

Steph did not want to have sex with Erika immediately, and that was her own personal choice. Steph has had more serious relationships with men than women. This does not make her a fake bisexual.

Steph fell in love. Her love just happened to be a woman. She did not use love for fame.

Steph is bisexual, comfortable, and proud of her sexuality. In the end, that’s what matters most.

Read also:
What’s Up With The Internet Invalidating Bisexuals?
The Fetishization Of Bisexuality In The Media: Why It Must Be Stopped
Bisexual Visibility: Sexuality Is Not One Size Fits All

“It’s Not Like This With Other People”: Sally Rooney’s Normal People And Rewriting Gender Stereotypes