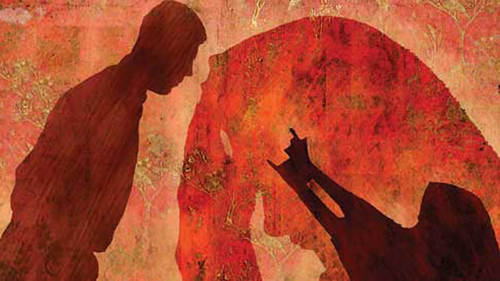 In South Asian culture, the sexualized body image and patriarchy play very important roles in labeling women as either good or bad. First of all, in regards to the patriarchy, men dictate the will of women and treat them as property. When women step outside their homes against the will of their male counterparts, even when their only motivation is to earn a living, they deserve to be punished for a man’s honor resides within the body of his women. Hence, when a man decapitated his wife in Lahore in name of honor, our sick society tried to justify it by blaming the victim for not bending to his commands and indirectly questioning his honor. 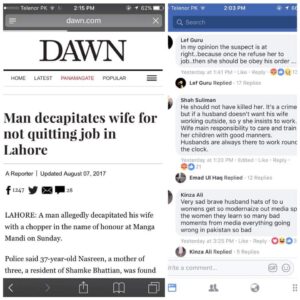 A brutal murder was justified in name of honor. Even when the people who have these kinds of opinions don’t involve in such heinous crimes themselves, they do involve in strengthening the stereotypes related to ‘bad woman’ and normalizing patriarchal violence and supporting its perpetrators.

Secondly, a woman who hangs out with her male friends is considered to have a loose character and deserves to be punished according to toxic masculinity standards. So, when a girl was caught hanging out with her male friend in a park in broad daylight in Islamabad, she was separated from her friend and verbally abused and raped by CDA officials who became self-proclaimed moral police at the moment and decided to “teach her a lesson.”

Many people in our society are of the opinion that women should not have male friends let alone hang out with such friends. So if such a crime happens, only women are to be blamed for they tried to break a moral norm. This explains the normal and acceptable portrayal of toxic masculinity in public spaces. On the flip side, a woman’s body is sexualized to such an extent that its existence in public without a strong male body is considered to be meatloaf which can be easily preyed upon without consent.

Similarly, when Reham Khan was publicly harassed at London Park, most of the people were of the opinion that she deserved it because of her bad reputation. A popular youtube star Zaid Ali not only said that her comments on Imran Khan were the result of intake of drugs but also went on to insult gender equality and blamed women for often using the ‘female card.’ This recent tweet has resulted in producing thousands of ‘Reham-hating’ and particularly ‘feminism-hating’ comments. Same goes for Meesha Shafi case where her allegation is dismissed by the public just because she is an independent and bold woman.

We need to understand that being independent and bold does not automatically turn women into liars and ‘bad women.’ In a society where thousands of horrendous crimes happen against women every day and where women representation is reduced only to a quota, such misogynistic and ‘feminism-hating’ comments only serve to strengthen the victim-blaming discourse that a ‘bad woman’ always deserves public shaming and violence. This in turn only serves to turn attention away from men and their irresponsible behaviors. While bashing Reham Khan, nobody is ready to criticize Imran Khan for his anti-feminism and pro-domestic violence remarks. While bashing Meesha, nobody is ready to listen to those 7 other women who have also come out with allegations against Ali Zafar. If such a trend continues, we can simply forget that we can freely speak up against gender-based violence let alone speak up for gender equality. Maybe we need to rethink the definition of a ‘bad woman’ along with coming up with a new definition of a ‘bad man.’