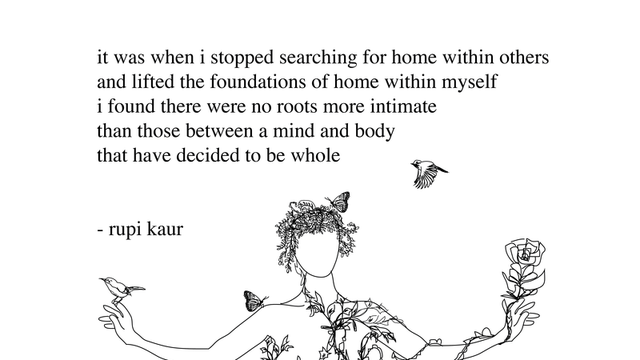 If you or anyone you know is suffering from an eating disorder you can text NEDA to 741741 or call the National Eating Disorders Association Helpline at 1-800-931-2237.

When I entered high school, I thought I was comfortable with who I was. As a child coming from a neglectful household, I had no idea yet that I stood out in school. Among the pressure at school and the abuse of my parents, I became ashamed of my body. What I had once not cared about became the only thing on my mind, taking my attention away from everything I had loved.

I was track captain and ran farther than my teammates and was built like a runner, but if you weren’t “skinny,” you weren’t pretty. Self doubt and humiliation overtook me and I began “dieting” which led to not eating at all. I wound up losing enough weight that you could see my ribs and how I was shaking from hunger. My body decided it couldn’t deal with my actions anymore, and I became furiously anemic to the point I would have had to have been hospitalized. Afterwards, I hated my body no less, but I was hurting it no longer. Instead of not eating, I wore baggy clothing to hide my body. I dressed in neutrals and clothes with no prints to try and hide as best I could.

The kicker was – no one realized my illness. They either made jokes on how little I ate (“you’re like a bird”), jokes when I did eat (“a moment on the lips, a lifetime on the hips”), encouraged my new weight loss, or ignored me. There was no red flag waving above my head, and no one to tell me to straighten out. It was an invisible illness that I lived with and it’s invisibility made it so much harder to treat.

This would not be the end of my story, though.

When it seemed all was lost for me, I found poetry.

Rupi Kaur and Amanda Lovelace spoke words of love and encouragement into my wanting ears, and slowly, I realized the only love I had missing from my life was my own.

I didn’t WANT to hate my body but I felt I had to live up to the size zero image.

So, I stopped looking at those tiny-waisted models and instead found people who were considered beautiful and “big.” I decided it was them I wanted to model after. Jennifer Lawrence, Demi Lovato, Melissa McCarthy, and Adele became my idols. Strong, independent women, with a voice no one could overshadow. All considered “big” for Hollywood yet all of them healthy.

It was healthy I sought afte r- a health that transcended just physical health but emotional and mental health. I was only going to get better if I hit EVERY front. I found a way to eat a better meal and made it my mission to be the best version I could be. I woke up and told myself, “you’re beautiful the way you are” every morning until I really believed it (fake it ’till you make it,as they say). I convinced myself slowly that I was enough.

Now, I am more than happy with myself. Yes, I have setbacks, it’s a slow and ongoing work, but I don’t care anymore about others. I find myself beautiful and if you don’t you do not deserve me. This work I’ve done is wholly liberating and I wish for anyone reading this who is going through this or wants help to reach out.

I’m never going to starve myself for a part . . . I don’t want little girls to be like, ‘Oh, I want to look like Katniss, so I’m going to skip dinner.’ That’s something I was really conscious of during training, when you’re trying to get your body to look exactly right. I was trying to get my body to look fit and strong—not thin and underfed.

5 Reasons Why You SHOULD Date Indian Girls 14784