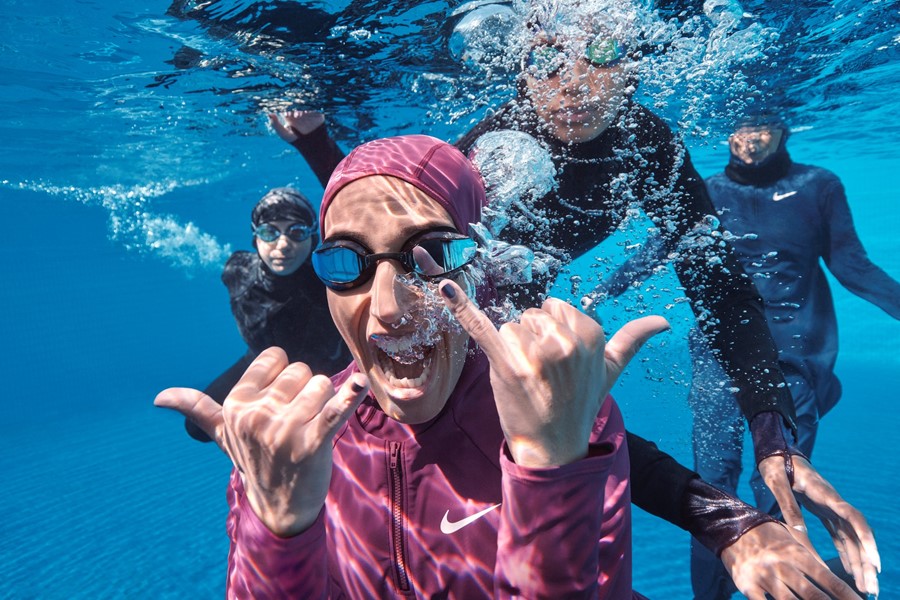 When I first started wearing the hijab as a young teen, I knew I would spend the rest of my life dealing with ignorance. I never imagined that it would affect or limit my love for sports. At thirteen maintaining modesty was not a priority for me, but I felt uncomfortable with my body as do most teenagers at that age, and whilst other girls around me didn’t fret over their hair, or body as much as I did, I dreaded being so exposed. Swimming caps weren’t always useful, and makeshift DIY swimsuits drew too much unwanted attention. A tunic length t-shirt with waterproof spandex leggings soaked with water, clinging to your thighs is about as uncomfortable as you can imagine. Even if it was just girls surrounding me, I felt self-conscious and constantly embarrassed. Nike’s hijab swimsuit would have been a blessing to thirteen-year-old me, and I can’t imagine what it would do for Muslim athletes now.

Swimsuit shopping has a different meaning for every person. For Muslim women, wearing the hijab means dressing with a degree of coverage that is at odds with the swimwear industry bikini or one-piece norm. This is why Muslim athletes have long been disregarded by the athletic wear industry, as adequate performance gear that is both modest and suitable for sports is hardly accessible. Nike’s modest swimwear collection is both chic, stylish and functional. The $600 dubbed Victory suit consists of a loose tunic-cum hoodie with an attached hijab, coupled with high waisted waterproof leggings.  The fabric is designed to be breathable and lightweight with UPF40+ sun protection. The Victory swimwear is certainly a significant improvement in modest swimwear.

It is not the first time Nike has shown interest in designing modest wear for the large demographic of Muslim women who engage in sports. The modest swimwear collection comes just after two years after the sporting moguls released their Nike Pro Hijab featuring Olympian fencer Ibtihaj Muhammad, and just after four months before a viral twitter video showed a women’s football game disrupted after a young girl pauses to adjust her lose hijab. Visible Muslim women have often faced judgment and indignation from people for how they dress. In October, a high school cross-country runner in Ohio, Noor Alexandria Abukaram was disqualified for her hijab. Despite her skills, a hopeful, young athlete was alienated simply for daring to wear a hijab. Up until 2017, the Basketball Federation did not allow athletes to wear religious headgear, and only ratified this ban recently.

Despite the hijab and modest swimwear such as the burkini being inherently politicised in countries such as France, where women are policed for wearing one, Nike celebrates this change with the launch of the hijab swimsuit. With the French retailer Declathon pulling back on selling the sports hijab, and the countries ban on the burkini, Nike’s Victory swim is a reminder that women should be given the choice to participate in sports wearing what they choose to.

Nike’s leap into modest swimwear is an encouraging statement to many of us, coming from a multi-national brand that is actively embracing diversity and inclusivity. For years we struggled with maintaining our modesty, whilst simultaneously partaking in sporting activities. Nike’s Victory Swim just may have ended that struggle.

The absence of a cool and functional modest swimwear has been the barrier to swimming in my life, and to many women that I know. But will Nike’s swimwear change the attitude of this rampant anti-Muslim hate that causes young Muslim girls to avoid public swimming pools or partaking in sporting competitions? They care very little for what expensive logo you are wearing, or the confidence you display. We have made progression in modest swimwear, and being inclusive, but is it all for nothing if visibly Muslim women have no safe space.