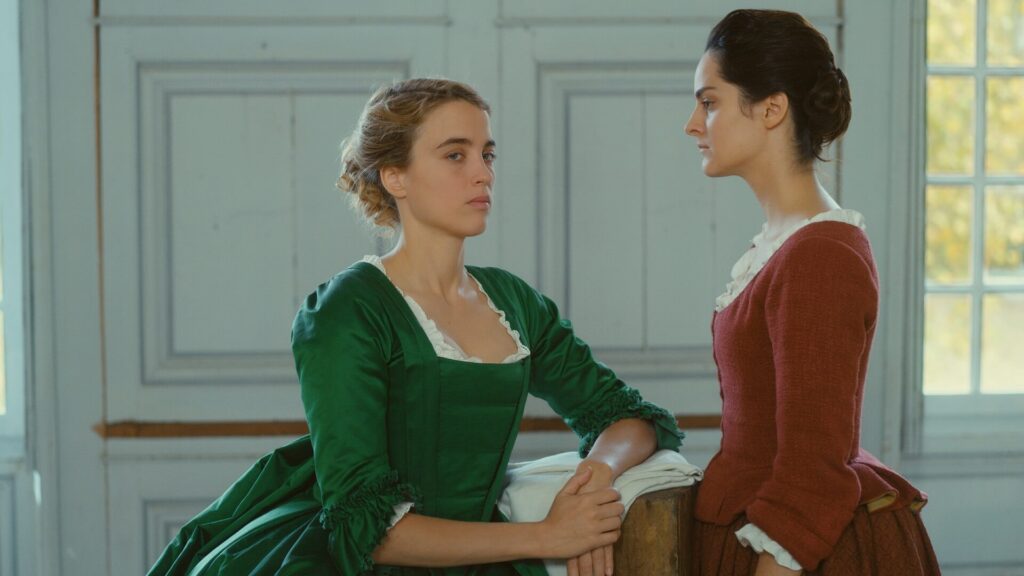 The first time I ever watched a film that wasn’t a stereotypically heterosexual romance was back in 2014. Like a lot of Gen Z sapphics, it was – regrettably – Blue is the Warmest Colour. At the time, I just wanted to lap up the fact that I was watching two women kiss on my laptop screen, I wasn’t troubled then by the very obvious biphobic undertones of having the bisexual woman, rather than her lesbian partner, cheat in the relationship with a man or the fact that there is a 9-minute long sex scene right in the middle of the film that lingers uncomfortably on the actresses rather than creating a space that’s emotionally charged.

And this hasn’t changed over time. I’ve seen an array of wlw cinema at this point (although let’s be honest, the selection is abysmal) – whether it’s the alright Princess Syd, the actually quite enjoyable Appropriate Behaviour or the extremely-and-uncomfortably pornographic Below Her Mouth, all of these films have one thing in common: they don’t look at women the way that women look at women. That is, almost polarly opposite to the way that men look at women. However, all of the male-gaze-y downfalls of sapphic cinema seem to be forgotten upon viewing what I’m going to call the best piece of lesbian cinema ever made (sorry, Carol) – Portrait of a Lady on Fire.

First of all, the casting of Marianne and Heloise – at least from a purely aesthetic point of view – was perfection. It may seem contradictory to point out the importance of a woman’s looks when addressing the feminist subtext of a film, but in the case of Portrait, it contributed to the beautifully femme-centric space of the film as a whole. Instead of uncomfortable zooming shots on the exposed intimate areas of the female body, Portrait gave us lingering shots of crooked noses, weather-beaten hands, napes of necks, faces pointed towards the sea. It let us look at women in the gently innocent ways that sexualised lesbian cinema scarcely lets us. This isn’t to say that women don’t look at other women in a sexual manner – of course, we do, that’s kind of the point of having a wlw identity. But we can also look at women in a way that is free from the objectifying constraints of the male gaze, and Portrait acknowledged this fully and led us through the stages of the type of feminine ‘looking’ that eventually leads to loving. And after years of feeling absolutely nothing upon seeing aggressively intrusive shots on women’s chests and behinds that was so obviously directed by a ridiculously horny man who had a penchant for lesbian fetishization on screen, the gaze in this film made me, and my ways of seeing, feel seen.

Keeping on the topic of women’s bodies within Portrait, I almost stood up on my hair and cheered upon seeing that women’s bodies in this film were natural and free from the airbrushing and preening that is usually seen as necessary in films where the female form is put on display. Now, this isn’t to say that there is anything wrong with surgically altered bodies, edited bodies or shaved bodies – women have the choice to change their body, and personal choice is, of course, an important factor in what makes people feel ‘good’ or ‘included’ in our society which dictates that women must be smooth and ‘perfect’, whatever that means.

But Portrait denied the male gaze access to our feminine space once again, and instead offered us what can only be described as glorious body hair, acres of the stuff, unpreened and on display. And not only that, but it showed it appreciated in an intimate manner: it’s on display during the intimate endeavours of Marianne and Heloise, and it is actively appreciated as Marianna rubs opioid-laced ointment into Heloise’s underarm hair before descending into a sleepy, giggle-heavy night under the crisp white sheets. Body hair in Portrait isn’t just hair – it’s an active homage to the appreciation of the female form that so many women have for other women that we can never truly see and appreciate because the male gaze dictates a world where women are forced to change themselves to suit the appeal and directions of men.

Aside from body hair, Portrait covers a range of womxn-centric taboos unflinchingly. Marianne wakes up in the middle of the night and discovers she’s started menstruating, and Sophie fetches her a warm cloth. We see Marianna in pain, hunched over from cramps. She isn’t pretty, she isn’t delicate, she’s bleeding and writhing in pain apologetically – the way that everyone who has a period is familiar with, and in a way that isn’t shy or turns its back on the idea of portraying women as anything other than ‘clean’ and free from the ‘unclean’ connotations of bodily taboos. Also, Sophie is forced to have an abortion at one point due to having an unplanned pregnancy.

After visiting a group of witches (yes, this film has witches too – I told you it’s perfect) who treat her with love and care, Marianne and Heloise assist her in the final stages of preventing her pregnancy from continuing. Upon seeing Marianne turn her face away, Heloise simply tells her to ‘look’ instead of fearing seeing Sophie in such a vulnerable state. A simple gesture, but one that definitely encourages the viewer to question why they are so unwilling to look away from the harrowing events which so many women have to go through. Looking, it seems, is not just required in a loving, intimate context – we must look women’s pain and suffering in the face, even if it goes against the ‘delicate’ idea of womanhood that the patriarchy has imposed on us for so long.

Finally, the island which Portrait is set on is exclusively filled with women. Whether or not this pays homage to the roots of Sappho of Lesbos herself, it certainly establishes a much-needed space for womxn that is almost never seen in cinema – even wlw cinema is often dominated by male plot-drivers and focuses on their desires rather than the women are the forefront of the film. Also, the more intimate scenes of the film are almost non-existent – sex between women remains a literal mystery, and the minds of the viewer is forced to imagine what goes on rather than explicitly showing it.

This, in the context of the female gaze of the film, almost feels like a protest against the way that lesbian sexual acts are viewed in society – they are scrutinised, questioned if they’re “real sex”, drooled over by those who fetishize wlw, made into grotesque porn sub-categories dominated by male wants rather than female pleasure. Therefore, Portrait’s denial of this felt like it was keeping women loving women to the minds of women who know how sapphic eroticism works. And we don’t need to let men view this or contemplate this, and Portrait lets its lovers experience their sexuality free from the gaze of male audience members. And that’s what sexual empowerment on-screen feels and looks like.

Overall, Portrait of a Lady on Fire is absolutely a masterpiece and should absolutely be the baseline for wlw cinema – from the female gaze deployed, to the natural beauty of the women, to the witches, to its unflinching gaze on female bodies, it encapsulates not only what it’s like to be a woman, but what it means to be a woman who loves women in a way that is beautiful, natural and safely sexual without being aggressively maculated. So, thank you Céline Sciamma – and thank you for bringing attention to the fact that we really, really need more {gay, bisexual, queer} womxn in the arts, in film, and in literature to cater to other womxn and their visual and artistic wants and needs.