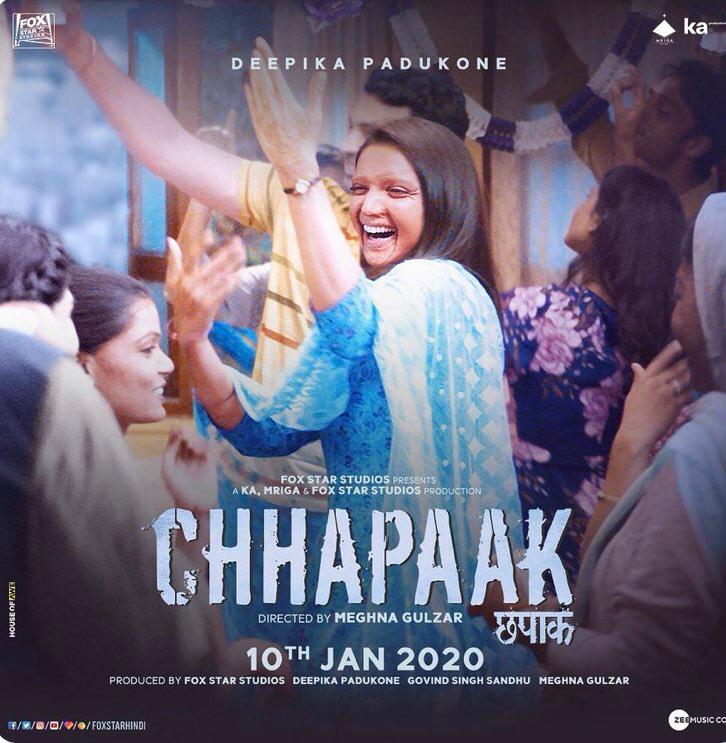 What Chhapaak gets right

Over recent years, South Asian cinema has been exploring with new modes of storytelling. Although the long-standing tradition of adhering to the hero-centric masala genre films continue to be a feature of many mainstream films, there has also been a greater exploration of female-oriented and female-centric films which have received a positive reception. This particular focus on exploring the stories and experiences of women in South Asian cinema can be attributed to a variety of reasons such as an increased awareness of women’s issues, the rise of the global Me Too movement, entry of women in the domains of direction and production as well as the changing tastes and preferences of audiences themselves. Such films, despite the occasional criticism of being labelled as ‘pseudo-feminist’ films that lack much substance or depth, have been extremely important in evoking conversations and discussions on many of the problems that South Asian women face.

Amongst these, the recent Hindi film Chhapaak (Splash) which was released on 10 January has generated immense buzz amongst audiences. The film directed by Meghna Gulzar starring Deepika Padukone and Vikrant Massey tackles on the long-standing problem of acid attacks on women in India. The film is largely based on the experiences of Laxmi Agarwal, an acid attack survivor herself, who has been extremely vocal in raising awareness on this horrific crime as well as its implications on women in society. She has also been active in raising public awareness on the kinds of discrimination and prejudice acid attack survivors continue to face in society. Laxmi was only 15 when she was brutally attacked after she had refused a marriage proposal by a 32-year old man in 2005. She had to undergo a series of painful and intensive operations. In 2006, she filed a Public Interest Litigation in the Supreme Court calling for a complete ban on the sale of acid. After a long struggle, in 2013, the Supreme Court responded to this and imposed restrictions on the sale of acid.

A Much Needed Lesson On Reality

Many of us have some sense of awareness of acid attacks against women in India. We often hear about it in the news and media. There are many reasons why such attacks occur. Some examples include refusing the advances of interested suitors, choosing to pursue higher education, taking on jobs, or wanting to seek a divorce from an unhappy marriage. While the reasons may vary, the underlying cause for such attacks to occur lay in the unwillingness of women to adhere to a certain code of conduct and behaviour that are patriarchal in nature. Acid attacks are chosen as a form of fitting punishment as they have the ability to permanently scare the faces of women. This would serve as a constant reminder of their ‘mistakes’. In Chhapaak, Malti, a 19-year old aspiring singer gets attacked by a family friend Basheer Khan, a 32-year-old tailor, after she refuses his proposal for marriage. Apart from highlighting her physical and psychological struggles, the film also presents an outlook of the limitations in the legal landscape to seek justice before 2013. For example, the film shows how before 2013, there were no separate punishments or laws on acid attacks. It was only after 2013, that under the Criminal Law (Amendment) Act, section 326A was introduced that specifically focused on voluntary grievous hurt by use of acid. Under this law, those who buy acids are required to present a photo verification when they make a purchase. However, while this looks like a good solution on paper, in reality, it is difficult to monitor and enforce. The film itself highlights this when an NGO member goes to purchase a bottle of acid for merely 30 rupees from a nearby stall. The store owner does not bother asking for any form of verification or the purpose of his purchase. This is indeed the unfortunate reality in many parts of India. This also raises the question of is championing for legislative changes enough to bring about an end to such horrific crimes given the multiple loopholes and lack of responsibility among the public.

Using Silence As A Form Of Strength

Having watched multiple South Asian women-oriented and female-centric films, Chhapaak can be said to have diverged greatly in the portrayal of the female characters. Typically, many of such empowerment themed films tend to feature overtly lengthy, fiery and sentimental dialogues that highlight the anguish and plight of the female characters. Such dialogues often become very popular and are shared extensively on social media. However, in Chapaak, the strength of Malti and others like her lay in their silence. Despite the multiple opportunities presented to Malti and her friends to capitalise on to project their grievances, Gulzar chooses to invoke silence. For example, during a visit to the convenience store, Malti reads out a string of comments posted by members online on the NGO’s page that she is working for. As she excitedly reads the comments which applaud the strengths and courage of the acid attack survivors, she also read out a comment which says “these girls look like freaks.” She and her friend immediately become silent for a while, taking in the weight of the comment as well as being reminded of their reality. They do not attempt to console one another nor retaliate to the comment. The silence that is shared by the two acid attack survivors implies how the everyday struggles and anguish of such survivors cannot be narrated nor felt by those who have not experienced it. Similarly, throughout the entire trial, we do not hear Malti’s voice in the courtroom. She is seen in the background, sitting with her family as she silently fights to ensure that her attacker received a just punishment. Malti’s occasional silence in such moments brings out the idea of how her struggles are one that cannot be said but only felt.

More often than not, when women undergo physical or sexual violence, they are in some ways blamed for allowing the violence to happen to them. For example, if a woman gets raped or assaulted, she is usually blamed for allowing it to happen because of her provocative dressing or behaviour. Take the case of Nirbhaya who was brutally gang-raped in 2012. The defence lawyer representing her rapists had openly said that “Everyone is responsible for their own safety. If someone roams around irresponsibly then they have only themselves to blame if something bad happens to them“, As such, when it comes to violence enacted against women, there has been this deep-rooted idea that such violence happens because women allow them to happen. As a result, they are justified. In Chhapaak, when the police carry out an investigation to identify the culprit behind Malti’s attack, they inspect her mobile phone. During this, they uncover a series of boys’ names in her phone. A female police officer questions the need for Malti, who was studying in an all-female school to have so many boys’ names stored in her phone as if hinting that the attack on her was inevitable after all given how she had so many male friends. This ‘she-asked-for-it’ moment was thankfully short-lived after Malti’s lawyer questions the relevance of her male friendships and the attacks on her. In addition to this, there is no focus on the reason for Basheer Shaik and his female accomplice’s (came as a shock) attack on Malti until the latter half of the film, signalling that the reason for such violence is not important. By focusing on the violence rather than the reason for the attack, Chaapak crushes any attempts to justify or understand the viewpoints of the attacker.

What Chhapaak does significantly well is also to erase the victimisation of acid attack survivors. While this is a given how the word survivors instead of victims are used throughout the film, there are also other ways that Gulzar has tried to highlight this. This can be seen from the way Malti and her friends try to move on with their lives by extending their support and help to others like them. Malti continues to wear her favourite clothing and accessories. She continues to sing, dance and celebrate the tiny wins in her fight for the ban of acid. More importantly, she continues to be unapologetic for who she is.

During one instance, while she celebrates over a new law in favour of acid attack survivors, Amol who had been fighting for the complete ban of acid chides her for being so easily satisfied, painting Malti as being irresponsible a and perhaps ignorant. Malti however, casually tells him that she will celebrate as much as she wants because she wants to. Activism is not an easy journey. It is one that is mentally, physically and financially tiring which could probably explain Amol’s impatient and cynical attitude.

Malti’s statement reminds audiences how survivors like her are not sad, depressed or angry figures. Life is not only complete after they win their fight completely, like in the case of Malti, her court case. Rather, life is about celebrating even the tiniest moments and wins. It is certainly heartening to see that for most parts of the film, Malti and her friends are presented as being happy and carefree even after their attacks, a testament to show that life does go on.

At the end of the film, while I felt a sense of anger, disappointment and unjust over what Malti and others like her had to endure, I did not at the very least feel any sense of pity for her. If any, Malti’s narration left me with a sense of surprise and admiration of how Malti and her friends have been able to rise up against their adversities and create an identity for themselves which is the film’s biggest plus point.

While the film did have certain minor setbacks such as the lack of adequate credit for the lawyers who fought the case with her as well as updates on life after the court case, Chhapaak can still be regarded as a much needed and important film that invites conversations on the topics of masculinity, violence and rehabilitation. A common criticism is that the film feels incomplete. Perhaps Gulzar chooses to leave it as such because of the fact that despite the tougher punishments and regulations, acid continues to be readily available to the public. As a result, acid attacks continue to happen frequently, affecting the lives of many women.

5 Reasons Why You SHOULD Date Indian Girls 14687