Here is something you already know.

Women are underrepresented in STEM. And in order to be represented, you first need to be hired.

The categories rated male and female applicants on: “Competence,” “Hireability,” and “Mentoring.” Men received higher marks in all three categories.

In the analysis, the study’s writers wrote: “To the extent that faculty gender bias impedes women’s full participation in science, it may undercut not only academic meritocracy but also the expansion of the scientific workforce needed for the next decade’s advancement of national competitiveness.”

In fairness, it’s important to note that since 2012, many companies have kick-started initiatives to hire more women and POC in STEM programs and positions.

More devastated by a lack of representation are Women of Color. About 9% of STEM employees who identify as Black and about 7% of those who identify as Hispanic Latinx work in STEM positions, according to the PEW Research Center.

Dr. Linda Schiebinger, professor of History of Science at Stanford, has some ideas of how the ugly gender gap implemented itself. She has designed a plan to mend gender roles in research, technology, healthcare, that lay under the umbrella of science.

In this TED Talk, Dr. Schiebinger introduces “Gendered Innovations,” reciting research figures and reinstating the program’s initiative. The program calls for the implementation of strategies to include analysis of gender roles and needs in science to include women (and, in turn, their participation in the sciences).

The Youtube comments on the TED Talk are also relevant. These comments heavily include male usernames poking fun at Schiebinger’s credibility and the topic of gender studies at hand. “This is why the world is falling apart,” writes John Q. One woman’s comment expresses her interest and excitement following the lecture. Perhaps these comments serve as a small bit of evidence, or even a microcosm, for the way that women in STEM are treated culturally.

Now, what do “Underlying Biases” have to do with a lack of representation in STEM?

And, the hardest to uproot and identify, the core of the least tangible problem:

Women in the world can, and many will, tell you that our lives are steered by societal constructs. You will learn in a 100-level course of college sociology, anthropology, or gender and women’s studies that primary-level classrooms show bias for the female association to arts and language, and for the male association to math and science. We can examine the transition from the original, scientific terminology of “mankind,” later changed to the inclusive “humankind,” or the traditional and historical connection of the woman to nature rather than technology (and not in a scientific way).

Our own biases and societal attitudes are important to examine. People in the world are sexist, just as there are people who are discriminatory toward any minority group. Conversations are necessary to uproot bias and level the field in STEM, just as they are for each field.

Aside from societal attitudes, there are current systems of scientific advancement that are currently implementing sexism through technology.

An example listed by Dr. Schiebinger is Google Translate and its predisposition to male pronouns when translating languages. A common rebuttal by Google for the default to masculine pronouns is the fact that “he/him” pronouns are simply more prevalent on the web. Here is a graphic showing the expression of gendered pronouns in books.

The only pronouns represented are (she/he), and unfortunately, this graphic does not include the pronouns of nonbinary or otherwise identifying persons. 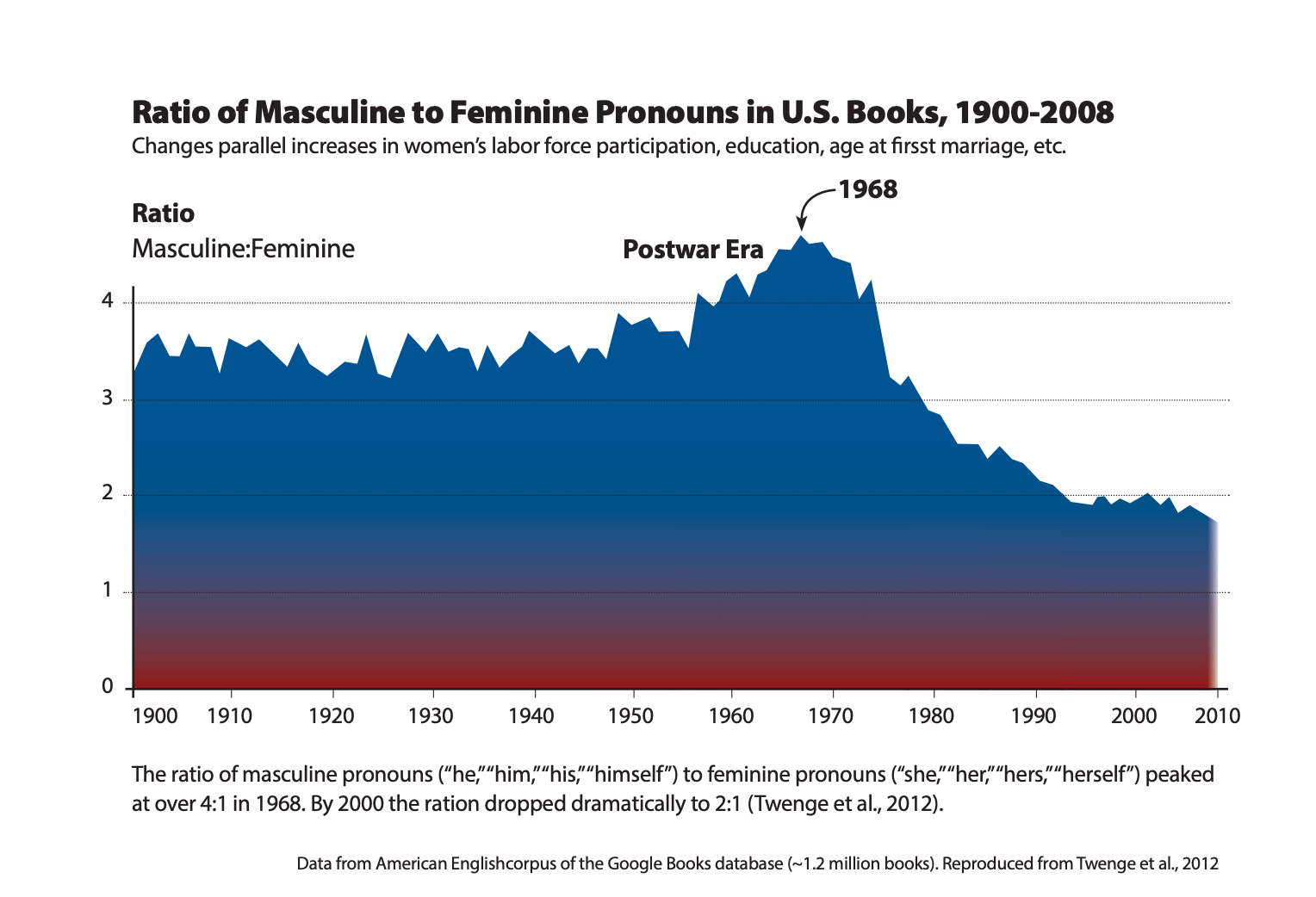 Over time, the ratio has improved, though it was last recorded that masculine pronouns appear in US books about 2x more often than feminine pronouns. The improvement of this ratio directly correlates to women’s movements over time.

Schiebinger argues that through this error on the part of Google Translate to default to masculine pronouns because these pronouns circulate more often on the internet, the work that women’s movements have done in society to create a more (but only about halfway to fully) equal representation in types of media, has been erased in a way.

Less than 10% of all biographies on Wikipedia are about women. Dr. Schiebinger argues that this number may even be as low as 3%.

An internal study found that 10% of editors at the site are female. We already examined how many women work at Google compared to men. Could these errors have to do with an culture in technology that perpetrates the lack of female representation in these two popular tech companies?

It could also be concluded that the way the internet expresses pronouns and representation is a reflection of the world that uses it.

This was the response that Amazon’s Alexa used to give when prompted with being called a sexist and derogatory profanity. The company has altered it since. But this response also prompted the “I’d Blush If I Could” Report, by Unesco, which analyzes sexism prevalent in artificial intelligence, which also aimed to improve gender stratification in learning digital skills.

You won’t need a report to figure out why tech companies decided to market Artificial Intelligence Helpers (Siri, Alexa, Google Home, and Microsoft Cortana) with default female voices, which perpetrates the stereotype of women as assistants.

The New York Times described the voice of these popular AI devices as “having a ‘submissive or even flirtatious style.’”

When you ask Alexa, “What are the symptoms of a heart attack?”, she will respond, “chest pain, shortness of breath, feeling weak and/ or lightheaded.” The issue here is that heart attack symptoms for women are more commonly associated with back and jaw pain.

According to The American Heart Association, the top cause of death for women in the US is cardiovascular disease. Women have also consistently suffered from more heart attacks than men since 1984. Here, we see a clear, and life-threatening, need for gender consideration in healthcare.

According to Schiebinger, of ten dangerous drugs recently banned from the pharmaceutical market, eight were more harmful toward women’s bodies. There are gaps in knowledge and even consideration for gender in pharmaceutical research shows a study done by Global Health Action. Data expressed a lack of gender study in the research phases of 85.7% of drugs studied.

Healthcare providers did not treat both genders with equal gravity in response to bodily pain. Women were more likely than men to see a general practitioner rather than a specialist after reporting pain.

Something also notable to think about is the gender role implementation of doctors vs. nurses.

Recognize that this is all connected.

Gendered Innovations calls for a reconsideration of how gender expresses itself under the umbrella of science. Whether that be computer science, tech development, healthcare, or actively working in a laboratory position, each area is relevant.

The statistics of the underrepresentation of minority groups which include women in STEM are not new. Neither are our examinations of societal expression of gender bias.

A connection must be made between the values of science companies and industries and their treatment of women with the disparity in employment rates at these same companies.

Read also:
The Influence Of Media
The Cycle Of Capitalism And The Tech Industry
Too Few Women In Tech And Too Many Forced To Leave