Sharmadean Reid MBE is the founder and CEO of WAH Nails, a beauty empire based in London. WAH started in 2005 as a zine focusing on street culture and feminism. It then developed into a blog and WAH power lunches; an opportunity for women to come together to discuss ideas and careers. In August 2009, the first WAH nail salon was opened, driven by the concept of a place for women to “hang out, form friendships and build communities.” Now, their main salon is in Soho, London and a WAH line of nail products is available to buy at many retailers. Since opening in 2009, WAH and Sharmadean Reid have world recognition and have renovated the beauty landscape and the concept behind that, while pushing forward how impactful feminism and feminist ideas really can be.

Born into a Jamaican family in 1984, in Wolverhampton, Reid has been very vocal on the different hurdles that can stand in the way of success form women. One, for example, is the childcare system in the UK; when speaking to Refinery29 she said,

Childcare is such a massive barrier for economic progress in this country. It’s not, like, just for women to be able to go and do what they want, the whole country would benefit if there was more childcare. Currently, between the ages of 0-3, there’s no childcare, so if a woman was to go back to work after maternity leave of a year, they’ve got two whole years of paying for childcare which means actually it’s not beneficial to go back to work because it’s full-time childcare which is essentially a full-time salary. 2 years! And then when they’re 3 you get 15 hours free and then when they’re 5 you go to school but then school starts at 9am. Unless you work a 10am-2pm job it’s impossible. It’s unfathomable to me. It’s been tough but it makes me think a lot about women’s policy.

Sharmadean Reid has also founded FutureGirlCorp, which aim to inspire the next generation of female CEOs. Its mission statement being, 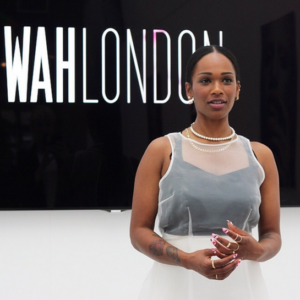 Since starting WAH, Sharmadean Reid has achieved a wealth of recognition. For example, in June 2009, The Independent recognized Reid as one of the “15 people who will define the future of arts in Britain” and in 2015 Reid was awarded an MBE (Member of the Order of the British Empire) for her services to the nail and beauty industry.

I admire Shamadean Reid extensively for her brilliant and realistic message of empowerment, I recommend watching this feature on WAH nails and Reid which portrays her innovative ideas so well!