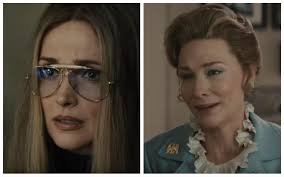 Thursday, January 9, 2020 FX released the season 1 trailer of the limited series, Mrs. America. Immediately upon release, viewers began voicing their approval. This series may possibly be a must-watch for 2020. Here is what you need to know.

Mrs. America features an all-star cast. Cate Blanchett, Rose Byrne, Uzo Aduba, Elizabeth Banks, and Sarah Paulson join forces to tell the story of the Women’s Liberation Movement, the rise of the second wave of feminism, and the woman who opposed it all. This significant time in history will be told through the eyes of Gloria Steinem, Betty Friedan, Shirley Chisholm, Bella Abzug and Jill Ruckelshaus – the second-wave feminists of the era. Viewers will also see the opposing perspective through the eyes of radical conservative, Phyllis Schlafly.

Cate Blanchett will star as Phyllis Schlafly. Phyllis Schlafly, who passed in 2016, was a radical conservative who supported anti-feminism, opposed abortion and same-sex marriage, and successfully campaigned against the ratification of the Equal Rights Amendment (originally written by Alice Paul). Schlafly believed that motherhood is crucial to the well being of society, and “the Positive Woman looks upon her femaleness and her fertility as part of her purpose, her potential, and her power.” Therefore, there was no need for feminists, their cause, or women who didn’t want to be mothers.

Rose Byrne will star as American feminist, journalist, social-political activist, and co-founder of Ms. Magazine, Gloria Steinem. Gloria Steinem quickly became known as one of the leaders and spokeswoman for the American feminist movement in the late 1960s and early 1970s. She’s a symbol of the women’s movement. Steinem fought, and continues to fight, for equality and countless other causes. She has also been a supporter of same-sex marriage and transgender rights. Today, Steinem lectures on a variety of topics involving feminism. According to Steinem, “the truth will set you free, but first, it will piss you off.”

Uzo Aduba will star as “unbought and unbossed,” Shirley Chisholm. Shirley Chisholm made history as the first African-American candidate to run for president from a national political party when she launched her unprecedented campaign in 1972. She was also an educator, an author, and certainly one of the most inspiring women in history.

All in all, this show looks amazing! You can watch the trailer here

Mrs. America will premiere on April 15 on FX and Hulu.