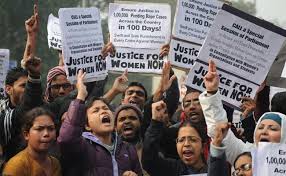 The Thomas Reuters Foundation conducted a survey in 2018 and labeled India as the most dangerous place for a woman, above war-torn Afghanistan and Syria with the US being the 10th. India is even above the notoriously sexist Saudi Arabia.

India ranked the worst in terms of the risks women face from sexual violence and harassment, from cultural practices, and from human trafficking including forced labour, sex slavery, and domestic servitude.

Without generalising, because this is of course not true to all men in India but a consensus seems to be that there is a fundamental problem in India due to men’s view of women, a structural sexism that is upheld by some cultural practices e.g. the practice of “dowry” and the way in which men are raised to see women as inferior.

It has been more than  5 years since the famous ‘India’s daughter’ crime where 23-year-old Jyoti Singh was brutally raped and murdered and since then there have been promises to address violence against women in India, although many have said there has been little, if any changes, with increasing crimes against women, with around 100 cases of sexual assault are reported to police every day in India.

The documentary that followed called ‘India’s Daughter’ (now on Netflix UK)  left the world shocked at the view towards women that the rapists had. They didn’t see it as crime, saying that her rape was just as much her fault, praising their culture for the subordinate role women hold. It seems there is a fundamental problem in the way women are perceived and not respected by some men which is why India is seen as the most dangerous place for women. When interviewed, many Indian women blamed this inherent sexism which leads to sexual assault due to a fundamental misogyny.

India also has the most child-brides in the world, with around a 1/3 of girls married before their eighteenth birthdays, female infanticide is also still rife with rural villages and a lack of enforcement a lot of misconduct occurs behind ‘closed doors’ without officials knowing.

Women have taken it upon themselves to protest against the lack of safety and the lack of affirmative action with protests in April. Famously, Sri Reddy, a South Indian actress, stripped half-naked and walked to government official buildings in a #metoo inspired protest to bring attention to what needs to be done in India.

Rahul Gandhi tweeted: ‘While our PM tiptoes around his garden making Yoga videos, India leads Afghanistan, Syria & Saudi Arabia in rape & violence against women. What a shame for our country!’ expressing anger towards the PM’s seemingly lack of attention to misogyny within India.

In April, Modi responded with enacting a death penalty for rapists. While this a fundamental deterrent, there seems to be a need for more to be done to educate a new generation, there needs to be the education of gender equality rather than the indoctrination of sexism, there needs to be a fundamental change of mindset so men don’t feel they have the right to do what they want to women purely because they think they are superior. An education of gender equality will, in turn, reduce female infanticide as girls will be respected and valued. It will also reduce child brides as girls will be seen to be worthy of keeping in education and worthy of having a choice.

I know that it isn’t purely gender inequality that causes these things. There is obviously also the economic element, where poverty causes child brides and female infanticide. However, I do think a greater attempt at solving the fundamental mindset will make India a safer place for women.

Yes, I am aware that India isn’t the only place that suffers from all these issues, I just choose to highlight it because of its policies being under scrutiny due to this survey. Having been to India and traveled around the north of India, the freedom that women are entitled to is essentially different in each state/city you travel to. This is due to different levels of education in each state, different exposure to the outside world and different stages of modernity. I found it interesting how some rural villages in Gujarat don’t allow the girls to be educated but then in main cities and modern cities such as Delhi women have much more freedom to go out and have the freedom to date etc. before marriage.

Does Loving Makeup Make Me A Bad Feminist?