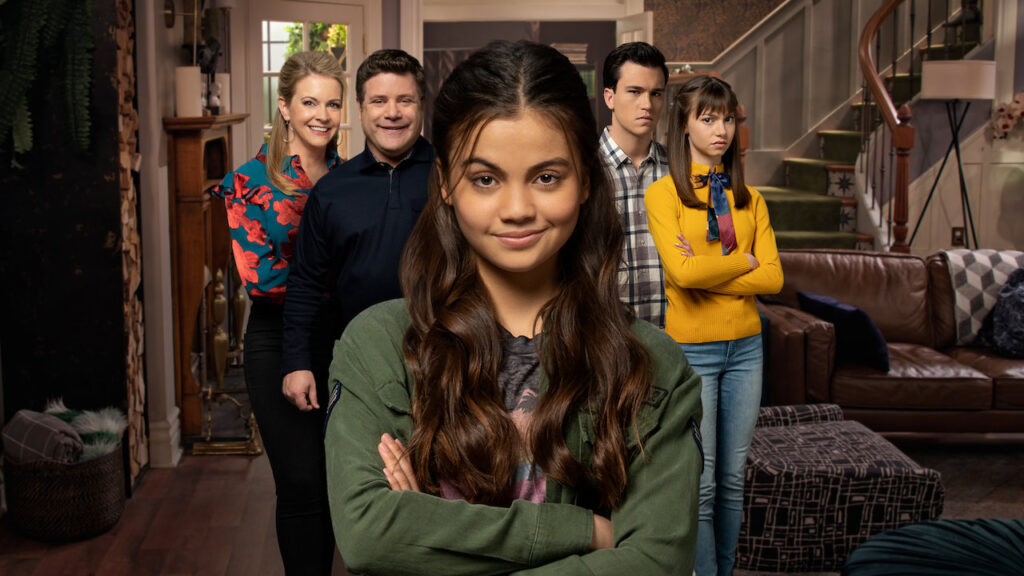 I like to think of myself as a television show aficionado. Thanks to my youngest sister, Olivia, I am not only well versed in adult dramas and comedies but in children and family shows as well. Olivia is like many ten-year-olds her age: she spends time on TikTok, Snapchat, and Netflix. Sometimes I don’t see her for hours; once she closes the door to her bedroom. I miss her, but I’m not sure she could say the same. After all, watching television shows is her escape from some of the stresses and drama of fifth grade.

I believe Olivia has advanced to professional status when it comes to finding the newest and best family shows on Netflix. Recently, she told me about a Netflix original comedy-drama called No Good Nick. At first, I was reluctant to try it, but once I did… Wow, no regrets.

No Good Nick centers around a young, intelligent, experienced grifter named Nicole, “Nick” (Siena Agudong). She shows up on the doorstep of Ed and Elizabeth “Liz” Thompson (Sean Astin, Melissa Joan Hart) and claims to be a distant relative. After fooling the Thompson’s as well as their children Molly (Lauren Lindsey Donzis) and Jeremy (Kalama Epstein), Nick becomes part of the family. However, Nick is only interested in getting revenge on the Thompson family. Or is she? Maybe all Nick needs is a family who truly loves her.

The plot of No Good Nick isn’t what technically drew me to the show. In fact, the characters, representation, and the message of the show got me pretty much addicted. Honestly, anyone could relate to this show. If you need a laugh, a cry, or to feel understood, No Good Nick has your back. But, then Netflix canceled it. Yes, Olivia was very upset as was the rest of the No Good Nick fandom.

Netflix seems to be doing this consistently when it comes to its original series. These originals just don’t make it, unfortunately. Most importantly, these are the shows that are geared toward families (One Day At A Time, Everything Sucks). They certainly shouldn’t have been canceled. In fact, No Good Nick has certain qualities that make it necessary for viewers to watch. Here are a few of them: (also, this show shouldn’t have been canceled)

I know, I know, every show has characters. But these characters embody representation in all its forms.

Liz Thompson: Liz is a powerful female who crushes it in her career. She’s a gourmet chef and owns her own high-end restaurant, Crescendo. Liz shows young girls and women that they can achieve their dreams and thrive in the male-dominated restaurant industry. She also teaches young girls and women that they shouldn’t be afraid to be competitive from time to time. Show others what you’re made of!

Molly Thompson: Molly is an activist, a humanitarian, and a savvy social media influencer. She fights for equality, the planet, and all animals. She represents the strong, young women that desire to change the world.

Jeremy Thompson: Jeremy is perhaps one of the most beloved characters. He’s passionate about history and politics. Most importantly, he’s gay and proud.

Nicole “Nick” Franzelli: Although some viewers become frustrated with Nick and her behavior, she represents independent young women who will do anything to save their family. In addition, she also represents children in foster care.

Representation is the last quality that caused me to binge-watch this family show. As mentioned previously, Jeremy Thompson is gay and proud. However, through the majority of the episodes, no one knows that. When he decided to come out to his family, they reacted positively; with support and love. Liz exclaims, “We love you, and we are so proud of you.”

If you want to watch a show where you can see yourself in a character or see your community is being represented, No Good Nick is that show! Maybe something can be done, and this show will be renewed. But, if not, we can always cherish Jeremy’s coming out scene:

Coming out to your family can be incredibly tough and scary, which is why it’s so powerful when a family sitcom like No Good Nick includes a scene like this. pic.twitter.com/ofyiqnnFnq