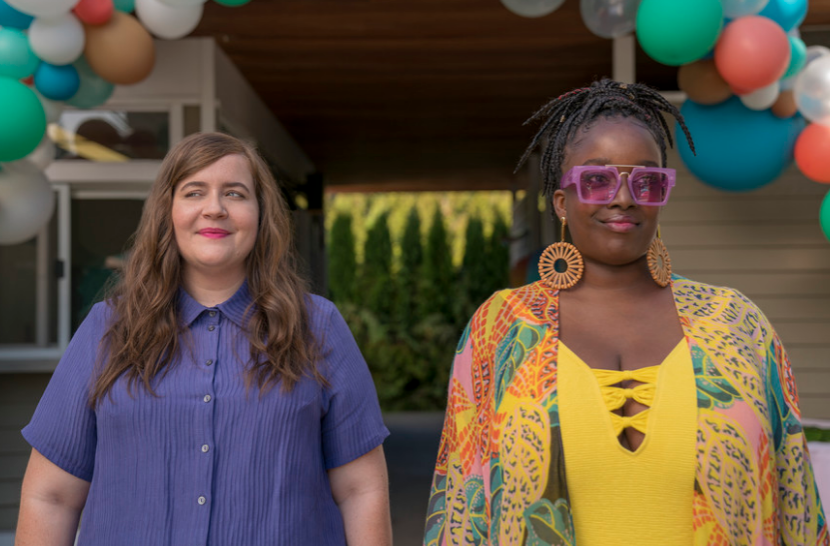 According to Dictionary.com, “shrill” is an adjective defined as “high-pitched and piercing in sound quality.” Our connotation to the word is highly negative and can even create an involuntary cringe in one’s body as the word connects to corresponding sounds in the brain. Even more negatively, it’s an adjective that has been used to describe women specifically. This has been discussed by Michelle Wolf in her comedy special “Nice Lady,” where she notes that the tone of a woman’s voice is something that she cannot control. As women, we know that our voice is just one aspect of our lives that we cannot control yet we are criticized for. Shrill, a new show that can be viewed on Hulu is adapted from the 2016 book Shrill: Notes from a Loud Woman written by Lindy West, who helped write the pilot episode. This non-fiction book criticizes sexism and fat-shaming as well as stigmas surrounding periods and abortions, which are elements the show also focuses on.

This first season of Shrill is all about Annie, the main character, demanding what she deserves in her relationships, her career and her life. Like many women, she has put what she wants on the sidelines for multiple reasons yet we watch as a series of events change that. As Annie deals with the many unsolicited comments about her body made by strangers, coworkers and her family she learns that her opinion of herself is by far the most important. The best scene in the first season of Shrill is from the body positive pool party that Annie attends in the fourth episode, “Pool.”

In the show, Annie writes articles for an online platform. The fourth episode begins with her boss, Gabe, speaking to the staff in a meeting. He insults the writers about their exercise habits and then mandates a 10-mile bike ride activity less than a week in advance on a Saturday. He forbids children from coming and explains that these now monthly activities will all be for the sake of receiving a health discount in the company’s new insurance program. After the meeting, Annie pitches a story about an event known as the “Fat Babe Pool Party” highlighting its goal of inclusivity and “feeling comfortable in [your] own skin” and her boss rejects this idea. Fortunately, she decides to go anyway to see if she can write the story she knows is thereafter encouragement from a friend. After telling the guy she has been casually dating to either treat her how she deserves or leaves her alone, the scene opens on Annie and her roommate, Fran, walking into the pool party.

This event ends up being “maybe the best day of [her] life” and one of the greatest scenes in TV history. While the main character arrives to the pool party in clothes and sticks by a journalist point of view in the beginning, after talking to women of different body types and friendly, open personalities and dancing with them, she takes off her layers on top of her swimsuit and dives in the pool. The scene shows a beautiful view below the water, panning over floating bodies in the pool enjoying themselves and flaunting natural fat on their legs and cellulite, details that are common on women’s bodies no matter the body type. These are features that are frequently edited out of media, particularly in magazines that women see everywhere.

Throughout the show, Annie demonstrates growth by learning how to ask for what she desires in her relationships and professional life, where her voice is heard in articles yet her appearance is continually called out publicly. When her boss accuses her of not trying after she shows up late to the last minute mandated activity, she in turn writes an article entitled “Hello, I’m Fat” after ranting to her friends about all the people who have tried to control her body and how society attempts to control women. Her roommate and her date agree that they also have felt that way. The article later becomes a hit as many people relate to her experiences.

At the beginning of the “Pool” episode, Annie is shown as a child on vacation with her family reading in the hotel room rather than swimming with everyone else. At the end of the episode, young Annie is shown swimming at night alone. Yet in “Pool,” Annie swims in a crowded pool with a feeling of pure bliss. This moment came from not only accepting herself as she was but requiring others in her life to do so as well. Shrill has joined the growing collection of amazing comedies that include more stories that connect to modern women that are made by modern women. Annie has to fight to be shown the respect she desires in the show. While she does not win every battle, these confrontations give her the satisfaction of truly respecting herself and her journey through life. No matter what you look like, Shrill will embolden you and leave you feeling content and inspired to simply live your life as you. Rather than depreciating ourselves, we all can learn to improve on respecting ourselves and requiring others to do so as well. A part of demanding respect is highlighting that we all deserve more representation in media. In this way, Shrill leaves us feeling hopeful and inspired as we look forward to a future with more comedy that we can see ourselves in.