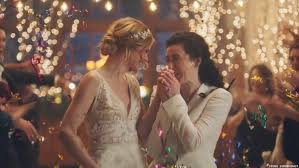 If you haven’t heard here’s a little summary:

The Hallmark Channel aired an ad from Zola, an online wedding registry, wedding planner, and retail company. This ad featured brides kissing. The ad was wholesome and reflected the world we live in today:

There were many who praised Zola and The Hallmark Channel for featuring and airing a commercial with a same-sex couple. Those in the LGBTQ+ community strive for representation and want to see themselves on screen as they are in real life. This ad did just that. Those who were watching could see themselves in that couple and this was extremely important.

But, a conservative advocacy group One Million Moms, part of the American Family Association, complained about the ad. One Million Moms stated that the Hallmark Channel’s commercials are “usually safe for family viewing. But unfortunately, that is not the case anymore.” Essentially, this group believed that the kiss shown between the lesbian brides weren’t safe for children or families. Other people agreed as if watching a commercial can turn their children gay. This caused The Hallmark Channel to pull the ad.

After pulling the ad, #BoycottHallmark began trending, with celebrities and everyday people voicing their disappointment, concern, sadness, anger, and frustration. After all, it’s going to be 2020 and love is love! People came together to support those in the LGBTQ+ community and that was beautiful, amid the homophobia and terrible decision The Hallmark Channel made.

Mike Perry, the CEO of Hallmark stated, “Our mission is rooted in helping all people connect, celebrate traditions, and be inspired to capture meaningful moments in their lives.” He also declared that the Hallmark Channel is dedicated to diversity and inclusion.

However, is this enough?

The Hallmark Channel produces and premieres many shows and movies. But, how many of those movies show LGBTQ+ couples? How many of those movies feature people and women of colour? None. This needs to change. For a channel with so much pride, it really does not mirror the world we live in today, nor does it reflect all individuals.

The Hallmark Channel may believe that they have done the proper thing, but they still have a long way to go. Let’s see some Hallmark shows or movies with LGBTQ+ couples and people and women of colour!

5 Reasons Why You SHOULD Date Indian Girls 14914

Colorism And Anti-Blackness In The Asian Community 11331