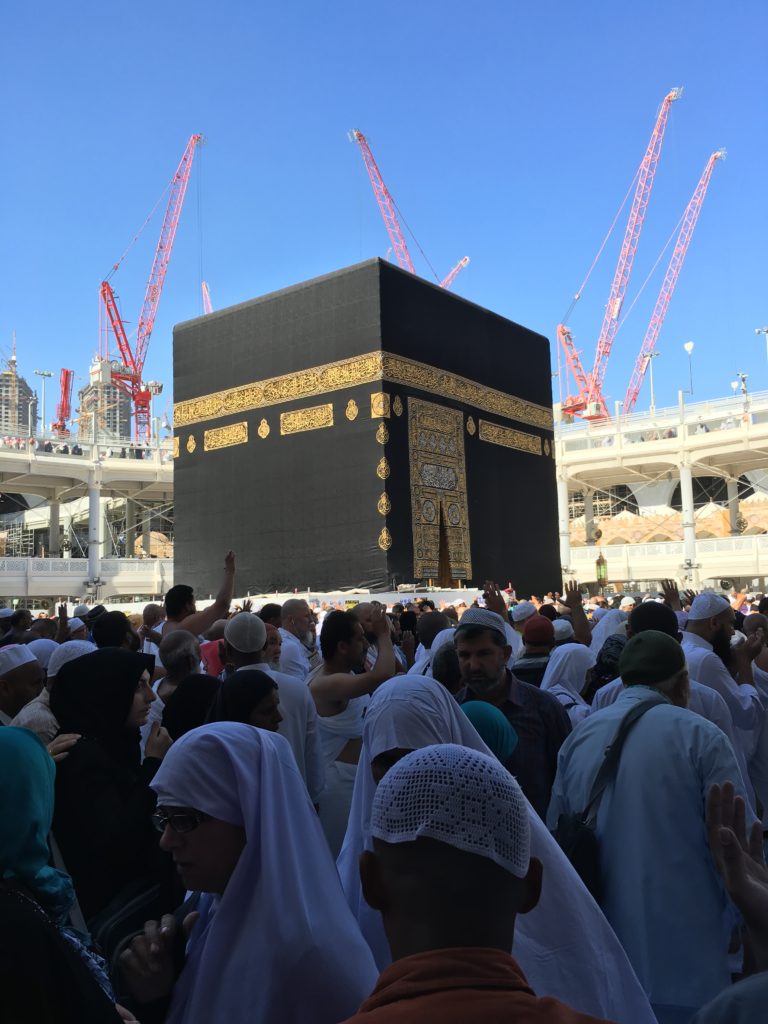 Disclaimer: this is just my opinion and experience in the Middle East, in Saudi Arabia. It is not intended to offend. Also, if you read this and think that I am merely complaining, then understand that everyone experiences different things. If you aren’t forced into a hijab or niqaab, and you’ve done it by choice, then good for you. If you love Islam and it has not been forced upon you, you find it’s beauty and do not think it has been used to cause anyone harm, then good for you. But do not speak over other’s experiences just because you are different and are privileged. Thank you.

Two years ago, in November, my family decided to embark on the holy journey to Mecca and Medina to complete Umrah. Initially, I was not asked to go because my Mother did not think I wanted to. However, during the last few weeks, I felt as though it’d be a good chance to redeem myself. In front of Allah. (God). I had support from my non-muslim boyfriend and my family members to go, and I did. But I was scared, because I did not feel worthy of going, I did not feel like I had done enough good, prayed enough, believed hard enough to be going to such a sacred site. I was so worried and scared I did not think about the culture differences I was going to face… as a woman.

Mecca was beautiful and I had a fulfilling experience for a first timer. However, I had heard so many horror stories of women being groped/sexually assaulted while doing the Tawaf – going around the Kaaba’ seven times in a defined manner ending with prayers – that I made myself as small as possible in the crowd, dodging people’s elbows, hands and even bodies as much as I could especially since I am claustrophobic. But it happened. Twice. I was fully clothed, I had an abaya on, I was wearing a hijab and during umrah, you are not allowed to wear makeup or even perfume, so before the blame game is played, I was dressed as modest as modest can get.
I haven’t spoken about it because I like to think of it as a mistake, maybe even me imaging it. Once, an older man was beside me and half his body was against mine, I kept trying to maneuver myself away from him. I even turned back to glare at him, but he gave me a really creepy smile as his hands brushed against mine, and I didn’t care anymore. I pushed my way through the crowd to disappear. The second time, I felt a hand brush against my bums, I turned to look back but everyone was concentrating on prayers and all the men looked the same, I let it go. Things like these can happen, even in such a holy land… where God’s house is standing, and I believe it needs to be talked about, whether we like it or not. But I am lucky that what happened to me was not extreme.

Madinah… The land and burial site of the Prophet. I was excited really especially since Mecca made me feel things I did not think was possible but… I was so disappointed.

And that is the truth.
Black. That is all I saw. Women in black. 3/4 of the women I saw were in black. Almost, almost as though they were mourning, grieving. I did not understand it, and I still don’t. Here I was, in the most colorful abaya possible because I love colors and here, I was standing amongst women who were in black. All the time. Little girls too. My mother was afraid for me because I walked where I wanted to, I looked men in the eyes, I was covered in colors. Wherever I went men were staring… I was just walking. Men were glaring… I was just laughing.
They looked at me like I was a walking sin. And I felt like one. I hid it well but oh, I felt it. She was afraid for me, but I was afraid for the women in black. I wanted to know. Were they happy this way? Were they hurting? Were they okay? Were they forced to cover up in all black? I was disturbed even a little scared. For them. I was trying to understand, still am because I come from such a different world. A privileged one. Where we (women and men) mixed, we laughed, we danced, we made mistakes, we could be loud, we could be colorful, we didn’t have to go everywhere with a man, we didn’t need a man answering for us, talking for us, making decisions for us, we.. were part of society.

But here… women weren’t allowed to buy food on their own, Starbucks had a clear sign saying “women not allowed.” We went into a jewelry shop and my aunty of 54 years old asked the salesman a simple question. She asked again and again, and he didn’t even look at her, he didn’t even say a word until my male cousin appeared and he asked the salesman. Then, we got a response.
I have heard of people talk about how they do this out of respect for women but my aunt did not feel respected… she felt ignored; ignored just because she was a woman. Did I see my privilege, living in a different world altogether? Loud and clear. My last experience and most disappointing one yet was fighting my way through to get into The Raudah – Heaven on Earth, to see where our beloved Prophet was buried, but everything was covered up for the women. I saw nothing except white canvas walls.

Women were crying, screaming, pushing. I almost choked to death because a woman behind me had grabbed my hijab to pull herself up and… I saw nothing. I didn’t understand, I don’t understand. And what did my male family members see? Everything. The gates, the gold, the green. And I got nothing… because I was a woman.
My mother, who was 62, I had never ever seen her look that disappointed before. She kept murmuring how when she went for the first time almost 30 years ago, women were still allowed to see the burial site.

Imagine that. A 62 year old woman. Pushed, shoved, clawed her way through a wild crowd, wanting to just catch a glimpse, just a glimpse and all she got was white canvas walls because she is a woman.
And the reason for that, my another aunt gave, who is an Islamic scholar and has studied Islam intensively throughout her life, all she said was, “they did it because we women are overly emotional you know? We cry so much then we cry onto the pillars and all and it is not good so they did that.”

She said it like it was nothing. Like as if they hadn’t just blocked us women out from seeing something so sacred, so important because.. we cry?

I was angry. Seething inside. We cry.. out of love. For The Prophet. We cry. That we have lost such a gem, beauty. We cry because we feel. Would The Prophet himself have allowed this? Would Allah deem this noble, right, respectful towards women? I still am angry whenever I think of my mother’s disappointed face, my aunty’s answer. How can it be right?
I left, with a heart very heavy and disappointed but with a new perspective. One that recognized my privilege but one that also recognized that there were many sides of Islam or Muslims that I had yet to discover.
But whatever I saw… felt and experienced… confirmed two things for me: the beauty of this religion and… the issues of this religion.