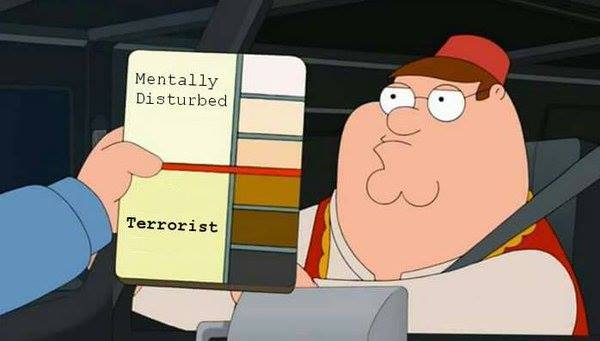 Media bias on what constitutes a terrorist is prevalent once again in the aftermath of the Las Vegas shooting, which killed 59 people and injured 525. Of course, as always when mass shootings happen in the USA, we are reminded of the ridiculous gun laws, or lack of, that they have and the important debate is reopened. But, often when tragic events of a wide scale like this happen in the western world, depending on the race and religion of the perpetrator(s), (in this case a white man) the media has difficulty in using the word terrorist for anyone who is not brown and/or Muslim.

In recent articles and news broadcasts speaking on the terrorist, Stephen Paddock, I have been disappointed but not surprised to see the level of humanization given to him, someone who has killed 59 people. I have learned a great deal about Paddock’s personality, his hobbies, his past life and relationships before the attack, all simply from the mainstream media. So many humanizing characteristics, much more than I have learned of other terrorists, for example, Salman Abedi who did the Manchester suicide bombing. The epitome of white privilege is having news outlets worldwide speak of your golf club membership after you just committed the largest mass shooting in modern US history. I understand wanting to know more about someone who could do such a thing, especially as he is allegedly not affiliated with a terrorist organization but this is becoming an obvious inclination.

Another issue with the media dialogue in this instance is the ease in which they blame or assume mental illness without any formal statement. This is often the case with white criminals and specifically mass shooters. This is not only encouraging public sympathy but also extremely de-validating and offensive to mental health sufferers like myself. In a world where a stigma against those who have mental health issues is ever relevant, this type of dialogue amplifies it even more.

Although this is a tremendous issue and attitudes must change, these biasses are all too familiar in other situations too. For example, a black victim of police brutality may have a previous mugshot used by the media or we will be told of his past as “no angel” but with the white rapist, Brock Turner we saw academic photos of him and were told of his prospering swimming career.

This is an issue that is extremely damaging and one that I do not see changing anytime soon, particularly in the current political and social climate. Media is now a main form of socialization and is becoming even more influential, a main component of shaping thoughts and opinions. The media must be more conscious as should we all.

I Don’t Know You, But I Stand With You