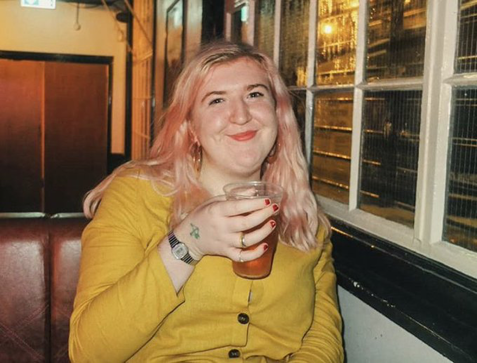 With the easy accessibility of social media, we are seeing more and more plus-size and body-positive women on our feeds. We are finally seeing a more inclusive representation of the female body. I spoke to body-positive Instagram activist Phoebe Jameson. Phoebe spoke to me about body shaming, plus-size representation, and her new project, ‘The Speak Up Space.’

Q: When did you first start to experience body shaming?

“I think unintentionally when I was seven years old. In school, we had to weigh ourselves in the lesson. I was the biggest, and so I lied about what size I was as we had to put it on the board. I didn’t want to be the biggest as there was so much shame around it, and the smallest was the best. I mean, why do we need to weigh ourselves at school? That should be between you and your doctor. But, intentionally in Year 7, when I was 12, I started to receive fatphobic comments.

I’ve always been bigger than everyone because I’m really tall, but this doesn’t mean I’m unhealthy. I don’t understand why people are so intrusive and think they can comment ‘why are you so fat?'”

Q: Do you think body-shaming disproportionately impacts girls and has a sexist/misogynistic undertone?

“I think that is the seed of it definitely. We were property, women were property, and they still are in some countries, so that definitely has something behind it, and that’s not dismissing any men or masc presenting people that are body shamed. In my own experience, most men (not all) do just feel like they have the right to comment on my body as I’m fat and a woman. They think it’s a double whammy. There’s definitely a misogynistic side to it, but I have been body-shamed by other girls.

I’ve also experienced fat calling. I did a piece for ‘Our Streets Now’ were I spoke about this. I was 15 in Shoreditch, and I was crying after an argument with my sister. I walked away with my headphones in, and a middle-aged man came up to me and said, “I’d be crying too if I was that fat.” My different mindset at 15 meant that it broke me. If that happened now, though, I would have fought it.”

Q: Would you label yourself as a body positive activist?

“Yes and no. I think that the general body positive movement is not very inclusive. I think the sentiments behind it are really good, but the plus-size women mainly included in this are airbrushed and have no body hair, which isn’t representative. They’re normally only up to a size 18, which is plus size, but it goes beyond that. I would say I’m more body neutral as I like to acknowledge that we’re not always going to be in love with our body every day, and we will have neutral days.”

Q: Do you think we should be aiming for more representation of different and realistic body types in mainstream media, such as Hollywood films and television, as well as platforms like Instagram?

“Yeah. I feel like a lot of the films and television that feature bigger women at the moment always make their weight the storyline, like the show Insatiable. I love Rebel Wilson, I think she’s a great actress, but every film besides one she’s featured in they make her the brunt of so many fat jokes. It’s not funny to be fat, and that’s a bad message to send.

You turn on the TV, and the average UK woman (size 16) isn’t even featured in mainstream media, so what hope do bigger people have? I find a lot of content away from mainstream media, but it would be great for future generations to have more representation on mainstream TV. That would have helped me so much when I was younger.

I think representation is coming up, but It’ll take a few more years.”

Q: Have you seen the show Insatiable?

Yes. I think that’s what triggered my self-acceptance as her experience when she was bigger reminded me of my own. It was an awful show and encouraged really unhealthy habits. It’s such a toxic show and can impact people in so many different ways.”

Q: Thin does not equal healthy. How do people respond to you when you try to explain this to them?

“One woman on my timeline a few months ago who was thin called her body ‘elite’ and started to question my own health. But my health is none of her business, and her health is none of my business. What I say, and this is a moral I hold, is you cannot tell what someone’s health is like by looking at their appearance. I have PCOS and an underactive thyroid, which causes me to gain weight. You cannot see that by simply looking at me.

I don’t feel the need to share it all the time as its only my business, but I’m living proof that you can be fat and healthy. I’m very tall, I’m over 6ft, and my doctor told me look, Pheebs, you don’t need to lose weight. I was just shocked as that’s what is ingrained to bigger people all their lives, we’re told to lose weight all the time.

My friend, she’s a lot thinner than me, but she’ll always say to people body-shaming me that she’s a lot unhealthier than me. She drinks, she smokes, and she doesn’t eat the best, but because she’s thin, everyone presumes she’s a healthy person.”

Q: Do you think you’ve reached a point of full self-acceptance of your body? And what is some advice you can give to people struggling with body positivity?

If I stay this size forever, I’ll be fine with that. I think I learn more every day on my journey to self-acceptance. I had some spots this morning, and I looked in the mirror, and I just thought, yeah, I do like how I look. For others, It’s not going to be an overnight thing. This time last year, I was so different. I’ve been in that space of self-hatred, it’s been a long process, and it’s not overnight for everyone. It took therapy for my mental illness and a lot of changes.

Some general advice would be you have to acknowledge you’re going to have your body forever, so why spend your time hating it? Another thing I say to people is if you can love and compliment my body, why can’t you do the same for yours?

Also, there’s so much toxicity on social media that you need to cleanse your feed from. Unfollow the Kardashians. They promote such unhealthy diet culture with their flat tummy teas, yet they also preach self-love. They shouldn’t be trying to say that they look like this through dieting and slimming teas as they don’t. It’s surgery. I have nothing against surgery, and I think it can be a great thing for people’s confidence but then at least own up to it.”

Q: Do you think it’s hard for women to simply exist without being judged for their appearance? (the male gaze theory)

“I think it’s hard to exist as a woman in society anyway. Regardless of appearance, we’re viewed as the lesser sex, and as much as we fight it, that’s still how it is today. It’s definitely changing, but there are still men that think they are above women. Not all men, but there are lots and lots of men who do think there is a leeway to criticize my body because I’m a fat woman that posts my body online. It’s not an open invitation to hate.

I always think as well, would they do this as much to a thin woman? Why do they think because I’m fat that they can insult me? I’m a very resilient person now, and I try and challenge the hate so I can inspire other women like me to feel confident in their own bodies. I’ve had people repost pictures of me publicly in an attempt to shame me, and I had to take a break from twitter. But why did a man in the first place think that this was okay?

A lot of men definitely do not respect women they’re not attracted to as well. I can accept that not everyone will be attracted to me, but then would they make the same comments to a woman that they are attracted to. No, they wouldn’t. But we’re not here to be simply attractive to men. We still deserve respect, regardless. A lot of women who experience shame for being a woman get a lot of anger within them. They think, why is this happening? Why is society allowing this to happen? It’s just not fair.”

Q: Moving on to something a little different to finish on, can we talk about your newest venture ‘The Speak Up Space’? Can you tell me a little bit about this and what this means for you in the future?

“Yes, definitely. So, I am the founder of The Speak Up Space, which is basically a safe space for people to discuss and even just vent to our advisors about their experiences of sexual violence/harassment. Therapy is not as accessible as it needs to be in this country, and Speak Up Space wants to help people access services tailored towards them. For example, you could search up sexual violence helplines, but how do you know which ones right for you? We want to aim to point people to the best resources for them after speaking to us.

Also, from what I’ve experienced so far, a lot of these people just want a safe space to vent, and they may not have ever told their story before, and it’s great that we can give them the space to do so in a confidential way.

For the future, we would eventually like to become a charity, but obviously, we are just starting out, so that’s not something we have discussed too much yet. We will probably also set up fundraisers for it. We have a lot of creatives working with us, so we want to design tote bags and badges that we can also sell to raise some money for our venture.”

Q: Finally, what are some of your goals for the future?

“I’m working towards being a mental health worker. I’ve had such negative experiences myself with mental health services, so I want to give back to others. I’m also an aspiring journalist as I do think I have a way with words, and a lot of people are influenced by that. I want to give representation to things that aren’t in the mainstream, too, by becoming a journalist. I’ve also applied to the BBC’s apprenticeship scheme, which has obviously been delayed due to the coronavirus, but I hope to get started with this as soon as I can.”

Phoebe Jameson is an activist and founder of The Speak Up Space. Phoebe has appeared twice on BBC Woman’s Hour and has a large social media following.

Read also:
5 Green Flags To Look For As A Dating Feminist
A Walk Through The History Of Feminism
Girls Of Isolation – Showcasing Body Neutrality

The Fetishization Of Bisexuality In The Media: Why It Must Be Stopped

The Illusion Of Powerful Women In The Fashion Industry