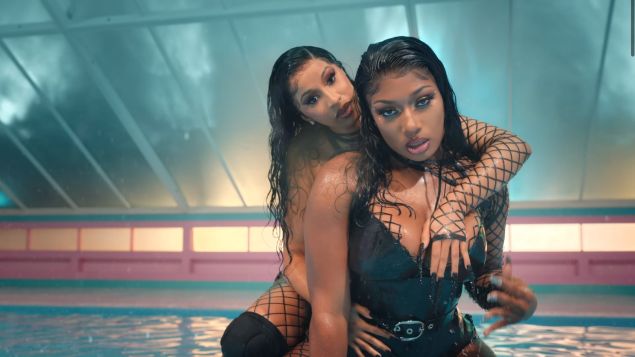 Cardi B and Megan Thee Stallion

Cardi B and Megan Thee Stallion’s visually stunning yet lyrically filthy ‘WAP’ has us frantically lowering the volume every time someone enters the room, lest we are caught rapping, “yeah you f*****g with some wet ass p***y.” Cardi and Megan’s new single is not short of vivid sexual metaphors.

Demonstrating their sensuality, Cardi and Megan rap about an astonishing array of sexual desires whilst serenading each other in a snake pit, harmonizing in a funhouse. Making cameos are a few known female celebrities who unapologetically show off their individuality. ‘WAP’ is the epitome of female sexual empowerment.

Both women have in recent years become a powerhouse, radiating empowerment in a typically male-dominated music genre. Although they are not held accountable, male hip-hop artists face criticism for their derogatory and misogynistic lyrics directed at women. Cardi and Megan have shown resilience and taken back control of the narrative of femininity in hip-hop. During a period of social unrest, where black women are fighting for protection, this song couldn’t have been more opportune.

‘WAP’ demonstrates strong sexual confidence, probing at the transparent message that women shouldn’t have to downplay their sexual needs. However, the song was seen by some as degrading. Political candidates, such as Angela Stanton King and former Congressional candidate DeAnna Lorraine, showed their disapproval of the song. Their argument being, the message promoted “aborted babies” and “organ harvesting” while also claiming they have set “the entire female gender back.”

The unnecessary outrage ‘WAP’ has received only highlights one thing; sex is only a taboo expression in music when it comes to women, specifically women of color. Sex and extremely vulgar language in lyrics isn’t a new theme. There have been many famous hits – by male artists – that explore sex and drugs. So why are the controversy and criticism only reserved for Megan and Cardi?

It’s hypocritical that people that are silent when rap music constantly degrades Black women, but they are vocal when women take control of their own representation. The music produced by male rappers has led to stereotypes of Black women that consumers have become accustomed to and expect. Women in the music industry often fall victimhood to criticism when they produce anything celebrating their sexuality and womanhood. Black female artists face more backlash. They are mocked and hyper-sexualized for daring to be expressive.

Some viewers may find ‘WAP’ to be degrading to Black womanhood, but Black women hardly have control over how society perceives them. The constant hyper-sexualization and fetishization of Black women as a result of the hip-hop industry has led to harmful stereotypes being perpetuated and ingrained in how society views black women’s bodies.

What sets womanhood back isn’t Cardi B and Megan twerking in a music video, rapping about their p***y. It’s societies acceptance and justification of harm towards Black women for their bodies and their sexual freedom. It’s men seeking to reconstruct black female rapper’s art to objectify their bodies catering to their desire. The controversy shrouding ‘WAP’ is that female sexuality isn’t a problem- so long as men control it.

Black women have always marched to the forefront, acting as trailblazers in the fight for equality. Critiquing ‘WAP’ as undignified is almost critiquing black women for their individual expression of their womanhood. Feminists rally with women of other cultures when they advocate reclaiming their bodies. They are deemed progressive and passionate. Black women are not awarded the same treatment. Yet they should be, whether they are demanding for a change through art, fashion, or a sign at a protest.

Ultimately, WAP, despite its heightened criticism, couldn’t be more necessary. Now is a time where people are learning to check their biases; the neglect black women have faced from the music industry to law, to the health care system is becoming more visible. WAP is not just a catchy song about sex, but a perfect example of femininity and sexuality. It’s a song about a woman exploring their pleasures through somewhat shocking but humorous sexual innuendos. Also, it’s a bop.

Read also:
3 Songs Released On Juneteenth By Black Female Artists That Need To Be Heard
Should The Word “Bitch” Offend Me?
Stop Sexualizing Women Of Color

The Irrational Hatred Of Stretch Marks

Being Fetishized As An Asian Woman