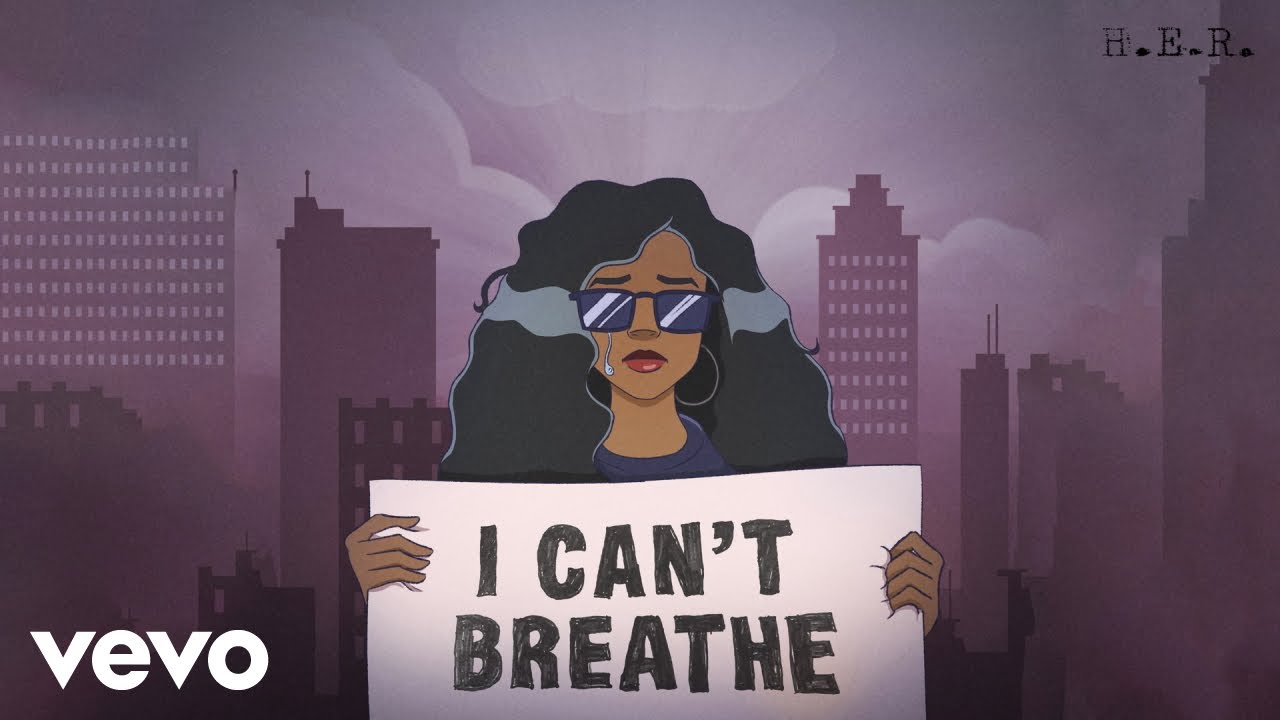 Music is demanding. It grabs our ears and forces words and sounds to be heard, analyzed, understood, and hopefully appreciated. There is the argument that all music is political, with some being more divisive than others, and to say that recent work made by Black artists stands in solidarity is a gross understatement. Amidst the murders of George Floyd, Breonna Taylor, and an alarming multitude of innocent Black Americans due to police brutality, these songs not only grab ears, but they also hold them accountable to what is being said. Being released on Juneteenth, the holiday that commemorates the emancipation of enslaved people in America, these songs pack a punch before the first chord even rings. These are some picks that are screaming Black Girl Magic today when its recognition is needed the most.

We expect nothing less than greatness from Queen B herself, and “BLACK PARADE” certainly does not disappoint. Lacking any resemblance to My Chemical Romance’s emo anthem, this song is upbeat and further, uplifting. As Fitzgerald sums up in NPR, the song is undeniably celebratory and acts as a symbolic “stand-in” for Juneteenth parades canceled due to Covid-19. Black is beautiful, and it is here to stay with this driving tune.

“I’m goin’ back to the South . . . where my roots ain’t watered down” opens the track by reclaiming her identity and her ownership of it. From the name drops of “black-owned” to “I’ma let it dread all up,” Beyoncé expresses unhindered pride for her Blackness. Specifically, she praises the community’s enterprise and natural beauty. The lyrics roll into each other with a distinct ebb and flow over the classic hip hop drum track. In the same vein stylistically as “Formation,” the song is set up to be a jam.

Repeated throughout is her cry, “motherland drip on me.” In combination with the references to ancestors, traditions, and facets of Egyptian, Nigerian, and other African cultures, the song broadens itself toward a Pan-African rather than exclusively African American perspective. These details honor a centuries-long history of African and African diasporic communities and their shared experiences. As a result, Beyoncé’s protest is that her Blackness is radical, beautiful, and complex, contrary to white supremacist rhetoric.  The post accompanying the song explicitly states, “Being black is your activism,” and her website contains a list of Black owned-businesses (i.e., the ‘Black Parade’) to generate revenue for them. In addition, proceeds from the song will be donated to black-owned small businesses in need of financial support. Therefore, Beyoncé and her musical advocacy provide the backbone, support, and reassurance the movement deserves in order to thrive and persevere.

H.E.R. blew into the mainstream because of her sweet vocals and impressive guitar playing on pop/R&B tracks, running away with 2 Grammys and several other nominations in 2019.  Needless to say, this recent release on Juneteenth is daring, raw, and powerful. The title itself is a direct reference to George Floyd’s infamous last words, which will forever take on a distinct meaning tied to police brutality.

From the start, this song declares itself as a large production: a string section lingers in the background, and the magic sounding glockenspiel rains its sonic sparkles. It can only be described as lush; an adjective often likened to Motown artists such as the Jackson 5. Her vocals enter in a catchy melody. The lyrics glide into the next phrase with, frankly, little room to breathe (perhaps intentionally as symbolic reference). The song is pleasing to the ear, despite words expressing the fatigue and pain caused by racial injustice. With the chorus, the fatal words hit, “I can’t breathe / you’re taking my life from me / I can’t breathe / will anyone fight for me?” The last line is followed by a bluesy minor chord progression sealing in the melancholy. But this track does not linger on the sadness.

The middle of this song features a lengthy spoken word, rap-like interlude criticizing the systemic oppression in this country due to a repeated narrative of white racist leadership. Powerful phrases evoke the need for white people to remain accountable for both their overt and unrecognized racism and privilege. She declares, in direct reference to Gil Scott Heron’s poem, “The revolution will not be televised / Media perception is forced down the throats of closed minds / So it’s lies in the headlines / And generations of supremacy resulting in your ignorant, privileged eyes” expressing the centuries-long suppression of Black voices.

She goes on to call out white people’s unwillingness to have these uncomfortable conversations about their ingrained racism, that it is too hard for them “To swallow the strange fruit hanging from my family tree.” Here, she references the haunting song on Black lynching, “Strange Fruit” by iconic blues singer Billie Holiday. This section ends with the rallying, “We can’t breathe.” H.E.R. situates herself in the history of Black musical expression against white hegemonic oppression. According to Rolling Stone, she prefaced the song during the iHeartRadio Living Room Concert Series by asserting this recognition of her ability to carve her space in history as artist and activist (the two being nearly synonymous):

“Just by the title, you know that it means something very, very kind of painful and very revealing… These lyrics were kind of easy to write because it came from a conversation with what’s happening right now, what’s been happening, and the change that we need to see. I think music is powerful when it comes to change and when it comes to healing, and that’s why I wrote this song — to make a mark in history.”

While not celebratory, “I Can’t Breathe” balances the melancholy with the uplifting. It projects a message of pending change necessary and dependent on the solidarity and efforts toward elevating black lives.

Originally recorded in the 1970s by Eddie Kendricks as “My People . . . Hold On,” Amber Mark’s rendition is simple yet mesmerizing. Beginning with an irresistible bongo and shaker rhythm, Amber’s voice soars over in smooth breathiness with the title lyrics. With that said, the song continues with gradual layering. Next, the electric keyboard comes in, reminiscent of 90s neo-soul and R&B. When the chorus enters, her voice layers in harmony on “my people” in a call and response format with “hold on,” making the song downright spiritual. The repetition of this phrase ensues with various improvisations over the backing chorus in a gospel-like manner. Further tying its connection to the gospel is the upcoming crescendo in a simple “ah,” figuratively raising the listener up.

This crescendo also marks a transition in the song into more modern territory. A hip-hop style drum track is added in as if bridging the song into the present moment. Her voice continues and gains more power with its riffs and pitch elevation. The song essentially reaches its climax and then recedes, repeating the phrase “hold on to love.” She drives home the importance of remaining united and respectful of one another in a movement that champions the necessity of human rights for all. When the music quiets, the sounds of protestors’ chants rise in “Justice Now” -grounding the track in the reality of ongoing Black Lives Matter protests.

The song’s layering from its start is a musical representation of time passing and the history of black music from 70s soul to modern-day hip-hop, R&B, and so on. Achieving the same effect as H.E.R.’s and Beyoncé’s lyrical historical references, Mark’s musical choices in this track also engage in a history of Black music against injustice. This iteration uses the simple lyrics and chorus to encourage others to sing in solidarity with her; Mark’s “My People” beautifully relays the intangible value of perseverance.

If the pandemic has done one thing for people, it has given us time to think, to ruminate, and, most importantly, to create. These songs are only a few of many that demand the recognition that Black Lives Matter, that being Black is something to be proud of, and that hate has persisted too long. For instance, Kiana Ledé released a new version of “Dear Mr. President” featuring sound bites of protests, and Da Baby released a remix of his most popular song, “Rockstar,” with commentary on recent police brutality with the murder of George Floyd. It was nearly six years ago when Kendrick Lamar’s “Alright” became the official anthem of Black Lives Matter, and it is frustrating to say that this movement still needs to exist.

Listen to these songs, support these artists, and support the Black community. Consider donating or volunteering to your local Black Lives Matter chapter as well as other organizations and petitions combating racism that come your way. But most importantly, we must all remember to educate ourselves, reevaluate our beliefs, and continuously strive to be better people. Appreciating this music may be a small step in the right direction.

Read also:
The Movement Toward A Gender Inclusive Discourse On Police Brutality
Where Are The White Feminists During The Black Lives Matter Movement?
Don’t Freak Out But Your Faves Are Problematic

Are Autistic Girls Being Ignored?

Keep Your Hands Off My Underage Uterus