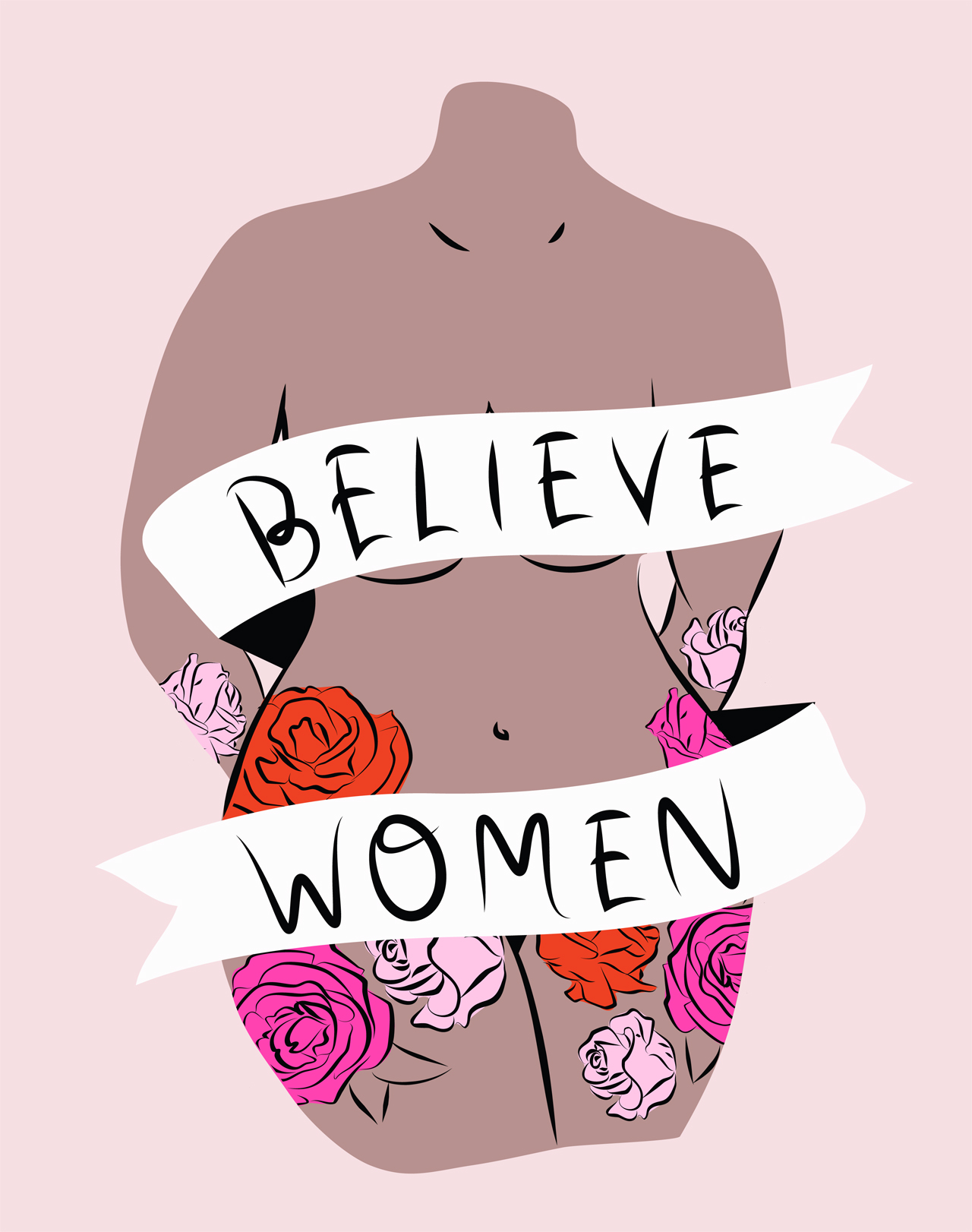 As humans, we have a tendency to ignore our main problems. We go about finding the slightest ways to avoid talking about our pain because talking about pain makes us both acknowledge and sometimes even relive it. We rather talk about how the guy who stepped on our new shoes ruined our day rather than start the conversation about how our pain actually came from the constant threatening texts from an abusive ex. Such scenarios are representative of human nature.

But a new era of awareness for sexual assault has risen. Many women are finally learning how to overcome this behavior of ignoring our pain. Having women address their pain and talk about their traumas is helping spotlight how prevalent, damaging, and severe sexual assault is.

Through the hashtag of #metoo, many victims have started to share their sexual assault stories. The “me too” term was started by Tarana Burke. As a civil rights activist from Harlem in 2006, she coined the phrase to help give sexual assault victims the motivation and support to speak up about their assaults. In late 2017, this term expanded into the #metoo hashtag online after many female celebrities came forward about their sexual abuse experiences with Harvey Weinstein; a Hollywood film producer. Harvey Weinstein has roughly 87 accusers including Cara Delevingne, Angelina Jolie, and Lupita Nyong’o. This increase in confessions has enabled many other sexual abuse survivors with motivation, hope, and strength to address their assault stories and reveal their abusers. The beauty and admiration of the #metoo movement lie in the empowerment women can give each other through something as appalling as pain.

Although, let’s not forget that almost every movement of social awareness comes with a plenitude of controversies. Time and time again, these controversies have demonstrated themselves as dangerous ideologies that attempt to degrade the movement in question. One that recently has been particularly catching my eye and angering my soul has been on the topic of false rape accusations.

In attempts to tear down the #metoo movement and its encompassing sexual assault accusations, people have been utilizing the tactics of false rape accusations. To drown out the legitimacy of rape cases on the rise many people are attempting to negatively utilize the occurrences of false rape accusations by arguing that any accusation carries the potential to be fake. Specifically, these aggressors will argue that women who lie about rape ought to receive the same sentencing that the rapist would have gotten had the case been true. Very often than not, I witness a greater amount of discussions focusing on putting those who come forth with false rape accusations in jail than discussions focusing on convicting actual rapists.

In addressing the statistics behind false rape accusations, their prevalence lingers around 2%-10%. In one research study conducted, out of 812 observed sexual assault cases, it was concluded that only 2.1% were false. These extremely low percentages reflect that false rape reporting, as opposed to legitimate cases, is something that public concern can afford to place on hold. We should switch our narrative more towards focusing on survivors that need our support. Nonetheless, it is important to realize that false reporting extends itself from the realm of rape crimes and finds itself at an intersection with domestic violence and murder crimes as well. Yet attention remains solely on false accusations of sexual assault cases and ignores its occurrence in other crimes.

How do “false rape accusations” get defined exactly in the law? A “ false rape accusation” sometimes strays from how it has been stated to exist. The FBI advises police departments to avoid factors like delayed reporting, not having enough evidence, gaps in victim’s statements, and lack of cooperation with investigators in determining whether to regard a report as fake or real. The reasoning behind this advice holds that a lot of these factors are the aftermath of rape and the trauma that follows shortly after. Many sexual assault victims experience embarrassment and fear of being blamed and ostracized. It then becomes hard for survivors to talk about their assault in full detail. Many victims also don’t want to risk re-traumatization by answering the investigator’s questions. Many victims tend to form fragment memories during their assault due to the dissociation that could have occurred during the attack. Although the FBI does offer this advice, these guidelines are yet to be enforced and be considered mandatory and therefore become ignored and set aside by the criminal justice system. It is from this ignorance that police departments use these such factors as direct evidence to declare a report as fake, overturning the bravery women are working to uphold and create for future generations. From this lack of enforcement and ambiguous definitions surrounding false allegations, various reports become labelled as fake.

Once again looking at the statistics, it becomes evident that false rape accusations occur less frequently than the media hints at. In a given scenario, let’s say a false rape report was filed; what will happen then? The likelihood of that person being convicted and imprisoned still remains highly low. Out of every 230 rapes reported; while only 46 be will be arrested, 4.6 will be imprisoned. Rape crimes, among many others, exist as the least accountable.

Might it be due to the never-ending predominance of misogyny? It is certainly ironic how the only time some people choose to speak up on the topic of sexual harassment happens to be when a man will have to deal with the negative repercussions. Be that it really is due to misogyny, people should still be focusing on the issue of sexual assault itself, and if more of us did, it would be better known that men themselves are more likely to get raped than be accused of false rape. This statement exceeds small proportions as well; men are 230 times more likely to be assaulted than be falsely accused. The issue of assault affects more than just women, it plagues society. Even if people start to care for preliminary for the sake of men; we should be drawing more of our attention to sexual assault. We need to be destroying rape culture instead of using rare instants to encourage the stigma of women lying about their assault.

False rape accusations need anything but constant promotion because as it turns out when false accusers are found guilty, they do indeed get sentenced. In some cases; women have even gotten falsely prosecuted for being false accusers. In 2008, an 18-year old Marie reported her rape in Washington and was later found guilty of lying due to inconsistencies in her police report. Once again touching base with how survivors cope after incidents of assault, the inconsistencies in the report were most likely the cause of the traumatic side effects and as advised, should be excluded as factors in seeking or tossing validity. As one may predict, Marie was ruled to be under probation for a whole year. Two years later; the same man Marie accused finally was arrested and tried as a rapist. The police also found a photo undeniably revealing Marie as one of his victims. Marie was not only raped but tried as a liar! In want of support and justice, she instead was greeted with distrust, cynicism, and punishment. Like Marie, all many survivors ever want is to see their rapists in jail, fairly and as it should be. Unfortunately, Marie ended up incriminated as a result of a failed criminal system: the system failed Marie. Assumptions regarding false rape accusations as something prevalent in today’s society only bring about harm and suffering to sexual assault victims.

Believe women. Believe women who use their last bit of courage to go under oath and talk about their horrifying experiences in courts full of people. Believe women who go through painful rape kits – kits that will most likely end up sitting untested in police storages. This society doesn’t really care about actual cases of rape: it doesn’t care about women. The public rather focuses its attention on men whose integrities are under question due to sexual assault than focus its attention on the women who are being deprived of every sense of their intimacy. Let’s start believing women and put a stop to labelling women as a fake accuser when they seek righteous justice. It isn’t even statistically possible to make that argument; the cases of false rape accusations is way too low to be assuming that every woman who reports rape is a fake accuser. We have to start believing in women— ALL women. This is the least we owe to all sexual assault survivors.

A 3rd year poli sci major who enjoys creating poetry and enjoying all other forms of arts.I hope to use my voice to be able to change at least one person's mind and help them to start supporting women as well.Even that itself is a huge accomplishment.