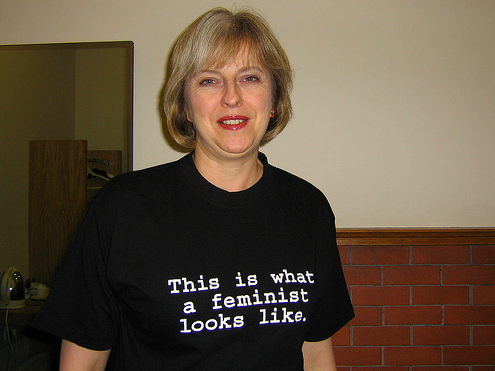 Theresa May is not what a feminist looks like.

After the results of the snap election came out seat by seat last night, it turns out that ‘strong and stable’ Theresa May was short of a majority. If you don’t understand the British electoral system properly, a party needs 326 seats for a majority to win the election. With Labour gaining 29 seats and the Conservatives losing 12 seats, it left them short of their majority, showing just how terrible and unsuccessful Theresa May’s campaign was. Jeremy Corbyn, the Labour leader, said that he has “changed the face of British politics” after increasing the number of Labour seats in Westminster and leading an incredibly successful campaign.

It should worry all of us that our Prime Minister is doing deals with a party that has strong historical links with terrorist groups such as the Ulster Resistance group. The Conservative campaign and right-wing media focused extremely heavily on portraying Corbyn as a ‘terrorist sympathizer.’ This is not just blatant hypocrisy from Theresa May and her Tories, it’s almost embarrassing.

So why is Theresa May still clinging to power by doing deals with a party so heavily against abortion, LGBT rights, same-sex marriage and a party that doesn’t believe in climate change? The despicable party I speak of is the Democratic Unionist Party of Northern Ireland, an extremely right-wing party that gained 10 seats in the election and would give Theresa May and the Conservative party a majority to win the election.

It’s overwhelmingly ironic that Westminster received a record-breaking number of female MPs while Theresa May does deals with an overtly misogynistic party.  What’s incredibly formidable is the fact that abortion is still illegal in Northern Ireland, and women wishing to get abortions must travel all the way to England and pay for the procedure.

What’s also still illegal is equal marriage and Theresa May bringing the DUP into a coalition government with her legitimizes all of this and essentially depicts it as ‘ok.’

This is not only the most formidable news for women but for the whole British population. When Theresa May said there would be a “coalition of chaos,” she failed to mention that it would be the Conservatives and the DUP, not Labour, the Liberal Democrats and the Scottish National Party.

If one conclusion has come from Theresa May doing deals with the DUP, it’s that she’s still thirsty for power and will go to any extreme for it.

“I am ready to take Britain forward” says May. However, it seems as though she’s taking the country centuries back. Not even Conservative voters voted for a coalition with the DUP.

It’s Okay To Not Be Okay