My parents gave me a present last week while we discussed what I’ll need to bring to college when I start classes next month.

“We wish we didn’t have to give this to you,” they told me, “but you just never know.”

They handed me pepper spray.

Pepper spray? For college? I knew what they wanted me to be able to protect myself from, and I had statistics swirling around in my brain, but I reminded myself that colleges and universities are obligated to take some action on sexual assault under Title IX.

The 1972 law prohibits sex discrimination under any education program receiving government financial assistance, and 2011’s “Dear Colleague Letter” outlines how colleges and universities should take specific action on sexual abuse. Schools must publish a notification of anti-discrimination policies and a grievance procedure detailing the complaint, investigation, and disciplinary process for sex discrimination or sexual harassment; the process is expected to be prompt and it is recommended that an investigation starts within 60 days. They are also obligated to use a “preponderance of evidence” regarding sexual harassment or assault, meaning that they must assume it is more likely than not that the crime occurred.

Schools must also use a “preponderance of evidence” mindset regarding sexual harassment or assault, meaning that they must assume it is more likely than not that the crime occurred. (For a complete breakdown of schools’ obligations under Title IX, click here.)

I told my parents not to worry, promised never to leave campus alone, and put the pepper spray in my backpack. I didn’t think much more of it after that.

In January, the new Secretary of Education, controversial due to her lack of experience within public education as well as her refusal to explicitly protect LGBT+ and minority students, said it would be “too premature” to commit to the guidelines laid out in Title IX on campus sexual assault.

Then, last week, DeVos met with “men’s rights” groups to discuss the policy. According to Rantt, those organizations included Stop Abusive and Violent Environments (SAVE), which has been labelled “misogynistic by the Southern Poverty Law Center, and the National Coalition for Men, a group that outs women whom they consider ‘false victims’ of sexual assault.”

“She’s meeting with groups and individuals today who believe that sexual assault is some sort of feminist plot to hurt men,” said Mara Keisling, executive director of the National Center for Transgender Equality.

Candice Jackson, the top civil rights official within the Department of Education, espouses the same dangerous rhetoric as these misogynistic groups. She told The New York Times that 90 percent of campus rape allegations “fall into the category of ‘we were both drunk, we broke up, and six months later I found myself under a Title IX investigation because she decided that our last sleeping together was not quite right.’” She later apologized for these claims, but DeVos refused to state whether or not she agreed with them.

Laura Dunn, founder of advocacy group SurvJustice, said that the group was “deeply troubled that [Jackson’s] apology does not admit how rare false reports are or admit how widespread the issue of campus sexual violence actually is based on research.”

But that’s not the end of it: Jackson’s top priority seems to be not victims, but the perpetrators. She wants to reform how students — most of them male — are treated when they are accused of assault. She also received a support when she told a group of universities’ attorneys that the Obama administration tended to “overreach” and intentionally punish or humiliate colleges in cases of sexual assault.

If she and DeVos are working together to change Title IX, we can only expect dangerous regression.

According to the National Sexual Violence Resource Center, only between two and ten percent of rape accusations are false. Not only do Jackson’s lies perpetuate rape culture, they also devalue the experience of rape survivors in an effort to protect rapists and abusers from having to face consequences for their actions.

Some activists now fear that DeVos will call for loosening colleges’ responsibilities in cases of campus sexual assault. As a 5’3″, 100-pound female who will start school in August, that prospect terrifies me.

Because one in 5 women and one in 16 men are sexually assaulted while in college, and 90 percent of victims don’t report a campus assault.

Because rates of sexual assault, harassment, and abuse at colleges are highest among undergraduate females. Freshmen are the most likely to be abused, with the likelihood of being assaulted decreasing slightly each year. 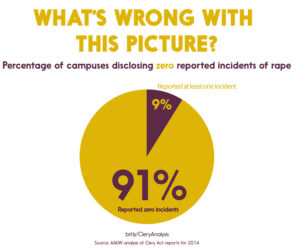 Because many colleges already handle campus rapes poorly, and while 74 percent of college presidents agreed that sexual assault is prevalent at U.S. schools, only 5 percent included their own institution.

Because 63.3 percent of men at one university who self-reported raping or attempting to rape someone admitted to committing assault repeatedly.

Because if we protect assailants before we listen to survivors, how can we expect the problem to get better? How can we expect victims to get help if we prioritize those who harmed them?

Some advocates now worry that DeVos will establish a new standard of proof rather than the “preponderance of evidence”— something that could be incredibly damaging considering how victims are already not taken seriously in our society and are instead met with a barrage of irrelevant questions about what they wore or how much they had to drink. 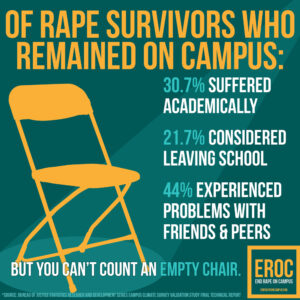 If colleges don’t support victims who need to get help and be separated from their abuser, potential assailants will have increased confidence to carry out a crime that robs survivors of their bodily autonomy and can cause them difficulty in school or leave them with lingering depression, anxiety, and PTSD.

If the responsibility to provide quick and informed access to help is removed from these institutions, then the percentage of victims who don’t report will likely rise even higher.

I don’t want to become another statistic while I’m trying to focus on my education, and if Betsy DeVos loosens Title IX, she’ll be making it clear that she doesn’t care if I do.

If you or someone you know has been raped or sexually assaulted, seek help by calling the National Sexual Assault Hotline at 800–656-HOPE (4673). For more information about sexual assault, visit RAINN, End Rape on Campus, Know Your IX, and the National Sexual Violence Resource Center.

Emily Rose Thorne
Emily Rose is 17 years old and from Athens, Georgia. Beginning in fall 2017, she will attend Mercer University to double major in Journalism and Political Science and to minor in Global Development Studies. A writer, musician, feminist, and vegetarian, she wrote and edited for her high school newspaper and is currently a staff writer for both Affinity Magazine and Women's Republic. She frequently posts on Medium, where editors requested to add her as a writer for their Politics Means Politics site, and on Vocal, where her writing has been selected as a Staff Pick. She has contributed to the Genetic Literacy Project and Sprout Literary Magazine. Emily Rose will spend the summer of 2017 as an intern for Step Up Magazine.