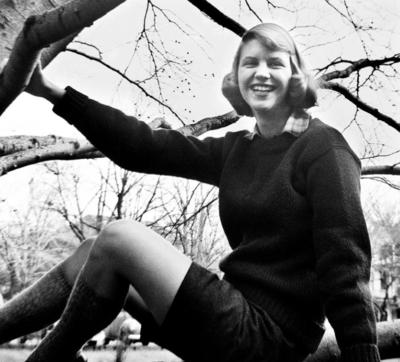 Out of the ash

I rise with my red hair

There is a very thin line delineating reality and an entirely imaginary world. Sylvia Plath walked that line with perfect grace in all her work.

Plath’s work is regarded as revolutionary in the sense that seldom was there a representation of the female perspective in literary circles. She remains one of the most dynamic, admired, and enigmatic poets of the 20th century.

Her poems reflect her own life; her constant rush to understand the world around her.

This is a celebration of the woman who set the world ablaze with powerful words that still echo loudly, unafraid, and strong as ever.

Who was Sylvia Plath?

Sylvia Plath was an American poet born on 27 October 1932 in Boston, U.S.A. She started participating in literary contests and competitions from an early age. Her first poem was published in the Boston Herald when she was just eight years old. In fact, she was published in various national magazines while still in her teens.

Throughout her life, Plath had to face multiple hardships, and these were inevitably reflected or alluded to her all her work. The sudden death of her father in 1940 inspired the widely known poem ‘Daddy’ which deals with her difficult relationship with him.

Through the span of her career, Sylvia Plath wrote well over four hundred poems. Her most famous works include ‘The Bell Jar,’ which is the only novel she ever wrote, and ‘Ariel,’ a collection of poetry that was published posthumously.

Plath battled with severe depression and bipolar disorder as well. She died by suicide in the year 1963. Her last weeks were consumed in a frenzy of writing.

Critics and readers over the years have said that Sylvia Plath’s work was rustic and unpolished. Yet, it is also sophisticated and complex, dealing with a mix of different emotions, ideas, and feelings.

Attempts have been made to understand her through her work by many scholars. Various books have been written about Plath and her writing style, the topics she covered, and how they were, in essence, the story of her own life.

On the World Socialist website, Margaret Rees writes, “Whether Plath wrote about nature, or about the social restrictions on individuals, she stripped away the polite veneer. She let her writing express elemental forces and primeval fears. In doing so, she laid bare the contradictions that tore apart appearance and hinted at some of the tensions hovering just beneath the surface of the American way of life in the post-war period.”

In the New York Times Book Review, former U.S poet laureate Robert Pinsky wrote, “Thrashing, hyperactive, perpetually accelerated, the poems of Sylvia Plath catch the feeling of a profligate, hurt imagination, throwing off images and phrases with the energy of a runaway horse or a machine with its throttle stuck wide open. All the violence in her work returns to that violence of imagination, a frenzied brilliance and conviction.”

Dictionary of Literary Biography essayist, Thomas McClanahan says, “At her brutal best—and Plath is a brutal poet—she taps a source of power that transforms her poetic voice into a raving avenger of womanhood.”

Personally, I believe Plath’s intention was not for us to understand her but ourselves. Understand our own state of mind rather than hers, just with the help of her words and creations. Or maybe this is just the wishful thinking of my selfish mind.

Here is one of my favourite poems by Plath:

Even the sun-clouds this morning cannot manage such skirts.
Nor the woman in the ambulance
Whose red heart blooms through her coat so astoundingly —-

A gift, a love gift
Utterly unasked for
By a sky

Palely and flamily
Igniting its carbon monoxides, by eyes
Dulled to a halt under bowlers.

O my God, what am I
That these late mouths should cry open
In a forest of frost, in a dawn of cornflowers.

In death as in life, Plath remains a mystery and her work a beautiful, complex labyrinth of emotions.

Read also:
Women Versus Imposter Syndrome
An Open Letter To My Amma
On Mad Women And Folklore