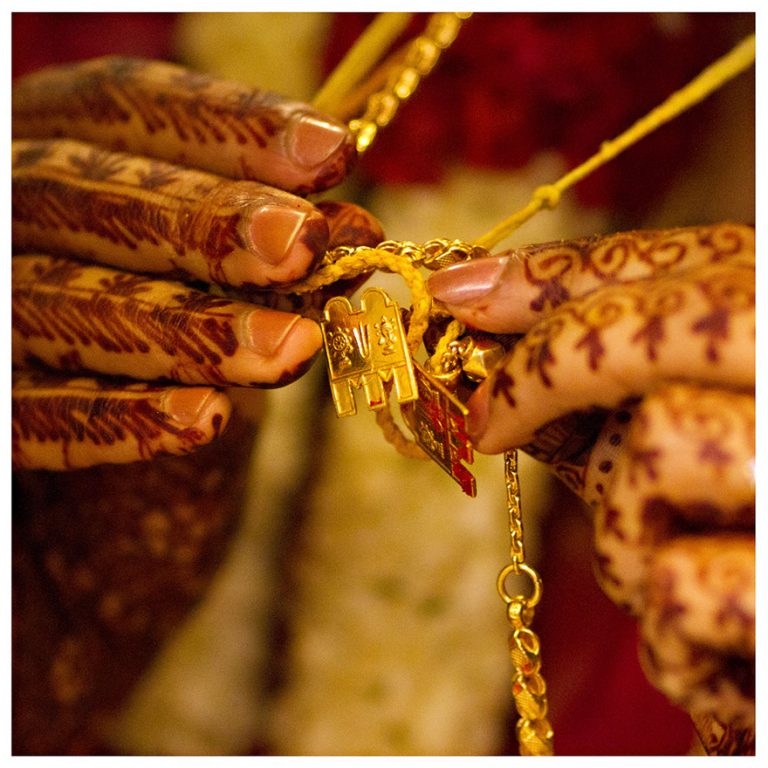 Draped in a bright red silk kancheevaram saree Long luscious black hair adorned with pleasant jasmine flowers Golden jewelry twinkled like stars in the sky She sat at the mandap like a goddess The Preist chanted holy phrases It was the happening moment! Too much going on…very overwhelming! Just then…like the calm cool winter wind…he leaned in… This moment…this very moment is what everyone has been waiting for… All the commotion came to a complete stop! As he leaned in to tie the mangalyaam around her neck… Everyone rejoiced in happiness…The venue was filled with nothing but joy! They are now Man and Wife!

That right there is the moment several brown women have been living since they were young girls. They are constantly taught that their wedding is the one day they should be excited. While that is a different topic and should be addressed in another article, I’d like to address the whole concept of the traditional wedding rituals and the hidden portrayal of casteism. Other than the whole traditional, sentimental and religious views associated with it the mangalsutra is mainly used to inform the society and strangers that a specific woman is married and technically “off-limits,” right? In reality, the south Indian Mangalyaam ( I’ll call it Thaali to keep it simple) is essential in identifying what caste the married woman belongs to.

In the 21st century, we often look beyond the whole ancient tradition of casteism and consider it sheer discrimination; however, many people of the current generation are still following age-old traditions through their purchase of the thaali during wedding ceremonies. While a few youngsters simply choose the design and model of the thaali they like, many of the thaalis worn by new brides are chosen by their parents according to their respective castes.

To completely understand the depth and complexity of this ancient tradition, I had to do some research. According to ancient scriptures, the south Indian mangalyaam (colloquially called a thaali) came into existence in the 11th century following its mention in the book Kanthapuranam written by the Tamil poet Katchiyappa Sivachariar. However, an ancient thaali was merely made out of a yellow thread that tightly held a turmeric piece in place. It was believed that the women who wore their thaali every day and adorned it with sindoor were guaranteed a husband with a long and healthy life. So much for the whole idea of exercise, nutrition and proper rest, am I right? Jokes apart, this is still continued to be quoted as the major reason why several females of Indian origin (specifically from the Hindu religion) wear a Thaali post-marriage.

This article isn’t about classifying the various kinds of thaalis and associating them with a specific caste, so I’ll refrain from doing that. No matter what caste the thaali portrays, at the end of the day, IT IS an indicator of caste. As citizens of a developed society who look beyond discriminatory factors like caste and religion; unfortunately, we still are subconsciously hung onto caste associated symbols like the thaali.

As mentioned previously the traditional thaali came into existence as a symbol of marriage (and caste) in the 11th century. Therefore, it did not exist prior to that yet, weddings still took place without it. This concept is a total game-changer since it overrides the idea that a thaali is necessary for a marriage union. Therefore, it is clear that the thaali came into existence merely as a symbol of caste.

Although modernization has caused several women to not wear a thaali on a daily basis, it is still a key factor in both Indian weddings and in displaying castes. In order to completely create a safe and inclusive society, we should really understand the hidden meanings behind our day to day activities that were passed on by our ancestors.

Srinidhi Balaji
My name is Srinidhi Balaji. I enjoy learning about various cultures, traditions and languages. Hope you enjoy my words as much as I enjoy writing them