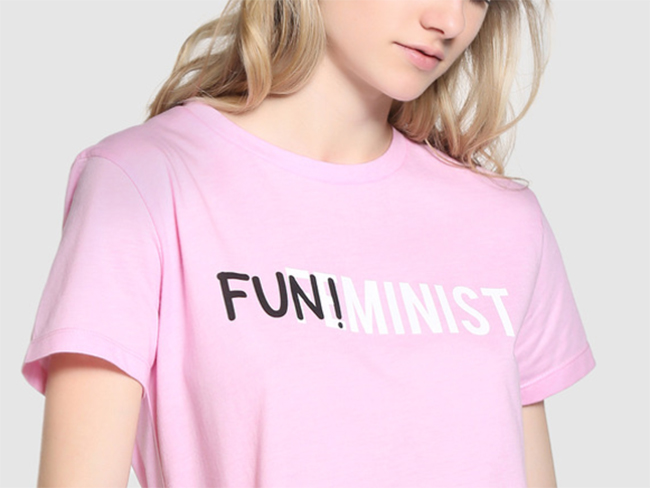 A couple of weeks ago, the most important Spanish department store, “El Corte Inglés,” released an extremely questionable t-shirt. Imprinted on the pink shirt, you could see the word “FEMINIST” written on white, but on top of the letters “FE” you could read the word “FUN!” written on black lettering.

The department store hasn’t released any statement regarding this matter, even though it’s been questioned all over the internet.

We cannot accept a shirt that says that feminist women are not “fun,” but rather the stereotypical angry or boring women, is out there for girls and women to purchase it.”

It’s actually quite controversial the whole mercantilization that feminism has experienced these past few years. Being a feminist is a “trend” and the system knows how to take advantage of every trend. It just sounds right for both males and females to define themselves as feminists, even if they haven’t really put much thought to what being a feminist means. Shirts, bags, tattoos and pictures with the words “Feminism,” “GRL POWER,” “Sorority,” “Empowerment” and so on. Just look nice, so people go and buy them.

The mainstream fashion industry doesn’t treat us very well: the production starts in third-world countries where women are exploited by the million to sew the clothes we wear – even the clothes that claim to stand up for women’s freedom and rights. The models usually have a very particular body type that makes us feel terrible, the very own models suffer from eating disorders in their effort to keep working for the industry, and overall the fashion industry is not the biggest supporter of women’s liberation.

I encourage you to check out the work some feminist organizations do to support themselves or brands created by women and for women, who can really understand our story and our fight. This way we can be sure they’re not exploiting women on the production line and are not selling those clothes just for the benefit, but also to spread our feminist words.

Surely we aren’t all funny, but feminism is not a joke. Being a feminist is not a trend, it is just so much more than that. Let’s never forget it.

Clara Manrique
Clara Manrique is an 19-year-old girl who loves reading, writing and talking. She is studying to become an Elementary School Teacher as she believes it's only through education that we can change the world.