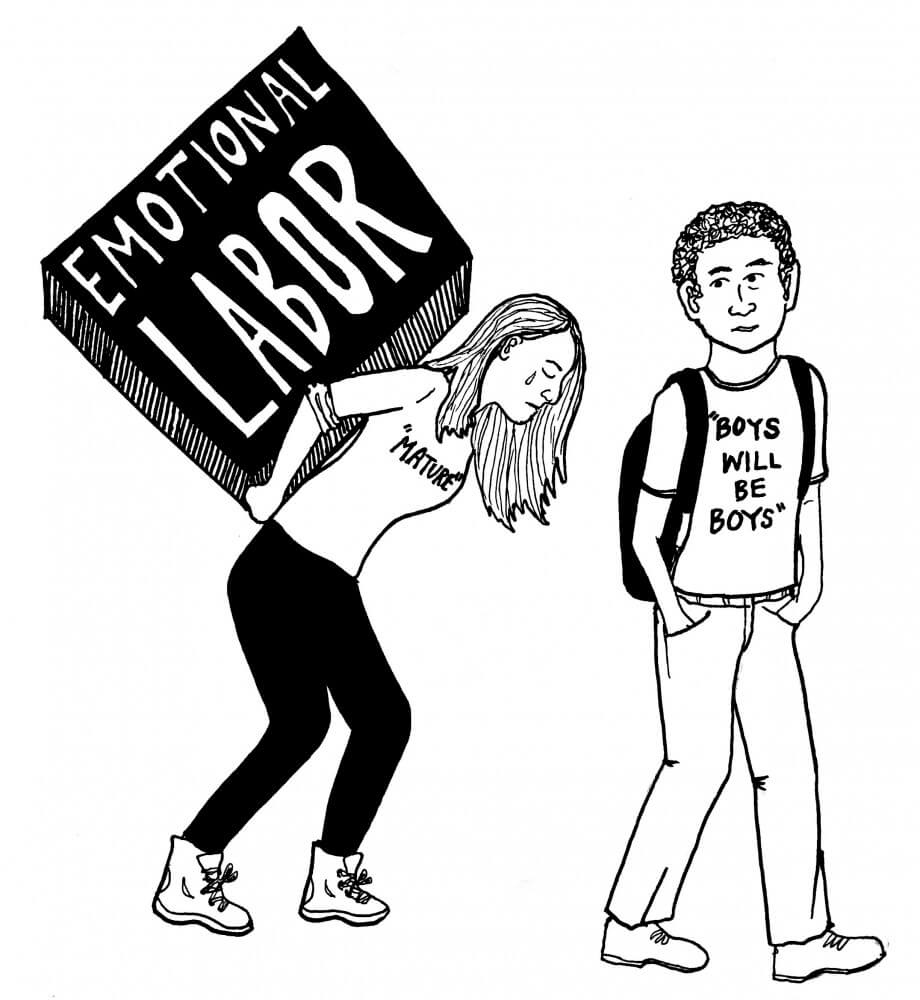 When I was six years old, my first-grade teacher gifted all the girls in the class roll-on lip glosses.  Some girls received a peach-scented, sparkly gloss, while others, like myself, were graced with our first entry into adulthood: a cherry, rose-tinted gloss.  For as long as I could remember, I watched the women in my life apply deep red lipstick, a sign of beauty and class. So, naturally, when I arrived home from school that day, I proudly displayed my cherry lip gloss on the kitchen counter, making everyone well-aware of my new prize.  But when my father came home and saw the innocent tube of lip gloss, he shook his head with disappointment, telling me I couldn’t wear it because it would “attract the boys.”

At 14 years old, I almost made it out of the house and to a party wearing a spaghetti-strap top and shorts.  Almost. My parents pulled me aside and warned me, “You shouldn’t wear this outfit because boys will look at you in an inappropriate way.”

Today, at 17 years old, I subconsciously think about how my clothing will be received by others before I ask myself whether I like it.  I avoid walks in my neighborhood and trips to the beach after sundown, and never enter an unfamiliar social setting alone. My inclination to first consider how my choices will affect those around me go as far back as first-grade.  Too often, we are told that “girls mature faster than boys” and that girls are responsible for minimizing male attention, protecting themselves from sexual harassment, and making decisions to keep those around them comfortable. However, the societal standard that women are “fast” couldn’t be further from the truth.

In order to understand the maturity myth, we need to ask ourselves what maturity is in the first place.  A quick Google search will tell us that maturity is the state of being fully developed. While I did stop growing in height earlier than my brother did, we tend to favor the emotional and social definition of maturity.  Maturity is viewed as our ability to understand the social environment and act accordingly with societal norms. Therefore, to believe that girls quickly achieve a state of maturity is assuming that girls can handle emotional responsibility at an earlier age and that boys can be excused from harmful and irresponsible behavior because they have yet to adapt to social norms.

In 2015, when Brock Turner sexually assaulted Chanel Miller while she was unconscious, his lawyer and parents claimed that he was just young and immature, perpetuating the idea that “boys will be boys.”  Apparently, the court agreed. After serving only three months, Turner was released from jail with three years of probation. On the other hand, Miller was treated with little empathy right from the start.  In her court statement, Miller stated that she was interrogated with the questions, “How much did you drink?  What were you wearing? Why were you going to this party? Were you wearing your cardigan? What color was your cardigan? Do you remember any more from that night? No? Okay, we’ll let Brock fill it in.”  Described as a “game of strategy,” society’s attempt to cover for boys has disgraced the emotional and mental wellbeing of women.

Even further, look at our President.  When the Washington Post published a 2005 “Access Hollywood” recording of Donald Trump boasting about groping women in October 2016, Trump apologized but shrugged off his former remarks, claiming they were mere “locker room talk.”   One month later, Trump won the Presidential election. The effects of condoning irresponsible behavior by men go much further than sexist remarks on a daily basis; it goes as far as accepting and electing a President that speaks casually of sexual assault.

Rape culture is endemic in societies across the world.  Despite reactive measures such as passing legislation to protect victims of sexual assault, societies have taken a few proactive steps to prevent assault in the first place.  It starts in homes and the way we raise our children. Instead of telling girls that they are mature and able to handle the behavior of boys, we should be holding men accountable for “immature” behavior.

However, many still believe that telling young girls they are mature is a compliment.   On the surface, it may seem to be a good thing when girls are quiet and reliable. The problem is that this generalization amounts to benevolent sexism, where we make assumptions about girls and women which seem nice but are still sexist.  Calling girls mature solely because of their gender still perpetuates a stereotype. And whether we believe it or not, there is no such thing as a positive stereotype because stereotypes always lead to expectations. We expect girls to know how to act in every social situation, and that they should be able to tame the “wild” behavior of boys.

This stereotype that women should be calm and cool-headed puts women in a submissive place in society.  We wonder why women are reprimanded for being assertive and teased for showing emotions, yet most of us have subscribed to the maturity myth at one point in our lives.  It’s time that we understand that individuals are only responsible for their own behavior and not obliged to take care of the immaturity of others.

Girls are moving at exactly the right pace.  Teach your sons that disrespecting women is not something that can be excused just because they’re young and foolish.  And one day, tell your daughters to wear their favorite cherry lip gloss if they’d like, that they deserve to see the world even after the sun has set.