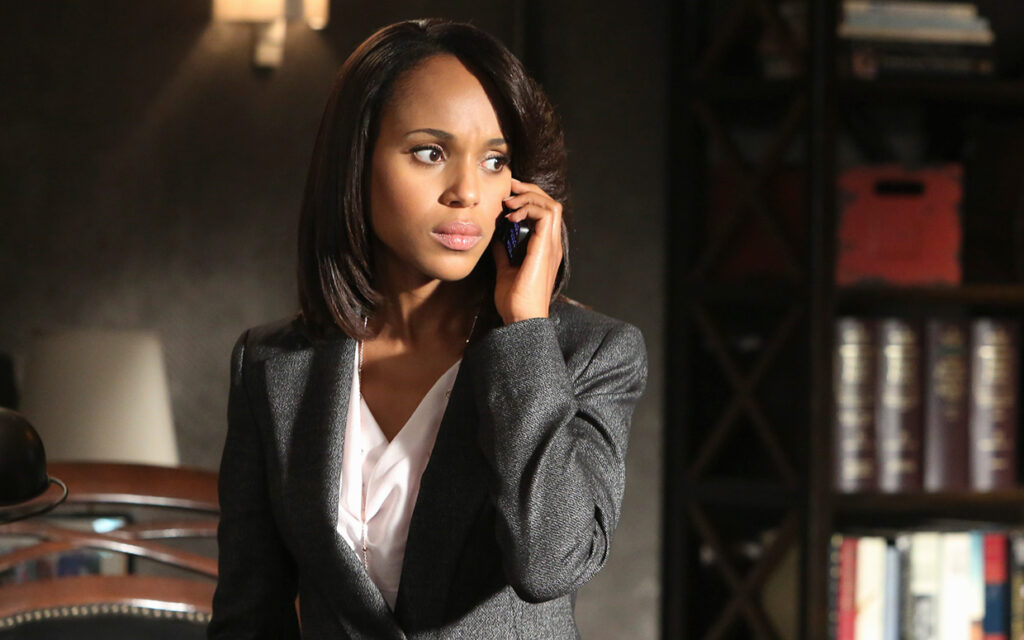 Olivia Carolyn Pope is the lead female character on the ABC drama series Scandal-another one of Shonda Rhimes outstanding hits. The fact that the role of Olivia is played by Kerry Washington, a black female, is a win for representation-and Ms. Rhimes does not hesitate to incorporate those elements into her show. Shonda Rhimes takes all possible opportunities to spread awareness of issues that marginalized groups-such as those which Kerry pertain to-face. She does this not only through Scandal, but also through her other widely acclaimed shows: Grey’s Anatomy and How to Get Away with Murder.

For the first three seasons or so of the program, I found myself admiring Olivia and wanting to be just like her. How could I not? She held the White House-and what seemed like the entire nation-on the tip of her finger. As a crisis manager, she always seemed to cater to her clients every needs. No matter what scandal she was going through in her own life-and oh boy did she always have something going on-she never hesitated to push her issues aside in order to resolve everybody else’s.

Seeing such a powerful character on television inspired me, especially considering the fact that she was female and pertained to a minority group, just like me. Her character truly gave me hope to make something grand of my life; to no matter what, always keep moving.

I would remain awe-struck just at the fact that Olivia was stronger and evidently held more power than the white men that surrounded her. She defied all expectations and with the feeling in her gut, which she became so famous for, always “handled” things. She became famous for the metaphorical white hat that she wore; for always being the bigger person and thinking things out rationally.

However, with time, Olivia’s once-so-clear moral borders began to disintegrate. She began to go from being the bigger person to simply doing whatever she believed she needed to in order to survive. She went from being the big dog to being the little dog.

Now, that being said, there are many things that can be attributed to Olivia’s downfall. For starters, she was never actually whole to begin with. It is evident from the very beginning of the show that Olivia is in love with her (very married) President, Fitzgerald Grant III. Throughout the entirety of the show, Fitz manipulates Olivia into doing what he wants. He grants her sex in order to get her to comply with his wishes. The same occurs with Jake Ballard. No matter what would occur between her and Fitz or between her and Jake, Rhimes somehow always managed to allow Olivia to go back to them; to forgive them. Moreover, Olivia simply just has a tendency to abandon the values that she exhibits in all other aspects of her life, when dealing with men.

Through Olivia, the writers of this show are demonstrating to young girls watching the show that they can be powerful-they just can’t be more powerful than their attractions towards a man. This is a terrible message to send! Although this show definitely has some admirable qualities, and Olivia does show control over her feelings on at least some level, Rhimes took what could have otherwise been an outstanding, monumental character, and allowed her to fall into the usual stereotypes that other female characters on modern TV tend to fall into as well.

But why focus on such a small detail? Well this is not the only problem with Scandal‘s plot. As I previously mentioned, Olivia’s once-so-admirable qualities are barely evident anymore. After her kidnapping, she seemed to go on a downward spiral-and it still has not stopped. She became selfish and the line between right and wrong suddenly became unclear for her. This is transparent when she slams former Vice President, Andrew Nichols, to his death with a chair from his confinement room in Season 5 episode 17. I was, without a doubt, shocked. However, I was shocked even further in the Season 5 finale when Olivia accepted her role as the new Command. It was truly horrifying to see Olivia become the very thing that she had once detested so strongly. It was even more horrifying being brought to question whether it was possible to be who she used to be-who I want to be-after all.

Don’t get me wrong, Shonda Rhimes is a genius and I praise her for always hitting me where it hurts, but she took a character that could have truly changed the world and transformed her into something that could potentially be dangerous.

Let’s just hope there isn’t a young girl who falls so deep in admiration for Olivia Pope that fails to see her faults and aims to be the real-life her. Let’s hope that the audience recognizes that they can be better than Olivia; that Olivia is not the epitome of feminism and that they should not seek to be like her. Let’s hope that we are raising a new generation of women who do not abandon their morals in the face of chaos, as Olivia has.

Lizbeth Aparicio
Lizbeth Aparicio is a 16 year old girl from Miami. She enjoys anything writing, psychology, and ABC drama-related. She can be contacted at lizbethaparicio10@gmail.com.