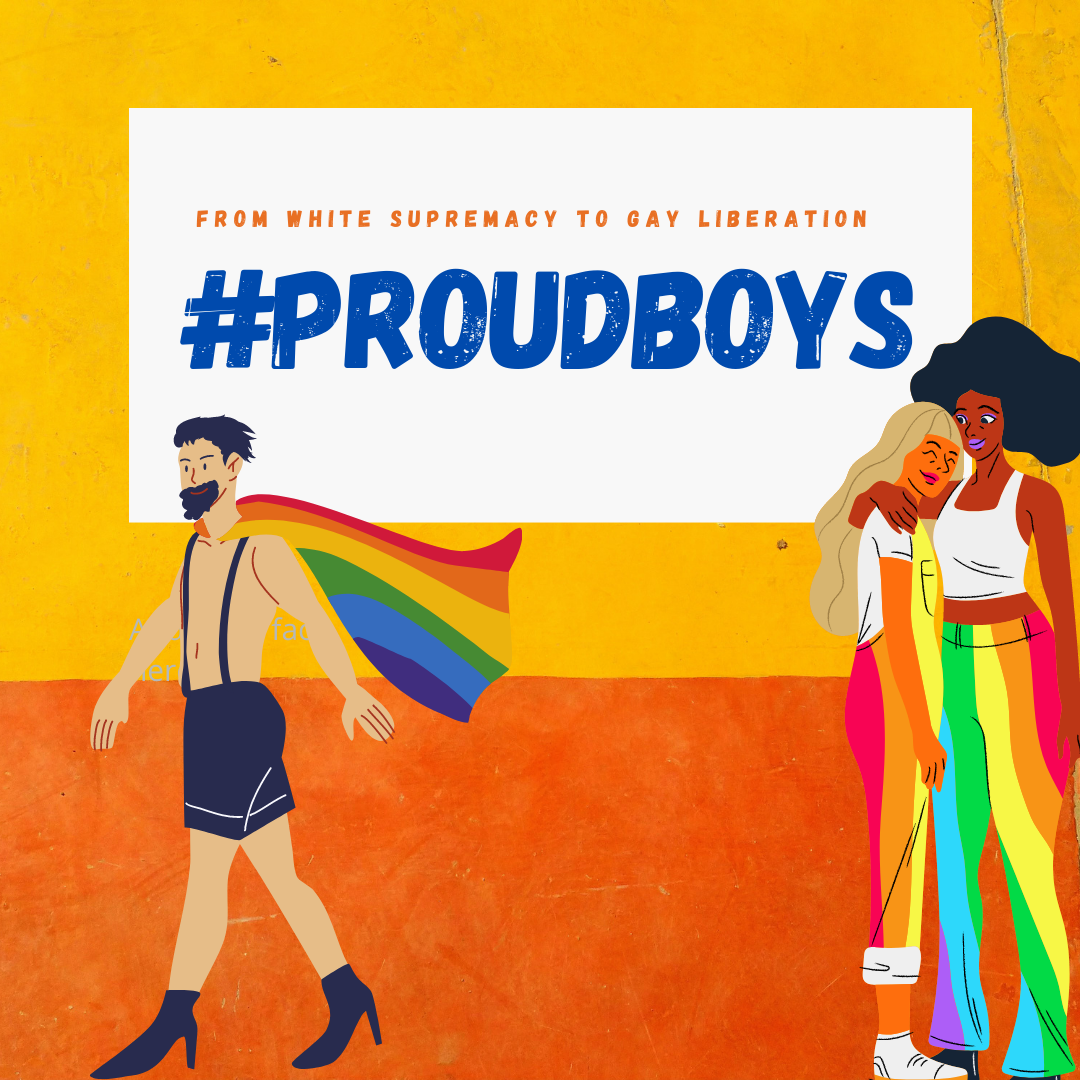 Since the mention of “Proud Boys” in the first 2020 Presidential Debate, the organization has gained national visibility. With thousands of gay Twitter users spreading the hashtag #ProudBoys as a reclamation of love against hate, two opposing political groups emerged. Celebrities such as George Takei and Bobby Berk are just a few of the influential participants of the #ProudBoys take-over. The Proud Boys, a far-right “western chauvinist” organization, was founded in 2016. Since its conception, the organization has been associated with overtly racist figures. They have also been involved in violent confrontations and been labeled a hate group by the Southern Poverty Law Center. In retaliation to the flood of images and messages displaying happy queer couples, the organization took to their official account on Parler, a notoriously conservative extremist social media platform. Here’s why this matters:

Who are the Proud Boys?

The “Proud Boys” were founded by Gavin McInnes, previous VICE Media co-founder and partner of Canadian far-right channel, Rebel Media. McInnes uses his platform, “The Gavin McInnes Show,” to empower young men and discuss topics such as: “western culture is superior, racism is a myth created by guilty white liberals, Islam is a culture of violence and feminism is about de-masculinizing men.” Spreading anti-Muslim, transphobic, and misogynistic rhetoric, McInnes stated, “Maybe the reason I’m sexist is because women are dumb. No, I’m just kidding, ladies. But you do tend to not thrive in certain areas” during The Gavin McInnes Show in 2017, followed by “I’m not a fan of Islam. I think it’s fair to call me Islamophobic” on an NBC interview that same year.

Though the current leader, Enrique Tarrio, claims the group has “longstanding regulations prohibiting racist, white supremacist or violent activity,” the actions of the group do not express such sentiments. The Southern Poverty Law Center has been actively warning the public about the group’s violent tendencies for years, falling on deaf ears. SPLC cites the connection between President Trump’s 2016 victory to Proud Boys’ dramatic rise in membership and visibility. The group’s very first public outing was at a pro-Trump art show, where McInnes displayed photos of himself as a white slave. Today, a MAGA hat continues to be a staple attribute of a Proud Boy member.

The first Presidential debate of 2020 on September 29th raised quite a few concerns across the board. Jumbled within an evening of mayhem, confusion, and outright lying, President Trump managed to enrage anti-racism activists with his refusal to denounce white supremacy. The moderator, Chris Wallace, repeatedly asked Trump to condemn white supremacists and militia groups to the 73 million debate viewers. The exchange went as follows:

“WALLACE: You have repeatedly criticized the vice president for not specifically calling out Antifa and other left-wing extremist groups. But are you willing, tonight, to condemn white supremacists and militia groups and to say that they need to stand down and not add to the violence in a number of these cities as we saw in Kenosha and as we’ve seen in Portland? Are you prepared to specifically do that?

TRUMP: Sure, I’m prepared to do that. But I would say almost everything I see is from the left-wing, not from the right-wing. If you look, I’m willing to do anything. I want to see peace.

WALLACE: Then do it, sir.

TRUMP: Proud Boys, stand back, and stand by. But I’ll tell you what: Somebody’s got to do something about Antifa and the left. Because this is not a right-wing problem — this is a left-wing problem.”

Why is this important?

The Department of Homeland Security stated white supremacists will remain the most “persistent and lethal threat” to the country. But Trump has, yet again, downplayed the severity of our racial climate. Trump’s “stand back and stand by” assertion left the Proud Boys feeling excited, and some argue, endorsed. Megan Squire, a computer science professor at Elon University who studies online extremism, told USA TODAY, “A call-out like this, it validated what they already fantasized was their purpose.”

Joe Biden highlighted the group’s response with a Tweet stating, “This. This is Donald Trump’s America”, attached to a screenshot of participating members’ declarations. Biden’s running mate, Kamala Harris, tweeted, “This isn’t the first time he’s [Trump] been an apologist for racists. This is a pattern. When someone shows you who they are, believe them the first time.”

As Proud Boys are banned from Twitter, a prominent group member named Joe Biggs took to Parler, exclaiming, “Trump basically said to go fuck them up! This makes me so happy” and “President Trump told the proud boys to stand by because someone needs to deal with ANTIFA… well sir! We’re ready!” Enrique Tarrio followed suit with the powerful statement, “Standing by sir.”. Not only has Trump hesitated to denounce racism, white supremacy, and misogyny, he has fueled Proud Boys’ fire, empowering and verifying their existence.

What will happen next?

Though the public is now aware of the violence, hate, discrimination, and intolerance associated with this organization, what can we expect for the future? With a President who refuses to condemn white supremacy, let alone an organization that directly endangers his own citizens, this movement cannot be over. In the words of the Southern Poverty Law Center, “SPLC will not ‘stand-down’ to hate groups. The threat is too serious to just ‘stand by’” and neither can we.

Read also:
An Open Letter To All Those Who Believe “All Lives Matter”
Why Is Police Brutality Still An Issue In 2020?
How Reclaiming My Culture Helped Me Love Myself

What It Means To Be A “Feminist” Character