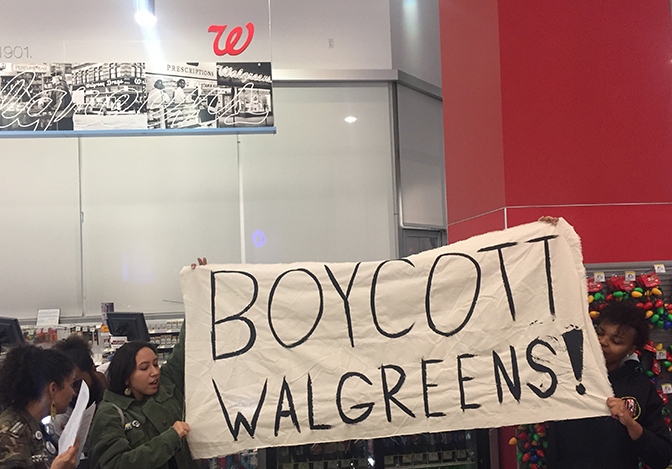 On the radio, there are cute commercials for Walgreens, advertising upcoming deals for chocolates in a friendly, neighborhood way. Online one can see that CBD oils will be sold by Walgreens in the next year. As a fan of both, I might be intrigued if I was not aware of how violent the corporation really is. Although the promotions for Walgreens desperately cling to a fallacy that they care about its customers as people, this could not be further from the truth. I have personally seen Walgreens’ pharmacists be incredibly condescending to my friends who come to them for prescriptions to aid their mental health or for contraceptive reasons. However, this is not to say that everyone who works at Walgreens is condemnable. Rather the issue with Walgreens lies within the company itself and a policy that hurts far more people than it helps.

In the summer of 2018, Nicole Arteaga discovered that she would have a miscarriage 9 weeks into her pregnancy. For reference, at 9 weeks a fetus is the size of a cherry and the doctor had told her the fetus had stopped developing. Although miscarriages are rarely discussed, they are incredibly common. 1 in 4 pregnancies result in miscarriages, and the probability can increase based on age and medical history. In this case, Nicole Arteaga did not want a miscarriage but there was nothing she could do. She was told that she could either have a surgery or take a pill to complete the process at home. As most people would, she chose the prescription to handle her misfortune in the comfort of her home surrounded by her loved ones. Considering this, imagine her surprise when she was denied a medication prescribed by her doctor in front of her child and other customers.

After Arteaga left Walgreens in tears, Walgreens supported the male pharmacist, in an email statement to CNN they noted that their policy “respect[s] the sincerely held beliefs of [their] pharmacists..allow[ing] pharmacists to step away from filling a prescription for which they have a moral objection.” Walgreens and Trump agree on this discrimination, as the Trump administration has just issued a rule allowing for health care providers to do the same. Walgreens justifies this abhorrent policy by emphasizing that the patient will be referred to another pharmacy. Yet these rejections of prescribed medications are unacceptable considering the time and effort it takes for someone, especially someone undergoing a miscarriage or other medical issue to navigate to a completely different location, just for someone else to deny them. The policy of Walgreens is disguised as a notion of respect, yet it ultimately disrespects people’s autonomy over their own bodies, and disproportionally affects those that might not have the funds or the ability to travel all over a city to find a pharmacist to do their job correctly.

As of 2013, Walgreens stated publicly that birth control and contraceptives would be indefinitely provided. This statement was in reference to the multiple instances of people being refused contraceptives and birth control in various states that was addressed by the American Civil Liberties Union. Walgreens mentioned the disconcerting policy in their defense, noting that although it was their policy to fill every prescription, birth control medications as well, that they will continue to allow pharmacists to publicly reject those that they disagree with. After the ordeals that many have gone through, it is clear Walgreens has chosen its side as we continue to fight for women’s complete autonomy worldwide. Additionally, those that do not identify as women are also hurt by this policy. The United States is a country that claims to value freedom yet is rapidly imposing more restrictions on all people who are able to get pregnant. Criminalizing abortions leads to not only unsafe abortions but deaths that could have been prevented when someone is forced to continue an unviable pregnancy.

From what we have seen this year, the incidents at Walgreens reflect their disturbing desire to manipulate those who want control over their own bodies and lives. It is especially critical to not support Walgreens in 2019 after Planned Parenthood has reported that “over 250 bills restricting abortion have been filed in 41 states” with “nearly half of all those bills…aimed at banning abortion in some or all circumstances.” Further, there are 6 states in the United States that have a single abortion provider in the entire state. Even more frightening, the amount of six-week abortion bans introduced in the past year has increased by 62.5%, despite most people just finding out they are pregnant at this time.

Indeed, there are a number of reasons to stop supporting Walgreens, such as the murder of Jonathan Hart inside its store in Los Angeles, the company decreasing health insurance and time off for employees, the FDA reporting that the chain sells more tobacco to minors than any other, lawsuits over people receiving incorrect medications, or its recent settlement of overbilling federal healthcare programs and most likely many more. Walgreens has repeatedly hidden behind a policy that actively hurts vulnerable communities, notably women and the LGBTQIA+ community. As stated above, the other atrocities of Walgreens only give us more reasons to not support this company. In 2019, a year many of us thought we would be more progressive than any other, we have seen countless threats towards people’s basic autonomy. We have not learned from countries like Ireland, which overturned its abortion restrictions after growing protests of women dying, notably Savita Halappanavar who was denied an abortion that would have saved her life, after learning a miscarriage was inevitable. She later died of a septic miscarriage. Not only has this created change, but inspired young women to fight for their place in politics. This is a trend that is global and will not end, much to the chagrin of the privileged. Ireland and the United States, like many countries, still have a lot of work to do. Without putting in the work to protect autonomy, more lives will be lost. We have already discovered that #ProChoiceIsProLife.

On behalf of Women’s Republic, we appreciate those who have spoken out about injustices that they and others have faced, as we all work towards a better future together. A future where none of these situations happen.

Tweet
#Boycott#Walgreensautonomyfeminism
Previous ArticleDo You Need New Friends?Next ArticleDon’t Make Us Choose Between Two Predators: Biden Is Not An Option